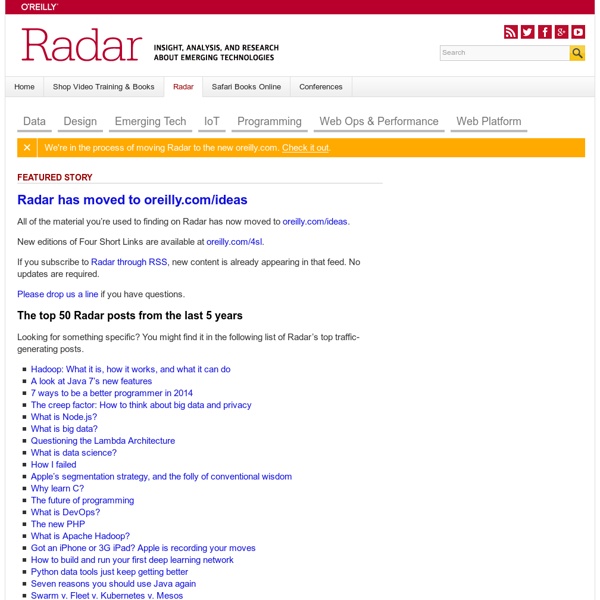 Biology as I/O Solid's long view includes biology as part of the creator's toolkit. Tim O’Reilly subjected himself to an engaging Ask Me Anything session on Reddit earlier this week. The focus of the exchange was the Internet of Things, in anticipation of our Solid conference taking place next month. We’re always listening for faint signals from our community about what they’re getting interested in, and one area that’s stood out to us is biology, which is becoming easier to experiment with at home, as a hobbyist, and through hackerspaces like Biocurious and Genspace. You’ll find a few threads on biology at Solid this year, but we’ve tagged it to be a little more central at Solid 2015.

Build a trail by Claire Wolfe 91 You can turn a "useless" piece of land into a useful one and create something beautiful by building a trail in your backyard. It doesn't even matter whether you have a lot of land or just a small scrap of nature. In my case, my useless patch was a mere half acre choked with blackberry brambles and other largely impenetrable weed species. Vladstudio.com - free desktop wallpa How to optimize Photoshop CS2/CS3 settings for icon design Here are my thoughts about designing icons in Adobe Photoshop: - many respected icon designers consider Illustrator better tool to design icons - . I do not own or know Illustrator, but I'm pretty good at Photoshop, and I found that it can be tweaked to create icons fast and easy too. - the best way to design icons (even in small sizes) is vectors. In Photoshop, they are made with Shape and Pen tools.

On Sale At Last: Twine, Your Gateway To The Internet Of Things A year ago, two MIT Media Lab graduates raised half a million dollars on Kickstarter to create Twine, a cigarette-pack-sized chunk of Internet magic that promised to turn any object in your home into a web-connected, interactive "smart product." Want your basement pipes to send you a text message when they’re in danger of freezing up, or your garage door to ping you if you forget to close it? No problem: With Twine, building your own personal "Internet of things" is supposed to be easier than programming a VCR. And now that the product is available for purchase, it looks like creators John Kestner and David Carr have very nearly delivered on that ambitious promise.

What is data science? We’ve all heard it: according to Hal Varian, statistics is the next sexy job. Five years ago, in What is Web 2.0, Tim O’Reilly said that “data is the next Intel Inside.” But what does that statement mean? Protects Your Privacy! The only search engine that does not record your IP address. Every time you use a regular search engine, your search data is recorded. Major search engines capture your IP address and use tracking cookies to make a record of your search terms, the time of your visit, and the links you choose - then they store that information in a giant database. Those searches reveal a shocking amount of personal information about you, such as your interests, family circumstances, political leanings, medical conditions, and more.

Dealing_with_Darwin: Apple, Sony, and the Signal-to-Noise Ratio For innovative offers to create competitive advantage in mature markets, they must clearly and cleanly separate themselves from the crowd. Otherwise customers and consumers are unmotivated to seek out a specific vendor, and commoditization wins out. Engineers call this type of problem managing the signal-to-noise ratio. To optimize that ratio one must simultaneously filter out noise and amplify the signal. When it comes to innovation strategies, most corporations focus on the latter solely and fail to attend to the former. The end result is a marketplace that gets noisier and noisier, drowning out everybody's signals.

Blog « Dataspora Cambridge, Mass. – March 4, 2011 – Via Science announced the acquisition of Dataspora, a predictive analytics firm that helps companies solve complex big data problems. The acquisition helps strengthen Via Science’s positioning to support the consumer packaged goods and retail sectors, areas of focus for Dataspora. REFS™ provides the ability to leverage causal mathematics at scale with its supercomputing platform. if:book Sol Gaitan, a high-school teacher in New York presented this paper at a conference in Cuba — Research Foundations for Understanding Books and Reading in the Digital Age: E/Merging Reading, Writing, and Research Practices If you read only a bit, try the section below in bold (emphasis mine) Thousands of words have already been written about the prevalence of social networks in the life of adolescents, the changing reading habits of a world connected to the Internet, the attention deficit that this “brave new world” is producing, and the impact of all of this on learning.

Don't Take Digital Innovation for Granted In Canada, powerful actors want to make the Net more expensive, less open. Locking in ISP profits at expense of creativity. In my Jan. 2009 column I encouraged readers to make opening the media in Canada their 2010 resolution. I asserted that 2010 would be a pivotal year for communities working to open communication in Canada and beyond. And so here we are in 2011, and it appears that indeed there is a growing community focused on openness, the open Internet at its core. For example, Over 22,000 people and counting have signed the Stop The Meter petition, demonstrating widespread discontent with big telecom companies who are attempting to hogtie competing indie Internet service providers (ISPs) and make the Internet much more expensive to use.

IT Project Management: Avoiding a Project's Most Threatening Ris Have you ever deviated from your regular driving route because excessive traffic or road construction may have put you at risk of being late for an important appointment? In everyday life, people often modify their personal plans or schedules in order to avoid the unwanted consequences of potential risks. In the same way, project managers are often forced to change or modify their project plans in order to eliminate threatening project risks.

3D printing from SketchUp with CADspan: Now even better You might remember reading about a nifty 3D printing-from-SketchUp plugin called CADspan that we blogged about a few months ago. It would appear that the folks over at LGM (who make CADspan) have been busy since then. They've released a new version of the plugin, and here's some of what's new: CADspan is now available for both Windows and Mac It now supports SketchUp 7 (which we released in November) File processing times are about 10x faster The system is much more reliable (hooray for beta testing!)Here's a video that explains more:

What is a data scientist? Everybody loves a data scientist: ever since Google's Hal Varian told the world that the sexy job in the next ten years will be statisticians. People think I'm joking, but who would've guessed that computer engineers would've been the sexy job of the 1990s? That, combined with the McKinsey report into big data last year is a powerful blend. The report reckoned the US alone would need 190,000 deep analytical 'data scientists' - and another 1.5m data-savvy managers to make the big decisions.