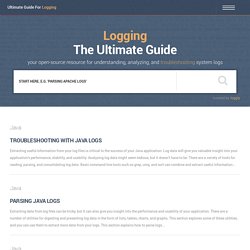 Log data will give you valuable insight into your application’s performance, stability, and usability. A Software Developer's Guide to HTTP Part I - Resources. Free Storage and Email from Google. Microservices without the Servers. Tim Wagner, AWS Lambda General Manager At LinuxCon/ContainerCon 2015 I presented a demo-driven talk titled, “Microservices without the Servers”. 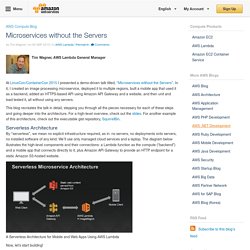 In it, I created an image processing microservice, deployed it to multiple regions, built a mobile app that used it as a backend, added an HTTPS-based API using Amazon API Gateway and a website, and then unit and load tested it, all without using any servers. Stronglink/SUBSTANCE.md at master · btrask/stronglink. LZone. How to Start Contributing to Open Source Software – Aaronontheweb. April 24, 2015. 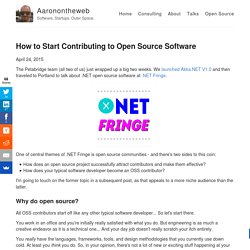 Developers Who Can Build Things from Scratch – Aaronontheweb. August 15, 2015. 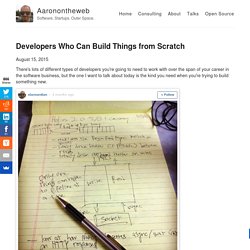 The Taxonomy of Terrible Programmers – Aaronontheweb. December 19, 2013 The MarkedUp Analytics team had some fun over the past couple of weeks sharing horror stories about software atrocities and the real-life inspirations for the things you read on The Daily WTF. 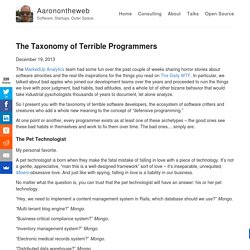 In particular, we talked about bad apples who joined our development teams over the years and proceeded to ruin the things we love with poor judgment, bad habits, bad attitudes, and a whole lot of other bizarre behavior that would take industrial pyschologists thousands of years to document, let alone analyze. So I present you with the taxonomy of terrible software developers, the ecosystem of software critters and creatures who add a whole new meaning to the concept of “defensive programming.” At one point or another, every programmer exists as at least one of these archetypes – the good ones see these bad habits in themselves and work to fix them over time. The bad ones… simply are. Tic Tac Toe: Understanding The Minimax Algorithm. Note! 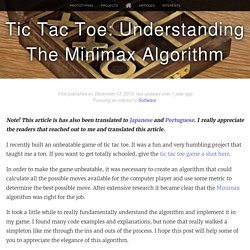 This article is has also been translated to Japanese and Portuguese. I really appreciate the readers that reached out to me and translated this article. I recently built an unbeatable game of tic tac toe. It was a fun and very humbling project that taught me a ton. If you want to get totally schooled, give the tic tac toe game a shot here. CS for All — cs5book 1 documentation. Kazi Manzur Rashid's Blog - ASP.NET MVC Best Practices (Part 2) This is the second part of the series and may be the last, till I find some thing new. 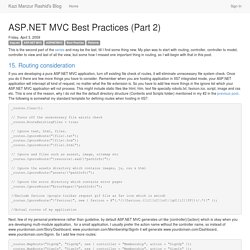 My plan was to start with routing, controller, controller to model, controller to view and last of all the view, but some how I missed one important thing in routing, so I will begin with that in this post. 15. Routing consideration If you are developing a pure ASP.NET MVC application, turn off existing file check of routes, it will eliminate unnecessary file system check. .NET Foundation - WCF Client is Open Source. We’re excited to announce a new open source project on GitHub from the WCF team at Microsoft. 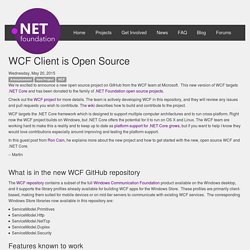 This new version of WCF targets .NET Core and has been donated to the family of .NET Foundation open source projects. Check out the WCF project for more details. The team is actively developing WCF in this repository, and they will review any issues and pull requests you wish to contribute. The wiki describes how to build and contribute to the project. Android's 10 Millisecond Problem: The Android Audio Path Latency Explainer. How Android’s 10 Millisecond Problem and Android Audio Path Latency Impacts App Developers and Android OEMs Even though music apps make up only 3% of all downloads in the iOS App Store, the Music app category is the 3rd highest revenue generating app category after Games and Social Networking. 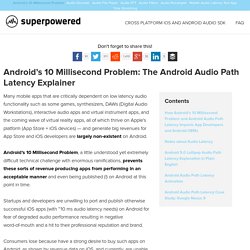 Which suggests that music apps monetize disproportionately well on platforms that offer low latency performance such as the App Store/iOS devices. On Android, it is a different story. In the Google Play store, the Music category is not even a top five revenue producing app category. The overwhelming majority of Android devices suffer from too high audio latency, preventing developers from building apps that would satisfy consumer demand on Android. As such, Google and Android app developers are leaving billions of dollars on the table for Apple and iOS developers because of Android’s 10 Millisecond Problem. Google launches Cloud Dataflow service in beta, adds row permissions in BigQuery. Why do some developers at strong companies like Google consider Agile development to be nonsense? - Agile Overflow.

Why (most) High Level Languages are Slow. In the last month or two I’ve had basically the same conversation half a dozen times, both online and in real life, so I figured I’d just write up a blog post that I can refer to in the future. 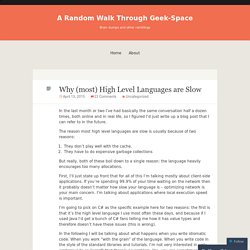 The reason most high level languages are slow is usually because of two reasons: They don’t play well with the cache. They have to do expensive garbage collections But really, both of these boil down to a single reason: the language heavily encourages too many allocations. First, I’ll just state up front that for all of this I’m talking mostly about client-side applications. Developreneurs: Don’t miss the next $1B opportunity. Want to master the CMO role? Join us for GrowthBeat Summit on June 1-2 in Boston, where we'll discuss how to merge creativity with technology to drive growth. Space is limited and we're limiting attendance to CMOs and top marketing execs. Request your personal invitation here! The world’s fast-iterating web and app companies have created more than a cottage industry for startups that help increase the speed of delivery of code from development to operations.

Now, Google will automatically convert eligible Flash campaigns, both existing and new, to HTML5. All the advertiser has to do is upload their ads through AdWords, AdWords Editor, or many third-party tools that work with Google’s ad platform. Serious. Software engineering. Technologies. Web. Javascript. Mvc. Backbone. Steve Sanderson - Architecting large Single Page Applications with Knockout.js. Google Can Now Tell You're Not a Robot With Just One Click. Getty Images. Binding context. Java for Everything. June 1, 2014.