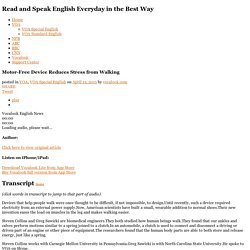 Steven Collins and Greg Sawicki are biomedical engineers.They both studied how human beings walk.They found that our ankles and calves perform motions similar to a spring joined to a clutch.In an automobile, a clutch is used to connect and disconnect a driving or driven part of an engine or other piece of equipment.The researchers found that the human body parts are able to both store and release energy, just like a spring. Steven Collins works with Carnegie Mellon University in Pennsylvania.Greg Sawicki is with North Carolina State University.He spoke to VOA on Skype. Mr. Investigators Use New Tool To Comb Deep Web For Human Traffickers.

Now to deep, dark, uncharted corners of the Internet where investigators are trying to stop human trafficking.It's time for All Tech Considered. 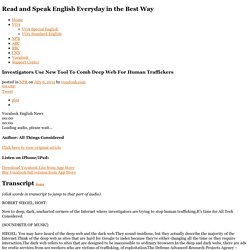 SIEGEL: You may have heard of the deep web and the dark web.They sound insidious, but they actually describe the majority of the Internet.Think of the deep web as sites that are hard for Google to index because they're either changing all the time or they require interaction.The dark web refers to sites that are designed to be inaccessible to ordinary browsers.In the deep and dark webs, there are ads for erotic services from sex workers who are victims of trafficking, of exploitation.The Defense Advanced Research Projects Agency – DARPA – has developed an Internet search tool to help bust human traffickers.

Relative Pronouns. Summary: This handout provides detailed rules and examples for the usage of relative pronouns (that, who, whom, whose, which, where, when, and why). 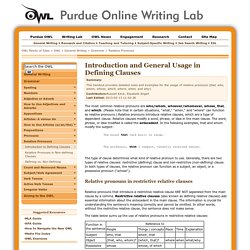 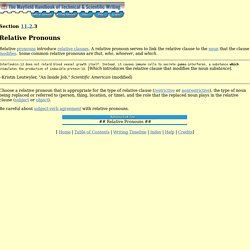 A relative pronoun serves to link the relative clause to the noun that the clause modifies. Who, whom — grmr.me. That's the way to do it. "I have a niggle," says a reader. 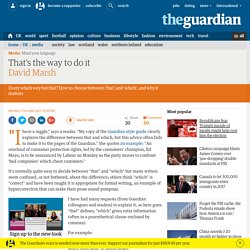 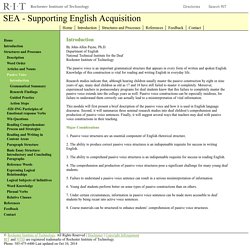 Department of English National Technical Institute for the Deaf Rochester Institute of Technology The passive voice is an important grammatical structure that appears in every form of written and spoken English. Knowledge of this construction is vital for reading and writing English in everyday life. New Device Detects Pilot Blackouts. WASHINGTON— During certain maneuvers, jet fighter pilots sometimes experience loss of vision and even loss of consciousness.Although short, these so-called ‘blackouts’ can have tragic consequences.An Israeli company says it has developed a device that could save pilots’ lives at such moments. 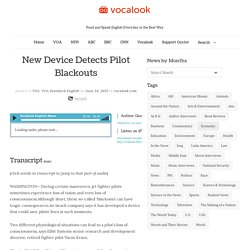 Two different physiological situations can lead to a pilot’s loss of consciousness, says Elbit Systems senior research and development director, retired fighter pilot Yaron Kranz. “One is 'G-LOC' or G Loss of Consciousness, and the other one is hypoxia which is lack of oxygen to the brain,” Kranz said. G-LOC happens during sharp turns and high-speed accelerations, when centrifugal force reduces the normal flow of blood to the pilot’s brain.At that speed, loss of control of the aircraft proved fatal for many pilots. M.esa. Swarm reveals why satellites lose track GPS interruptions 28 October 2016 Satellite engineers have been puzzling over why GPS navigation systems on low-orbiting satellites like ESA’s Swarm sometimes black out when they fly over the equator between Africa and South America. 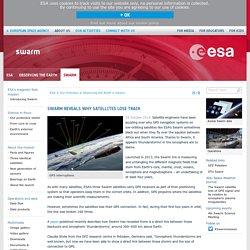 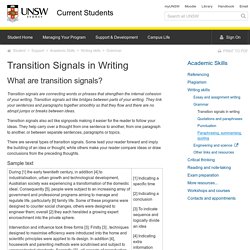 Transition signals act like bridges between parts of your writing. They link your sentences and paragraphs smoothly together smoothly so that they flow and there are no abrupt jumps or breaks between ideas. Transition signals also act like signposts making it easier for the reader to follow your ideas. They help carry over a thought from one sentence to another, from one paragraph to another, or between separate sentences, paragraphs or topics. There are several types of transition signals. Sample text The following words and phrases can be used to indicate transitions and to cue your reader about how ideas are logically connected in your writing.

First, second, third etc. Technical Writing Readability and Style. E-Xplore Technical English - Grammar Review. Conditionals: Verb Tense in "If" Clauses - The Writing Center at UNC-Chapel Hill. 9780472032440 unit4. SEA - Supporting English Acquisition. For the most part, conditions are expressed via the use of one of the following conjunctions: assuming (that) if or else provided (that) providing (that) unless whenever where wherever The sentences below illustrate the use of three of these conjunctions. 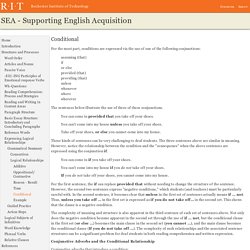 You can come in provided that you take off your shoes. You can't come into my house unless you take off your shoes. Conditionals (zero,1st,2nd,3rd,mixed) / If clauses. BBC Learning English - Course: Upper-intermediate / Unit 1 / Session 1 / Activity 1. Irregular verbs. Anna Mracek Dietrich: A plane you can drive. One-Person Flying Vehicles Close to Reality. Smart phones, essentially pocket-sized computers, we already have.Flying drones with cameras are available to everybody.Robots and self-driving cars are just around the corner.Now, two groups of inventors say very soon we will be able to try flying platforms and flying bikes. Being able to fly around as simply as riding a bicycle has been a long-standing dream of many inventors.But the safety and stability of such vehicles was always a huge problem.

Using the LaTeX Resume Templates. G3: Verbs II - Present Perfect: for /since. Falkirk Wheel, Central Scotland. BBC Learning English - Course: lower intermediate / Unit 16 / Grammar Reference. How the braking system works. Modals - The Writing Center at UNC-Chapel Hill. Modals of Possibility and Probability with Continuous Tenses. Modals new. Tips for Writing in North American Colleges. Summary: This handout is an introduction to the basics of academic writing conventions for students who are new to American colleges and universities. ERIC - The Author in the Text: Hedging Scientific Writing., Hong Kong Papers in Linguistics and Language Teaching, 1995-Sep. A comparison of the use of modal verbs in research articles by pr. Elon Musk: The future we're building.