L'affaire Apple contre FBI est close. Résumé en quelques dates. #AFP. Untitled. This Map Shows How the Apple-FBI Fight Was About Much More Than One Phone. John McAfee Reveals, On TV, How He Can Hack An iPhone Or Any Computer In 30 Minutes - fossBytes. John McAfee — a cybersecurity pioneer, the maker of McAfee antivirus, a U.S. presidential candidate, and a lot more — has claimed that unlocking the iPhone involved in the San Bernardino shooting is a ‘trivial’ exercise and it should just take the FBI 30 minutes. 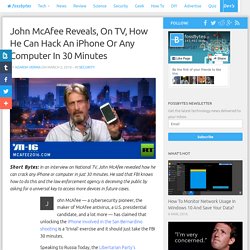 Apple’s battle with the FBI: All your questions answered. My news feed is filled with people talking about Apple, the FBI, the DOJ and iPhone unlocking. 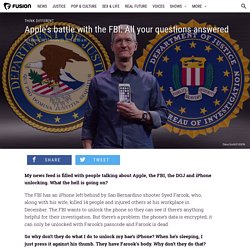 What the hell is going on? The FBI has an iPhone left behind by San Bernardino shooter Syed Farook, who, along with his wife, killed 14 people and injured others at his workplace in December. The FBI wants to unlock the phone so they can see if there’s anything helpful for their investigation. But there’s a problem: the phone’s data is encrypted; it can only be unlocked with Farook’s passcode and Farook is dead. So why don’t they do what I do to unlock my bae’s iPhone? Whoa, you’re a creep. Well. Apple v FBI: engineers would be ashamed to break their own encryption. Apple’s security team are a tight-knit tribe of hackers driven by a strict belief system and with almost unparalleled power around the company’s Cupertino campus, according to a former employee who worked closely with them. 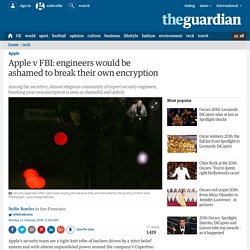 “They’ll come into your office and just sit down with you and argue until they win, but they will always win,” said the engineer, who worked in a different department at Apple and who spoke on condition of anonymity. “They dressed the same as us, they’re just as fun to talk to, but they’re fierce. They know how much responsibility they have and how vulnerable it could be.” Software engineers, especially those who work the deep foundational security code, like to see themselves as being driven by craft and art more than money. Engineers have a strong, almost religious belief system around their work. “It’s like asking Superman to engineer his own kryptonite,” said David Noor, a therapist and software engineer who counsels technologists.

No, Apple Has Not Unlocked 70 iPhones For Law Enforcement. The more highly technical the basis of a story, the more likely it is that some key detail will get jacked up by a journalist trying to translate it for the public. 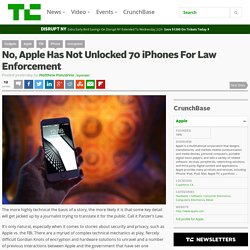 Call it Panzer’s Law. It’s only natural, especially when it comes to stories about security and privacy, such as Apple vs. the FBI. There are a myriad of complex technical mechanics at play, fiercely difficult Gordian Knots of encryption and hardware solutions to unravel and a number of previous interactions between Apple and the government that have set one precedent or another. But no matter how hard it is, it’s important to get this stuff right. San Bernardino Shooter's iCloud Password Reset With FBI Consent, Agency Says. 4 reasons why everyone should care about Apple’s fight with the FBI. When Apple announced that they would oppose the FBI’s order to break into the iPhone used by one of the San Bernardino attackers, a firestorm of commentary was launched, with incredibly vocal advocates on both sides of the issue. 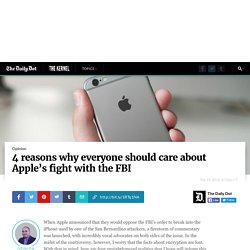 In the midst of the controversy, however, I worry that the facts about encryption are lost. With that in mind, here are four straightforward realities that I hope will inform this debate: Weakening encryption is a security risk And that’s not just my opinion. The current head of the CIA (and former director of the National Security Agency) Michael Hayden agrees. Harvard recently published a report showing that metadata continues to be unencrypted, and in fact is often the most important form of data since it is the most easily analyzed. Weakening encryption undermines a strength of America—our respect for individual rights Privacy and free expression are core American ideals. Weakening encryption will impede trade Photo via Kārlis Dambrāns/Flickr (CC BY 2.0) Customer Letter - FAQ - Apple. iOS Security Guide. How to Unlock iPhone with Forgotten Passcode @ EveryiPhone.com. How can I unlock my iPhone if I forgot the passcode? 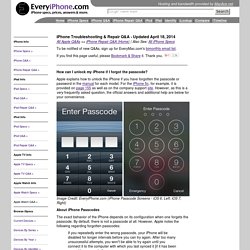 Apple explains how to unlock the iPhone if you have forgotten the passcode or password in the manual for each model. For the iPhone 5c, for example, it is provided on page 155 as well as on the company support site. However, as this is a very frequently asked question, the official answers and additional help are below for your convenience. 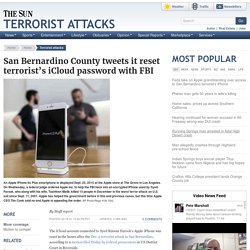 The account was reset by a San Bernardino County employee in an effort to gain access to iCloud information connected to Farook, according to the filing. Apple can comply with the FBI court order – Trail of Bits Blog. On the San Bernardino Suspect's Apple ID Password Reset. Sunday, 21 February 2016 The latest news in the Apple-FBI legal fight has resulted in much confusion. 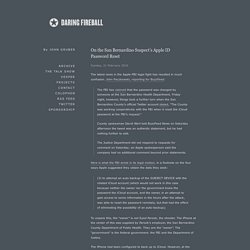 John Paczkowski, reporting for BuzzFeed: The FBI has claimed that the password was changed by someone at the San Bernardino Health Department. Friday night, however, things took a further turn when the San Bernardino County’s official Twitter account stated, “The County was working cooperatively with the FBI when it reset the iCloud password at the FBI’s request.” County spokesman David Wert told BuzzFeed News on Saturday afternoon the tweet was an authentic statement, but he had nothing further to add. Tl;dr Apple’s technical capabilities under FBI AWA order. Apple was recently ordered by a magistrate court to assist the FBI in brute forcing the PIN of a device used by the San Bernardino terrorists.The court ordered Apple to provide custom firmware for the device that would disable a number of security features to make brute forcing possiblePart of the court order also instructed Apple to essentially design a system by which pins could be sent electronically to the device, allowing for rapid brute forcing while still giving Apple plausible deniability that they hacked a customer device in a literal sense.All of this amounts to the courts compelling Apple to design and develop a backdoor into iOS devices. 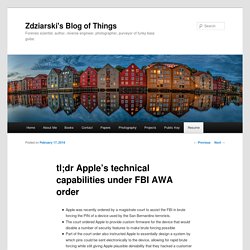