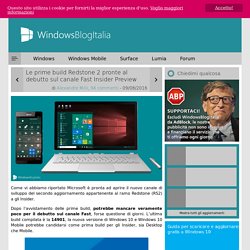 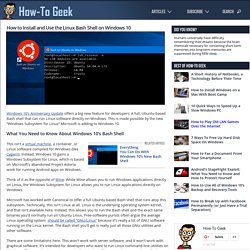 This is made possible by the new “Windows Subsystem for Linux” Microsoft is adding to Windows 10. What You Need to Know About Windows 10’s Bash Shell. ELI5: What is Microsoft's reasoning for forced updates in Windows 10 instead of letting us choose what and when to install? : Windows10. Windows 10 (build 14376) rolls out with nearly 1,800 fixes, removes Messaging everywhere. As we get closer to the Anniversary Update of Windows 10, we continue to see new test previews rolling to Insiders. 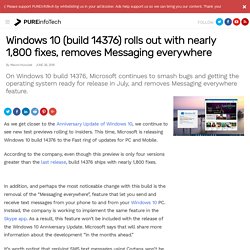 This time, Microsoft is releasing Windows 10 build 14376 to the Fast ring of updates for PC and Mobile. According to the company, even though this preview is only four versions greater than the last release, build 14376 ships with nearly 1,800 fixes. In addition, and perhaps the most noticeable change with this build is the removal of the “Messaging everywhere”, feature that let you send and receive text messages from your phone to and from your Windows 10 PC. Instead, the company is working to implement the same feature in the Skype app. As a result, this feature won’t be included with the release of the Windows 10 Anniversary Update. Windows 10 (build 14379) drops with new fixes and improvements. Microsoft has begun rolling out Windows 10 build 14379 to the Fast ring with several fixes and improvements. 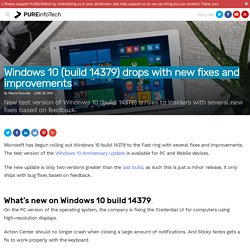 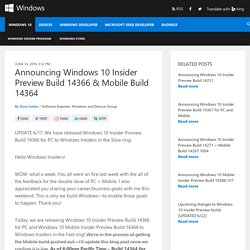 Hello Windows Insiders! WOW, what a week. You all were on fire last week with the all of the feedback for the double dose of PC + Mobile. I also appreciated you sharing your career/business goals with me this weekend. Windows 10 Anniversary SDK Preview Build 14366 Released. Namespace Windows.ApplicationModel.Core { public static class CoreApplication { public static void EnablePrelaunch(bool value); namespace Windows.Gaming.Input.ForceFeedback { 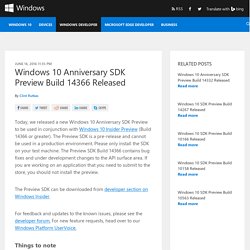 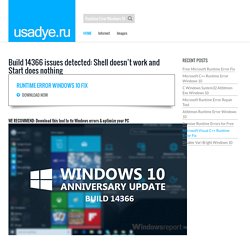 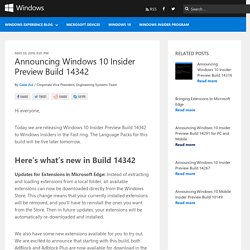 The Language Packs for this build will be live later tomorrow. Updates for Extensions in Microsoft Edge: Instead of extracting and loading extensions from a local folder, all available extensions can now be downloaded directly from the Windows Store. Announcing Windows 10 Insider Preview Build 14316. Hi everyone, Today we are releasing Windows 10 Insider Preview Build 14316 to Windows Insiders in the Fast ring. 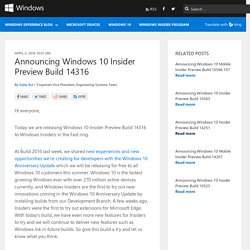 At Build 2016 last week, we shared new experiences and new opportunities we’re creating for developers with the Windows 10 Anniversary Update which we will be releasing for free to all Windows 10 customers this summer. Windows 10 is the fastest growing Windows ever with over 270 million active devices currently, and Windows Insiders are the first to try out new innovations coming in the Windows 10 Anniversary Update by installing builds from our Development Branch. A few weeks ago, Insiders were the first to try out extensions for Microsoft Edge. With today’s build, we have even more new features for Insiders to try and we will continue to deliver new features such as Windows Ink in future builds. Windows 10 SDK Preview Build 14267 Released. 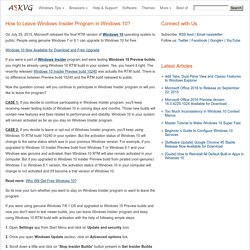 People using genuine Windows 7 or 8.1 can upgrade to Windows 10 for free. Windows 10 Now Available for Download and Free Upgrade If you were a part of Windows Insider program and were testing Windows 10 Preview builds, you might be already using Windows 10 RTM build in your system. Yes, you heard it right. The recently released Windows 10 Insider Preview build 10240 was actually the RTM build. Now the question comes: will you continue to participate in Windows Insider program or will you like to leave the program? New Services. ATTENTION INFO. Windows 10 IT PRO. Windows Shortcuts 101 - The Ultimate Keyboard Shortcut Guide. Advertisement People love taking shortcuts in all aspects of life; computers are no exception. Shortcuts, particularly ones performed by keyboard, can save you hours of time once applied properly. We’ve rounded up some of the most common keyboard shortcuts in the past, but today we’re here to produce the ultimate guide on Windows shortcuts.

After examining how useful shortcuts can be, we’ll first look at universal shortcuts that perform the same function in pretty much every program you could use. We’ll dive into specific programs after that, and finish up with a selection of alternative tricks. Download this entire article as a PDF. Why Bother with Shortcuts? If you’re not accustomed to using them, keyboard shortcuts might seem like a waste of time. Consider this: you probably only have one hand on your mouse (if you use a two-handed mouse, I’d love to see pictures). Now, you don’t have to get carried away. Windows 10 content from SuperSite for Windows. Just a quick-hit tip here. Those that are familiar with gaming know that there's almost always a tweak available to find that will enable god-like powers in games.

These tweaks give you things like unlimited lives, indestructibility, and infinite powers. In reality, it's a cheat. But, who hasn't enjoyed it and used it to learn how to beat the toughest levels of gameplay? Clues & Hints. How to share feedback on Windows 10 Technical Preview? Help shape the future of Windows! We’re anxious to hear your ideas and opinions, and here’s how you or your friends can best have an impact on making Windows better! Members of the Windows Insider Program can provide feedback about the Tech Preview directly to our engineers by using the Windows Feedback app. Simply search for “Windows Feedback” from the search box, and tell us your Windows 10 likes, dislikes, or any bugs you may have found. If you have any questions about the Windows Feedback app itself, please post your comments to the Community using the Windows Feedback app sub-topic.

If you have a question or are seeking support for the Tech Preview, you’ve already come to the right place! Windows 10 Package Archive. Windows 10 TP expires in October, not April! - Windows Central Forums. (Solved) Beta store doesn't install anything - Windows Central Forums. Found the solution for me. It ended up being the "Format" field under the "Regional" settings.Doesn't matter that my primary language, display language, and even over-ride system language are all English, the Beta Store looks at the "Format" field. This one: If it's not set to "English (United States)" the beta store will not function correctly! Once I changed that to "English (United States)", closed and reopened the store - everything started working smoothly.

Changed it back to "Hebrew" as it was before - store stopped working - install button became unresponsive.I found this via the windows event viewer, where I found this error: So I realized it had to be picking up the "He-IL" string from somewhere, and the only place I had it set was the "Format" field above (which usually doesn't affect apps)Not sure about other regional settings (As I have them all set on English (United States) already) but you might wanna look into those settings if you're still having issues. Share broadband connection. Implementation of ports 139 and 445 and networking with old Windows platforms. Below with the help from Adam (who provided the analysis) are the traces I ran. Someone in another forum reported that they too have no file sharing issues in My Network Places when accessing Win10. Can't understand why there is a difference.

VmWare Workstation 11 on Windows 10 Pro TP build 9926 - no networking. [Mockup] Windows 10 Project (Please vote on UserVoice!) - Windows Central Forums. Hey guys thank you so much for the support! You are AWESOME! Here's an updated mockup of Tabs in File Explorer, check it out! Also, I know that I wrote about removing the Ribbon, but what do you guys think about placing it at the bottom? :D. Technet forums. P. 1 of 2, Windows 10 Start Menu Broken Build 9926 - Windows Central Forums.

P. 2 of 2, Windows 10 Start Menu Broken Build 9926 - Windows Central Forums. Follow. Windows 10 cannot open Start Menu, Action Center, Metro App. I know this problem has been asked a few times, but I have to ask again because I know Microsoft won't respond twice on a question. I had this problem 2 times and I reinstalled Windows 10 Technical Preview 2 times, it is frustrating. Both times had not displayed any error messages unless I run one the the apps using the "Run".

Also, it is ironic if you have to update to get rid of the problem while Windows Update had moved to a metro app. Known Issues in Windows 10 Technical Preview 2. It will come as no surprise that pre-release software isn’t complete, reliable or even usable. Search doesn't work when taskbar is moved to any other location. Instant search doesn't work after pressing Start/Win key. Hi Donatas, In Search of the Perfect Windows 10 Hardware.

Avoid Hidden Fees Whitepaper FedEx, UPS & the USPS: Finding the Shipping Mix that Works for You.Receive a detailed breakdown of the types of fees and surcharges associated with each carrier and arm yourself with the information you need to ship smart and save money. Download Now! I'm well into the user testing of the next generation of Microsoft's operating system and things are really looking up. Microsoft Releases Windows 10 Technical Preview 2: Get It Now! Good news, Windows fans: the wait is over. Attenzione. Windows 8–Metered Connections. One of the new features in Windows 8 is that we can configure WLAN and WWAN cost settings. In the Windows UI this is called a metered connection. Why are these settings important? Well, when a Network is configured to be a Metered Connection, Windows will make several changes to the way that it uses the network to reduce overall network traffic through that connection, including the following:

Screenshot (2) Screenshot (3) Attenzione. Why can't I change network adapter settings? - Windows Central Forums. Network Connections Config Issue in Windows 10 Tech Preview 10041 Build. UPDATE: Blog comments are awesome. Just to stop you from having to look any further, Darren Shetler explains in the comment section (and I’ve confirmed) that the way to fix this is to: Go into Device ManagerDelete the network devices – do NOT uninstall their drivers when asked!!! Run “Scan For Hardware Changes” to add the network devices back to Windows Afterwards, everything worked with an admin account, a regular account (prompts for admin credentials) and still worked after a reboot. If you want to be careful, do this to only one network interface, and confirm that it’s back working before you do the rest; that is, don’t get rid of your otherwise-functional WiFi and wired connections at the same time.