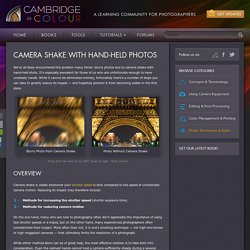 It's especially prevalent for those of us who are unfortunate enough to have unsteady hands. While it cannot be eliminated entirely, fortunately there's a number of steps you can take to greatly reduce its impact — and hopefully prevent it from becoming visible in the first place. Blurry Photo from Camera Shake Photo Without Camera Shake Photo from the base of the Eiffel Tower at night - Paris, France.

Camera shake is visible whenever your shutter speed is slow compared to the speed of unintended camera motion. Methods for increasing the shutter speed (shorter exposure time)Methods for reducing camera motion On the one hand, many who are new to photography often don't appreciate the importance of using fast shutter speeds or a tripod, but on the other hand, many experienced photographers often overestimate their impact. Choose optimal exposure settings. First Photo(most blurred) 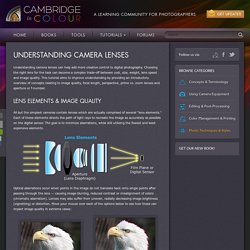 Choosing the right lens for the task can become a complex trade-off between cost, size, weight, lens speed and image quality. This tutorial aims to improve understanding by providing an introductory overview of concepts relating to image quality, focal length, perspective, prime vs. zoom lenses and aperture or f-number. All but the simplest cameras contain lenses which are actually comprised of several "lens elements. " Each of these elements directs the path of light rays to recreate the image as accurately as possible on the digital sensor. The goal is to minimize aberrations, while still utilizing the fewest and least expensive elements. Optical aberrations occur when points in the image do not translate back onto single points after passing through the lens — causing image blurring, reduced contrast or misalignment of colors (chromatic aberration). Original Image ZOOM LENSES vs.

Bokeh. Digital Printing. Depth of Field. Film Formats. Texture. Mastering Dodging and Burning with 4 Techniques (Photoshop Tutorial) Motion. Lighting. How to use a polarizing filter. This article on how to use Nikon's AF-ON button for AF is written by Steve Perry (website | YouTube | Facebook). 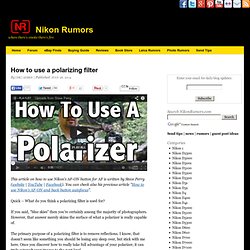 You can check also his previous article "How to use Nikon’s AF-ON and back button autofocus". Quick – What do you think a polarizing filter is used for? If you said, “blue skies” then you’re certainly among the majority of photographers. However, that answer merely skims the surface of what a polarizer is really capable of. The primary purpose of a polarizing filter is to remove reflections. Here’s the thing. In short, you really need to know how to use this tool! In the embedded video above, we’ll look at why you need one, when to use it, and how to use it under a variety of scenarios. Wagner Falls (38mm, FX) For this image, a polarizer was essential for showing detail under the water. As a bonus, the polarizer also removed the reflections from the wet leaves and really made the colors pop. 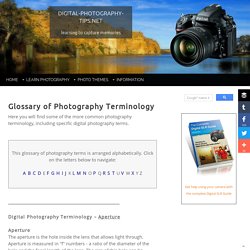 Digital Photography Terminology – Aperture Aperture The aperture is the hole inside the lens that allows light through. Aperture is measured in "f" numbers - a ratio of the diameter of the hole and the focal length of the lens. The size of this hole can be adjusted – a larger hole allows more light in, a smaller hole less. 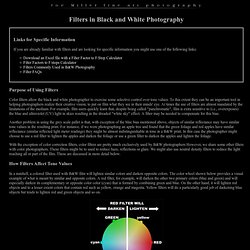 To this extent they can be an important tool in helping photographers realize their creative vision; to put on film what they see in their minds' eye. At times the use of filters are almost mandated by the limitations of the medium. For example, film users quickly learn that, despite being called "panchromatic", film is extra sensitive to (i.e., overexposes) the blue and ultraviolet (UV) light in skies resulting in the dreaded "white sky" effect. A filter may be needed to compensate for this bias. Another problem in using the grey scale pallet is that, with exception of the blue bias mentioned above, objects of similar reflectance may have similar tone values in the resulting print. With the exception of color correction filters, color filters are pretty much exclusively used by B&W photographers However, we share some other filters with color photographers.