The Daily Meal's 101 Best Restaurants in America for 2013 Slideshow. America's Secret Bars and Hidden Modern Speakeasies. The necessity of a speakeasy is gone. 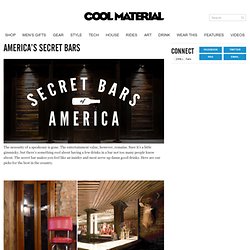 The entertainment value, however, remains. Sure it’s a little gimmicky, but there’s something cool about having a few drinks in a bar not too many people know about. The secret bar makes you feel like an insider and most serve up damn good drinks. 'World's 50 Best' Restaurants 2013: El Celler De Can Roca Named Top Spot. El Celler De Can Roca restaurant in Girona, Spain has been named the best restaurant in the world by Restaurant magazine. 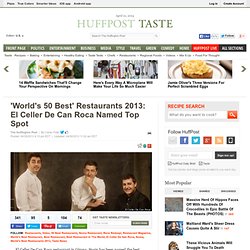 Each year, the world's top toques gather to hear the announcement of the World's 50 Best list. This is the first year the restaurant has held this title, though it has been on the list for eight years and hold three Michelin stars. The restaurant is helmed by three brothers -- Josep, Jordi and Joan Roca. They have also been hard at work on a massive book. While El Celler De Can Roca has been a top contender for several years, Noma held the honors for the past three years.

Only one restaurant in the U.S. made the top 10 -- Eleven Madison Park in New York City came in at number five. The Passenger, Madrid, Spain. On first glance, The Passenger restaurant, recently opened in the trendy Malasaña neighborhood’s Triball area in Madrid, Spain, appears like any retro dining establishment with heavy-handed use of leather, brass and dark wood. 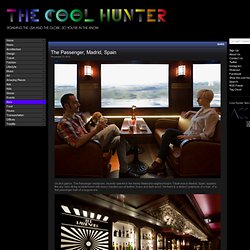 Restaurant Muramoto 608 259 1040. Takumi 53704 - Madison. The Arts Theatre Club. Alfred Takes Guesswork Out of Finding Restaurant to Go. How many times do you have plans to go out to dinner or lunch, but can’t decide where to go? 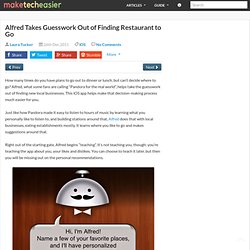 Alfred, what some fans are calling “Pandora for the real world”, helps take the guesswork out of finding new local businesses. This iOS app helps make that decision-making process much easier for you. Just like how Pandora made it easy to listen to hours of music by learning what you personally like to listen to, and building stations around that, Alfred does that with local businesses, eating establishments mostly. It learns where you like to go and makes suggestions around that. Right out of the starting gate, Alfred begins “teaching”. Alfred begins “teaching” itself about your habits by asking you questions. Saving Money News, Videos, Reviews and Gossip - Lifehacker. Yep, the co-op by me (Lakewinds in Minnesota) I wouldn't exactly use the word cheap to describe anything let alone super cheap. 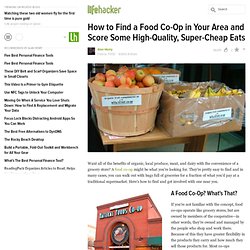 I do know that they have a membership and here are the details - To become a member-owner, all it takes is a one-time membership purchase of $90. Apply for your membership at the customer service desk or cash register, and immediately receive member benefits. Member Benefits: - 5% once-per-month discount. - Ongoing member-only specials and coupons. - Reusable shopping bag at time of membership purchase. Maldives Restaurants and Lounges - Conrad Maldives Rangali Island. Savour fine contemporary European cuisine 16 feet below sea level at Ithaa Undersea Restaurant, the world's first all-glass undersea restaurant, a truly unique and unforgettable experience. 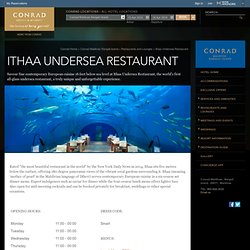 Rated "the most beautiful restaurant in the world" by the New York Daily News in 2014, Ithaa sits five metres below the surface, offering 180-degree panoramic views of the vibrant coral gardens surrounding it. Ithaa (meaning 'mother of pearl' in the Maldivian language of Dihevi) serves contemporary European cuisine in a six-course set dinner menu. Expect indulgences such as caviar for dinner while the four-course lunch menu offers lighter fare. Amsterdam – cruise – london – sanfrancisco – istanbul – losangeles – onlocation – music – club – restaurant. Underwater Restaurant List: 6 of The Most Awesome. Eating food at an underwater restaurant beats shoving Burger King in my mouth above land any day. And I’m not saying that the food is better underwater, I’m just saying that the only thing I would ever eat from Burger King is their new bacon sundae. (Haven’t heard about that?) This underwater restaurant list gives you six of the most awesome establishments under the sea.

Actually, it gives you the only underwater restaurants under the sea. Top 10 London Pubs & Bars. London is home to over 8 million people and being British they are born with a beer glass in hand and an incredible thirst. 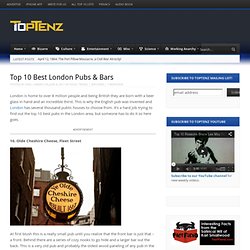 This is why the English pub was invented and London has several thousand public houses to choose from. It’s a hard job trying to find out the top 10 best pubs in the London area, but someone has to do it so here goes. 10. Olde Cheshire Cheese, Fleet Street.

The Ten Best New Restaurants in America: Restaurants + Bars. The name itself is reason to be wary, combining as it does two movements as ubiquitous and smothering as melted cheese on enchiladas: craft beer and pork fetishism. 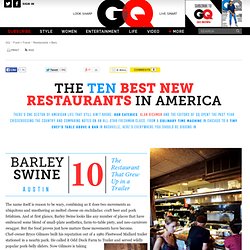 And at first glance, Barley Swine looks like any number of places that have embraced some blend of small-plate aesthetics, farm-to-table piety, and neo-carnivore swagger. Concrete Blonde - Sydney. It seems we really like the work of Sydney's Dreamtime Australia Design as this is the third time we featured their work. 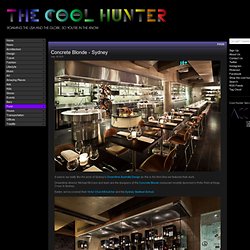 Dreamtime director Michael McCann and team are the designers of the Concrete Blonde restaurant recently launched in Potts Point at Kings Cross in Sydney. Earlier, we've covered their Victor Churchill butcher and the Sydney Seafood School. Concrete Blonde is a 100-seat restaurant presided over by chef Patrick Dang who has brought the many nuances of his international experience to the stylish tables of Concrete Blonde. The Spare Room - Hollywood. Bowling alleys are right up there with curling rinks on the list of the most unlikely milieus for anything chic. 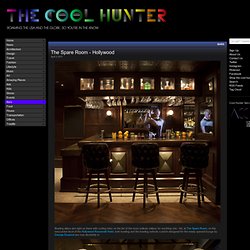 Yet, at The Spare Room, on the mezzanine level of the Hollywood Roosevelt Hotel, both bowling and the bowling oxfords custom-designed for the newly opened lounge by George Esquivel are now decidedly in. Celebrities and notables are seen nightly at the venue, created by nightlife wizards Med Abrous and Marc Rose and cocktail king Aidan Demarest. Please Don't Tell. Illegal Burger - Oslo, Norway. Illegal Burger, at Møller Gata 23 in Olso, capital of Norway, opened in secrecy late last year but it has since become a hit among those who appreciate a delicious charcoal-grilled burger. Located in a space that used to house a “knock-three-times” club, the fresh-looking burger place still carries some of that mystery, hence the name, too.

Illegal Burger does not quite fit in any standard restaurant or club category and it does not look like a burger joint. Low-ceilinged and only 43 square meters in size, the heavily wood-paneled space looks a bit like a below deck of a ship, with the tight kitchen resembling a galley. Flexibility was one of the key points in the design brief because the space functions as a party space, hosting intimate events with DJs and late night parties.

Spirito – Martini: From Church To Nightclub. Twenty Five Lusk: San Francisco. Twenty Five Lusk: San Francisco Email 53 Email Restaurateurs Chad Bourdon and Matthew Dolan have opened a multi-level restaurant and lounge in San Francisco’s SOMA district. Twenty Five Lusk serves up New American cuisine in a rehabbed meat packing warehouse originally constructed in 1917. Alice of Magic World – Tokyo. Whimsical places exist all over the world. And We Heart is just the place to discover some of them. Check out this awesome new Tokyo restaurant designed by Fantastic Design Works Co. NINJA NEW YORK Restaurant, Finest Japanese Cuisine. Underground Kitchen and Catering in Madison WI. The Rise of the Social Food Truck [INFOGRAPHIC] If the average person was told five years ago that she could nab a delicious and buttery lobster roll from a truck without getting food poisoning, she may have scoffed.

The 10 Weirdest Food Pairings You Just Have to Try. This year, your resolution to try new things can also include food. Cook Taste Eat : Home. New Trader Joe's Cookbook. S Good Food on a Tight Budget. Stretching your dollars to get a month's worth of healthy, filling food is a challenge. EWG assessed nearly 1,200 foods and hand-picked the best 100 or so that pack in nutrients at a good price, with the fewest pesticides, contaminants and artificial ingredients. Enjoy! See top foods EWG's "Good Food on a Tight Budget" booklet comes with our top tips for healthy eating, quick lists of best foods, tasty recipes and easy tools for tracking food prices and planning your weekly menu (a key step to cutting costs!). We hope it helps you find delicious, healthy food -- and save money, too. Homemade jalapeno poppers with cheeseburger filling.