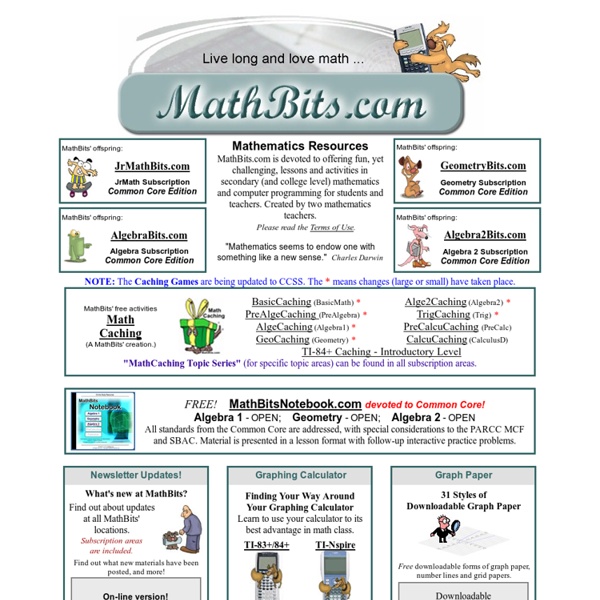 New MathBitsNotebook.com Algebra 1 (CCSS) section OPEN (partially) The Algebra 1 section is partially open. Please understand that the unlinked topic areas are still under development. Links followed by the letter "P" are currently password protected as they are getting ready to open once the final touches have been made and the proof reading is accomplished. When completed, the site will include all standards from the CCSS, with special considerations to the PARCC MCF and SBAC.

MathNEXUS: Mathematics Portal For the past 29 years, I have taught a mathematics history course, and was even the creator of the course at my university. During this time, I have learned not only a great amount of the history of mathematics, but also have gained experience on how to integrate math history ideas into my normal teaching of mathematics. In an attempt to share some of this gained knowledge and experiences, I now announce the release of a new website Teaching Mathematics History. AIMS Puzzle Corner: Free Math Puzzles This week’s Puzzle Corner activity is a magic trick with a mathematical, as well as a slight-of-hand, component. I first came across this trick in one of Martin Gardner’s many books on recreational mathematics. I liked it so much that I have been stumping students, friends, and family members with it ever since.

Free Trigonometry Tutorials and Problems Free tutorials and problems on solving trigonometric equations, trigonometric identities and formulas can also be found. Java applets are used to explore, interactively, important topics in trigonometry such as graphs of the 6 trigonometric functions, inverse trigonometric functions, unit circle, angle and sine law. Interactive Trigonometry Tutorials (Applets) Information for Teachers Maths Buddy is New Zealand's leading computer-based training program, designed to complement what you teach your kids in class. It helps guide your students lesson by lesson, allowing them to pause, rewind and repeat all or part of any lesson until they fully understand it. The program has tremendous potential as a support to your in-class instruction by providing the following; Video/Audio lesson demonstrations of an enormous amount of concepts, with several examples of each.

Fun Maths printable worksheets > geometry worksheets & problems Below are a number of worksheets covering Euclidian Geometry problems. Geometry is the study of shape, size, position and space. It is after the Greek mathematician Euclid who around 300BC made a list of objects and assumptions (called axioms) from which all results follow. High school math students can use these geometry problems for study purposes.

CME Project About the Program. The CME Project, developed by EDC’s Center for Mathematics Education and published by Pearson, is a coherent, four-year, NSF-funded high school mathematics program designed around how knowledge is organized and generated within mathematics: the themes of algebra, geometry, and analysis. The CME Project sees these branches of mathematics not only as compartments for certain kinds of results, but also as descriptors for methods and approaches—the habits of mind that determine how knowledge is organized and generated within mathematics itself. As such, they deserve to be centerpieces of a curriculum, not its by-products. The Program’s Structure.

Graphs of Functions and Algebra - Interactive Tutorials Free tutorials using java applets to explore, interactively, important topics in precalculus such as quadratic, rational, exponential, logarithmic, trigonometric, polynomial, absolute value functions and their graphs. Equations of lines, circles, ellipses, hyperbolas and parabolas are also explored interactively. Graph shifting, scaling and reflection are also included. The definition and properties of inverse functions are thoroughly investigated. A graphical approach to 2 by 2 systems of equations is included. Smart Tools for Your Android Device Smart Tools Co. is a developer of handy Android apps for measuring things. Some of the free apps that they offer include Smart Measure, Sound Meter, Vibration Meter, Speed Â Gun, and Smart Protractor. Smart Tools also offers pro versions of those apps. I’m not a mathematics teacher and admittedly my geometry skills are rusty, but when I watched the videos of Smart Measure and Smart Protractor in action (videos below) I couldn’t help but think that there has to be a math lesson lying in wait with these apps.

Illuminations Coin Box Pre-K-2, 3-5 Learn how to count, collect, exchange, and make change for coins by manipulating coins using an array representation. Deep Sea Duel This strategy game requires you to select cards with a specified sum before your opponent (also available on iOS and Android). Coping With Math Anxiety What Is Math Anxiety? A famous stage actress was once asked if she had ever suffered from stage-fright, and if so how she had gotten over it. She laughed at the interviewer’s naive assumption that, since she was an accomplished actress now, she must not feel that kind of anxiety. She assured him that she had always had stage fright, and that she had never gotten over it. Instead, she had learned to walk on stage and perform—in spite of it. Like stage fright, math anxiety can be a disabling condition, causing humiliation, resentment, and even panic.

Wonders of Math - The Game of Life What is the Game of Life? by Paul Callahan Rules of the Game of Life Life is played on a grid of square cells--like a chess board but extending infinitely in every direction. A cell can be live or dead. A live cell is shown by putting a marker on its square. A dead cell is shown by leaving the square empty. Maths Maps I am excited to introduce you to my new project idea that I hope will result in some engaging content for our classes. It is collaborative in the same way the Interesting Ways resources are and I will need your help to make it a success. Elevator Pitch Using Google Maps.Maths activities in different places around the world.One location, one maths topic, one map.Activities explained in placemarks in Google Maps.Placemarks geotagged to the maths it refers to. “How wide is this swimming pool?”

Introduction to Geometry More than 2000 years ago, long before rockets were launched into orbit or explorers sailed around the globe, a Greek mathematician measured the size of the Earth using nothing more than a few facts about lines, angles, and circles. This course will start at the very beginnings of geometry, answering questions like "How big is an angle?" and "What are parallel lines?" and proceed up through advanced theorems and proofs about 2D and 3D shapes. Along the way, you'll learn a few different ways to find the area of a triangle, you'll discover a shortcut for counting the number of stones in the Great Pyramid of Giza, and you'll even come up with your own estimate for the size of the Earth.