Students should be first. Don’t always start planning with a standard. Questions matter more than answers. So I thought I’d gather twelve of them to start with. 1. This is how great things are built. 2. Learning models, for example, are the new teaching strategy. Traditionally, teachers focus on “strategies” to “teach.” But the modern approach should have as much to do with what students access, when, how, and why as it does with “what students do in the lesson.” Born to Learn ~ Home. Get ready for your new class. Welcome. 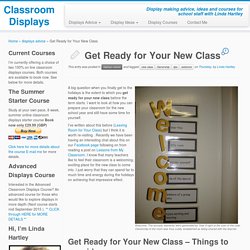 The acrostic elements were generated by Year 6 right at the start of the year. Ownership of the room was thus subtly established as being shared with the teacher. A big question when you finally get to the holidays is the extent to which you get ready for your new class before the term starts. I want to look at how you can prepare your classroom for the new school year and still have some time for yourself. I’ve written about this before (Leaving Room for Your Class) but I think it is worth re-visiting . Teacher Time During the holidays you do not have your TA to help you get ready for your new class with the displays so everything is down to them. In the UK this is less prevalent than it is in the US. Schools have holidays not just for the children.You do need to spend part of your ‘time off’ preparing for next term but I seriously question if you should be spending a large part of it on displays.

Ownership I want to consider the idea of ownership of the classroom. Like this: Vocabulary. Anatomy of A Tweet- Must See Guide for Teachers. Using Twitter for educational purposes starts with understanding how this social networking and microblogging platform works. 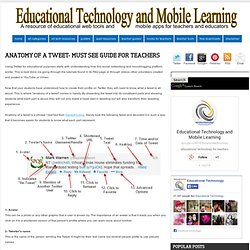 This is best done via going through the tutorials found in its FAQ page or through videos other volunteers created and posted in YouTube or Vimeo. Now that your students have understood how to create their profile on Twitter, they will need to know what a tweet is all about. This is where "anatomy of a tweet" comes in handy. By dissecting the tweet into its constituent parts and showing students what each part is about, they will not only make a head start in tweeting but will also transform their tweeting experience.

Anatomy of a tweet is a phrase I learned from SandyK's blog. 1- Avatar This can be a photo or any other graphic that a user is known by. 2- Tweeter's name This is the name of the person sending the Tweet. 3- Twitter username or handle This is a name by which a tweeter is known in the twitter community. Classroom Management - Classroom Quotes. Luca Parmitano sta per tornare sulla Terra...e le scrive una lettera d'amore. Si avvia alla conclusione la missione di quasi sei mesi nello spazio dell'astronauta italiano dell'Esa Luca Parmitano. 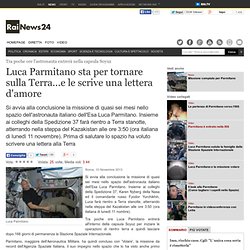 There comes a moment in most of our lives when we realize that some secrets of the universe will remain hidden from us--not because mankind hasn't discovered them, but because those secrets are encoded in complex math and physics problems that few of us have the talent or patience to understand. 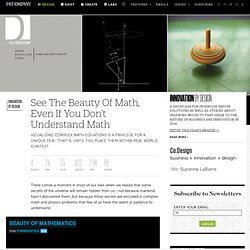 But Beauty of Mathematics, a new video by Yann Pineill & Nicolas Lefaucheux, gives the mathematically challenged a peek into living equations. The animated triptych shows an equation on the left, its quantified schematics in the center, and its real world manifestation on the right. The video is like academic X-ray vision, but in reality, its inspiration was never math or science. It was beauty. “We wanted to explore beauty with an angle as objective as possible, and we thought of science because it's something that you can’t really deny,” Pineill tells Co.Design.

The clip above demonstrates the math behind forces like electricity, probability, and fractals. See more here. [Hat tip: FlowingData] So you Want to be an Effective teacher?