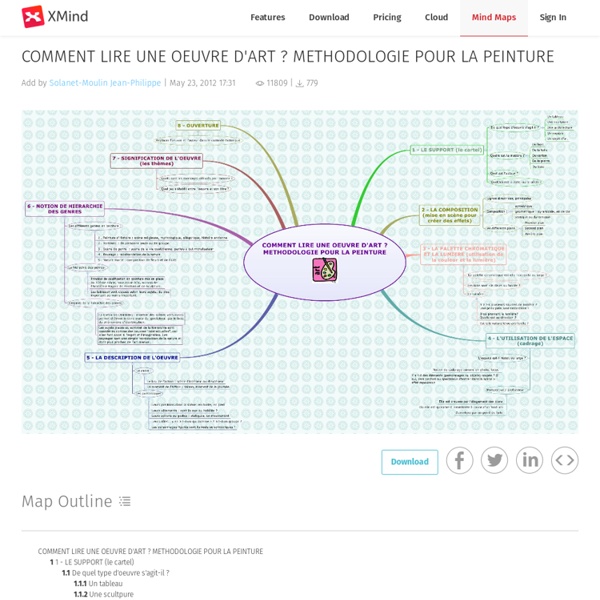 Leonardo Home Page Who was Leonardo da Vinci? He had a keen eye and quick mind that led him to make important scientific discoveries, yet he never published his ideas. He was a gentle vegetarian who loved animals and despised war, yet he worked as a military engineer to invent advanced and deadly weapons. Camila Leon 17.01.12 by Jeff Drawings by Camila Leon. camilaleon.com Tweets by @BooooooomTweets about "@booooooom" Accueil CancelEditDeletePreviewrevert Text of the note (may include Wiki markup) Could not save your note (edit conflict or other problem). Please copy the text in the edit box below and insert it manually by editing this page. Upon submitting the note will be published multi-licensed under the terms of the CC-BY-SA-3.0 license and of the GFDL, versions 1.2, 1.3, or any later version. See our terms of use for more details.

Jheronimus Bosch - The Garden of Earthly Delights About this project The interactive documentary Jheronimus Bosch, the Garden of Earthly Delights provides an in-depth tour though The Garden of Earthly Delights. In a web interface the visitor will be taken on an audio-visual journey, including sound, music, video and images to enrich the storytelling. Synopsis Why is this painting so captivating? - James Earle and Christina Bozsik Diego Velazquez (June 6, 1599 ­ August 6, 1660) was a Spanish painter who was hired by Philip IV at the age of 25. You can learn more about his life here. Interested in learning more about Velazquez’s life as a court painter? How to paint trees, watercolor free lesson Mix a green using yellow ochre and ultramarine. Using the side of the brush, drag it across the rough paper to produce a broken effect, leaving sky holes between the foliage. Add some more ultramarine to darken mix. While the first paint is still wet, apply shadow areas, allowing it to merge, giving soft edges.

Is Google Making Us Stupid? - Nicholas Carr Illustration by Guy Billout "Dave, stop. Stop, will you? Book titles with full text online "The 1688 Paradise Lost and Dr. Aldrich": Metropolitan Museum Journal, v. 6 (1972) Boorsch, Suzanne (1972) 20th-Century Art: A Resource for Educators Paul, Stella (1999) 82nd & Fifth The Metropolitan Museum of Art (2013) The Silk Vortices of Akiko Ikeuchi (click images for detail) I am thrilled to share with you the work of Japanese artist Akiko Ikeuchi. Born in Tokyo in 1964, Akiko received a doctorate in painting from the Tokyo National University of Fine Arts and Music. For over two decades she has been hanging her delicately crafted string sculptures in galleries around Japan, Korea, and New York.

Education for the Future: How Do We Prepare Youth for What's to Come? In a globally connected world where technology is becoming more efficient and necessary, the question that comes to mind is: Are we preparing our youth for the future? Many education specialists are predicting certain trends for the future but how will we get there? The current education model will need to be restructured to understand and attain the skills and characteristics which will be necessary for jobs in the future. Here are some teaching strategies you can easily implement to prepare your students for what’s to come. Education for the Future: 7 Teaching Strategies

Romanesque Art: History, Characteristics Background (c.450-1000) Between Romanesque and antique art there is an interval of many centuries, during which the Northern tribes made their entry into history. This period of folk migration is one of prehistoric arts and crafts, which are well known. Various discoveries of golden ornaments and coins show the long route followed by the Germanic tribes in their journey from the East into France and Spain. The careless and simple beauty of the jewellery of the Merovingian King, Childeric, who died in 481, betrays the influence of classical traditions, which were not, however, just feebly accepted, but adapted in a masterful way, often without full understanding.