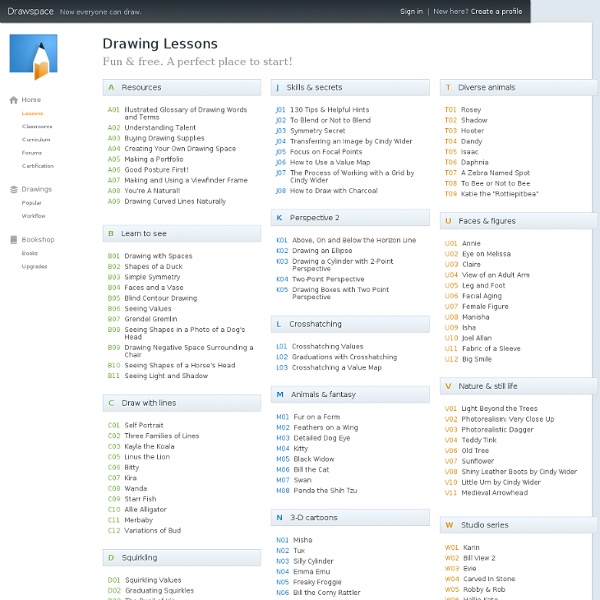 Drawspace Pro Lessons are designed for artists of all levels and educators, and are logically organized into resources and activities. Eventually, all lessons and E-books authored by Brenda Hoddinott will be available here: four to eight brand new lessons and newly-revised older lessons are being added every month! Upgrade Now: Download all 246 lessons and 4 e-books! Try for Free: Download lessons marked as "Free"! Free 1.1.R1 Glossary Of Art Terms Definitions of art-related terms used in the resources and activities of Drawspace Curriculum (updated February 2013) Download 1.1.R2 Travelling Back in Time with Graphite A few fun tidbits of information about the history of graphite $1.49or Upgradeto access all files 1.1.R3 Examining Graphite and Grades Understanding the differences between H and B grades of graphite $0.99or Upgradeto access all files 1.1.R4 Seeing Grades in Drawings Graphite drawings demonstrate the visual qualities of H and B grades of pencils $1.49or Upgradeto access all files

Gorgeous Hand Drawn Illustrations by Si Scott Here you have a series of illustrations called “animals” by Si Scott. Every design is hand drawn perfection! You can tell he has an incredible attention to detail. Enjoy! Create a 3D custom map in Illustrator Software: Illustrator CS3 or later Project time: 1 hour Skills: Master grids, Use the 3D Extrude tool effectively, Shade 3D objects We normally work to an unwritten formula when we do isometric work. We keep things as simple and accurate as possible by using a grid and working with colour guides to keep the icons in the same shade and tint. Over the following steps, we’ll walk through how to create isometric icons that you can build up into a 3D custom map or cityscape image.

How to Draw Hands This short tutorial is a just a small taste of a larger and much more in-depth book I wrote called The Mad Art of Caricature! The book is 175 full-color pages, lavishly illustrated and contains greatly expanded explanations of the concepts presented in this tutorials, as well and a great deal of additional material on caricaturing other facial features, posture, hands, expression and more, techniques on drawing from live models, doing caricature for freelance illustration and for MAD Magazine. This is a must have book for anyone interested in caricature, cartooning or humorous illustration. You can order it online here.

Create futuristic effects with Photoshop’s 3D tools In this tutorial we’ll look at how to experiment with the 3D tools in Photoshop CS6 to create a stylised illustration. While these 3D tools aren’t as complex as those found inside dedicated software like Maya or Cinema 4D, they’re still powerful enough for simple 3D scenes, and perfect for anyone seeking the basic features. With this in mind, I’ll explain how to create a scene with a retro-futuristic look using just the 3D tools provided in Photoshop. We’ll explore their features and use them to create some interesting outcomes. What's going to be in Photoshop CS7?

ANIMATION LESSONS MAIN PAGE With never before seen production work on some of your favorite KC cartoons including Rugrats, Wild Thornberrys, AAAHH!!! Real Monsters, Santo Bugito and more! Part 1: Creating Characters Out of Basic Shapes Judith Ann Braun's Fingers Are Magical With an art career spanning more than three decades, Judith Ann Braun has tested the limits of her artistic musculature. She began as a self-described “realistic figure painter,” and worked through the struggles common to anyone who endeavors upon an artistic pursuit, that of searching for one’s own voice in the chosen medium. Fast forward to the 21st century where the evolution of Braun’s work has brought us to the Fingerings series, a collection of charcoal dust landscapes and abstracts “painted” using not brushes but her fingertips.