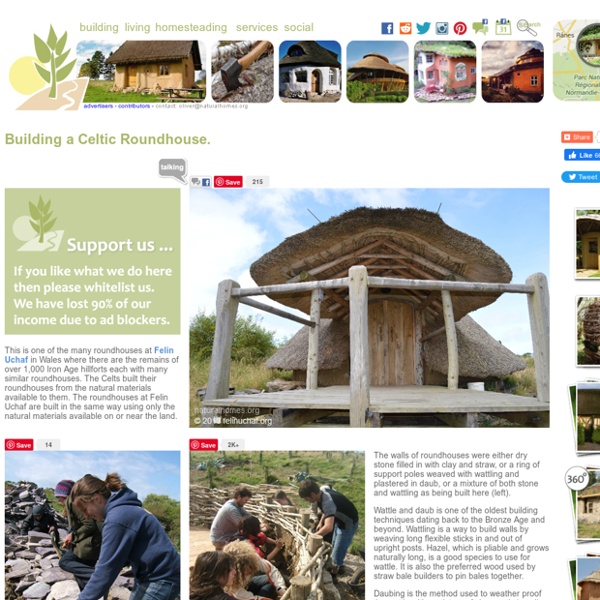 The walls of roundhouses were either dry stone filled in with clay and straw, or a ring of support poles weaved with wattling and plastered in daub, or a mixture of both stone and wattling as being built here (left). Wattle and daub is one of the oldest building techniques dating back to the Bronze Age and beyond. Wattling is a way to build walls by weaving long flexible sticks in and out of upright posts. Hazel, which is pliable and grows naturally long, is a good species to use for wattle. It is also the preferred wood used by straw bale builders to pin bales together. Daubing is the method used to weather proof the wattle with a mixture of clay, earth (sand), straw and manure. The upright poles are usually around 4-6 inches thick, straight with their ends charred in a fire (see bottom left) and buried about 8-12 inches deep.

Watch This Guy Build An Amazing Shelter In The Woods Using Only Dirt, Trees, & Rocks In our modern culture it’s rare to find many individuals with the knowledge to survive well should they find themselves lost in the woods or in need of survival skills. Perhaps this is because we think the chances we might ever need to use skills like this are low, or maybe we simply take our lifestyles for granted. Either way, I do find it interesting to see how many friends I have that don’t even know the first thing about building a fire out in the woods. In the video below, a man builds an amazing shelter in the woods using only the resources you would find there. Dirt, trees, rocks, and anything else he could find in his immediate surroundings are used to build a home better than many of us might be able to build even if we had access to Home Depot! Maybe this could be inspiration for us to make sure we learn even the basics like building a fire or hanging food in a tree to keep away from animals.

Patrick Nadeau's Green-Roofed Wave Home Changes Appearance with the Seasons in France Architect Patrick Nadeau designed his green-roofed Wave House (La Maison-vague) as one of 63 experimental houses being built near Reims in France. The vegetated semicylindrical shell acts as thermal insulation and glides gently to shelter the space while the rim surrounding the wooden shelf transforms into a big bench. The Wave Home has two floors. On the ground level the living room, kitchen and multimedia space open up towards the exterior by sliding walls. The upper level houses two bedrooms and a bathroom that can be accessed by a mezzanine.

Cordwood Construction Cordwood Flooring My neighbor Steve called up the other day and asked if I’d like to come over to see his new floor. Steve is a contractor by trade, he does beautiful work, so I jumped at the chance. When I walked in the door my mouth fell open. How Whole Turmeric Heals The Damaged Brain Long considered impossible to accomplish, new research reveals how a simple spice might contribute to the regeneration of the damaged brain. Turmeric is hands down one of the, if not the, most versatile healing spice in the world with over 600 experimentally confirmed health benefits, and an ancient history filled with deep reverence for its seemingly compassionate power to alleviate human suffering. But, most of the focus over the past decade has been centered on only one of its many hundreds of phytocompounds: namely, the primary polyphenol in turmeric known as curcumin which gives the spice its richly golden hue.

650 Sq. Ft. Prefab Timber Cabin Prefabricated homes are increasingly popular for a variety of reasons, among them the relatively quick build time, the ecological advantages, and the flexibility they can provide across a range of budgets. Most of them can be installed in a day, cost less than any other home on the market and are welcoming and comfortable. The house has a wooden structure, which is well isolated and features a modern and airy interior. The beautiful large windows of the house contribute to the brightness of the interior and make it perfect for either a permanent residence or a holiday house.

Oregon Couple Builds Norwegian Style “Stabbur” Log Cabin for $100 Using mostly natural and reclaimed materials this cute little 130 square foot cabin (not including loft space) for about $100. That equates to about $0.77 cents (USD) per square foot! This just shows what you can do for very little money out of pocket. People make the mistake of thinking that one must have tens of thousands or even hundreds of thousands of dollars to build a nice home for their family. When in reality one need only work hard, use creative material gathering techniques, and spend just a fraction of the money need to build a traditional stick built wood frame home. The point being is that you can build your home for much less that you might think.

Sugar Harms Your Brain Health, Drives Alzheimer’s Epidemic By Dr. Joseph Mercola Guest Writer for Wake Up World Steam Bent Shingles Steam Bent Shinglesalso known as cedar shingle thatch roofs. Shingle thatch or American thatch is the technique of using cedar shingles to recreate the texture and look of a reed-thatched roof. The shingles are bent along a curved framing support and roof edges, and laid in undulating, wavy courses. www.customshingles.com American thatch home with carrot rake detail. A carrot rake or gable run is where the roof starts with a large diameter at the ridge, and tapers down, sometimes to a point, at the eave. www.customshingles.com Steam bent wooden shingles laid in a wave pattern. www.customshingles.com