How to Build a Rainwater Collection System: 9 steps 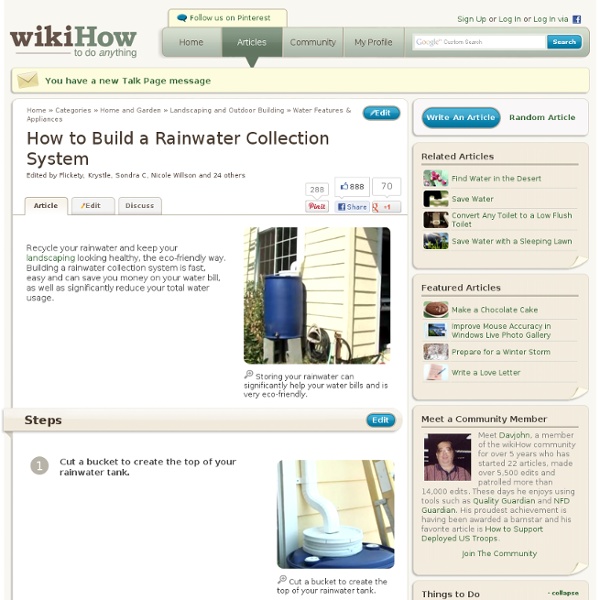 Steps Method 1 of 4: Getting Rain Barrel Supplies 1Obtain one or more water storage barrels. You can buy a water storage barrel online, but it's cheaper to get a used one from a company that uses large barrels to store food and other merchandise (just be sure to clean it thoroughly with soapy water). A rain barrel can also be made from a large plastic trash can. Get a barrel that will hold 30 to 55 gallons of water. 2Get additional supplies to turn the barrels into a water collection system. Method 2 of 4: Building a Rain Barrel Platform 1Level an area right next to your downspout. 3Stack concrete blocks on top of the pea gravel. Method 3 of 4: Adding the Spigot and Overflow Valve 1Drill a spigot hole in the side of your barrel. 4Make an overflow valve. Method 4 of 4: Assembling the Collection System 1Connect the downspout elbow to the downspout. 4Connect the additional barrels. Tips Ad Warnings Sources and Citations

Solar still Solar still built into a pit in the ground Solar still "Watercone" A solar still is a simple way of distilling water, using the heat of the Sun to drive evaporation from humid soil, and ambient air to cool a condenser film. Two basic types of solar stills are box and pit stills. In a solar still, impure water is contained outside the collector, where it is evaporated by sunlight shining through clear plastic. Rainwater harvesting Rainwater harvesting is the accumulation and deposition of rainwater for reuse on-site, rather than allowing it to run off. Rainwater can be collected from rivers or roofs, and in many places the water collected is redirected to a deep pit (well, shaft, or borehole), a reservoir with percolation, or collected from dew or fog with nets or other tools. Its uses include water for gardens, livestock, irrigation, domestic use with proper treatment, and indoor heating for houses etc. The harvested water can also be used as drinking water, longer-term storage and for other purposes such as groundwater recharge. Advantages[edit]

rainwater harvesting There’s a lot of advice floating around the internets about how to make a rain barrel. Most barrel pundits suggest drilling a hole in the bottom of a barrel and installing a faucet, a kind of connection called a “bulkhead fitting”. Unfortunately such improvised fittings have a tendency to leak. Best Animals for the Small Homestead Best Animals for the Small Homestead by Peggy Deland If one of your goals is self-sufficiency (or close to it) and you're not a vegan, you'll need a source of milk, eggs, and possibly meat. Even if you are a vegan, keeping animals on your homestead can provide you with natural fiber or wool to sell. Raising your own animals also gives you peace of mind -- you know that your animals were raised humanely and treated with care.

Practical Survivor Water procurement during a survival situation could possibly be your number one concern. The length of time you body will survive without proper hydration varies under different conditions. Increase in ambient temperature and activity will lessen your chances of survival. Under arid conditions the human body can succumb to dehydration within a few days. Collecting rainwater now illegal in many states as Big Government claims ownership over our water (NaturalNews) Many of the freedoms we enjoy here in the U.S. are quickly eroding as the nation transforms from the land of the free into the land of the enslaved, but what I'm about to share with you takes the assault on our freedoms to a whole new level. You may not be aware of this, but many Western states, including Utah, Washington and Colorado, have long outlawed individuals from collecting rainwater on their own properties because, according to officials, that rain belongs to someone else. As bizarre as it sounds, laws restricting property owners from "diverting" water that falls on their own homes and land have been on the books for quite some time in many Western states. Only recently, as droughts and renewed interest in water conservation methods have become more common, have individuals and business owners started butting heads with law enforcement over the practice of collecting rainwater for personal use. "Utah's the second driest state in the nation.

Build a Rainwater Collection System Ten years ago, I acquired two 55-gallon plastic drums to store an emergency supply of water for the impending Y2K disaster occurring at the stroke of midnight 2000. Of course, I became suspicious when the plane I was flying on did not fall out of the sky on 9/9/99 and my trusty Honda still ran like a charm well past January 1, 2000. Being the positive person that I am, I was grateful to acquire several storage containers of personal hygiene items, first aid supplies and all kinds of camping paraphenia that I still use.

Beef 101 Infographic suggests buying a whole side I wrote a post at the end of March about how you can lower meat costs by purchasing sides of beef. The infographic below is along the same lines, but contains more information about the health benefits of beef, and offers a simple breakdown of the different types of cuts you can buy at the grocery store, and some easy guides to shopping for beef. I find that guides like these can be really helpful for novice shoppers and seasoned pros alike when it comes to meat—I think it’s never a bad idea to reinforce best practices. Desert Survival: The Solar Still (DesertUSA) There was the man in tattered clothing, his body sweaty, his swollen eyes squinting over miles of sand. Cattle skulls and scorpions scattered the ground while vultures circled overhead awaiting their imminent feast. In a futile last glance, he held himself up with shaking arms. Then his head cocked to the side like a confused dog -- could it really be?

Gardening in a drought Guest post by Mark M. NOTE: This may be something to print out and store in your SurvivalMom Binder for future reference. image by International Center for Tropical Agriculture I have lived in many countries over the years, and have always had a vegetable garden. Commercial Rainwater Harvesting Systems The practice of rainwater harvesting dates back to the earliest days of civilization yet was nearly lost in the age of inexpensive and readily available municipal water supplies. Lately, with the cost and supply of municipal water becoming an issue, there has been a growing resurgence of interest in rainwater harvesting by home and building owners. Thousands of small systems suppliers have emerged to fill the demands of homeowners across the country. But there are special challenges for the more sophisticated systems installed in commercial and institutional buildings. The vastly larger quantities of rainwater collected require more sophisticated processing and storage, and the engineering standards and approval requirements are significantly more rigorous. Wahaso focuses entirely on the commercial and institutional building market – and has developed proven, large-scale rainwater harvesting systems that meet rigorous building and regulatory requirements.

Homemade "Vicks Vapor shower disks" Have you seen the commercials for the Vicks Vapor shower disk thingies? You put one of these disks in your shower, and voila thanks to the vapors in it, you're magically healed, your cold is gone, and your face is shockingly free of snot. I always used to watch the "Noxema girl" splashing water on her face and wondered how she was able to wash her face without being completely overrun with boogers. I'm the only one?