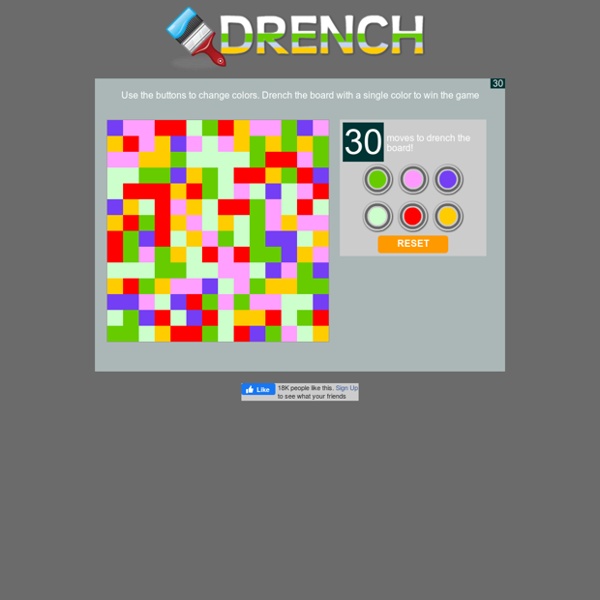 Ultimate Tic-Tac-Toe Updated 7/16/2013 – See Original Here Once at a picnic, I saw mathematicians crowding around the last game I would have expected: Tic-tac-toe. As you may have discovered yourself, tic-tac-toe is terminally dull. There’s no room for creativity or insight. Good players always tie. Games inevitably go something like this: HackerTyper Neo "Hack" like a programmer in movies and games! WATCH THE VIDEO You can exit fullscreen by pressing F11. Simply randomly mash your keyboard and code will display on your screen. Press / * - + 2 0 on your numpad to activate various effects, or ESC to remove them Curvy in HTML5 Curvy is a HTML5 puzzle game using the canvas element. Just rotate the tiles so that like colors connect. Modernizr tells me you don't have canvas support in your browser. Sadly, this game uses technology that's only in browsers with HTML5 support.

Pacxon - Online Game Additional Information: Use Pacman to capture sections of the board in Pacxon. Clear 80% to progress to the next level. Pacxon is the most popular game on the whole site! Werewolf “Werewolf is a simple game for a large group of people (seven or more.) It requires no equipment besides some bits of paper; you can play it just sitting in a circle. I’d call it a party game, except that it’s a game of accusations, lying, bluffing, second-guessing, assassination, and mob hysteria.” – Andrew Plotkin, creator of Werewolf Werewolf is based on the game Mafia, which was created in 1986 by Dimitry Davidoff, a psychology student in the USSR.

Fundamentals - Fallout 3 Wiki Guide - IGN Last Edited: September 9, 2013 at 10:13 PM Overview[edit] Fallout 3 is a post-apocalyptic western RPG with enough shooting mechanics that it is, indeed, a full-fledged hybrid title. You're given control of a male or female (depending on who you choose) who lives in a heavily-guarded nuclear fallout shelter. There's a big, bad post-nuclear world outside of the safety of Vault 101 -- your home -- but it won't be until you are 19 years that you finally get out into the world to see for yourself the devastation of nuclear warfare. 25 Hidden Locations In Grand Theft Auto 5 Even Super Fans Haven't Found Grand Theft Auto V has long been one of the shining examples of what an open-world game should be like. If you haven't played it, you definitely have something to look forward to when you do pick the game up. When I first played GTA V, I felt totally overwhelmed by the freedom of it all. You might laugh at me, but I actually had a momentary sense of panic where I did not know exactly what I should do next. (Go ahead.