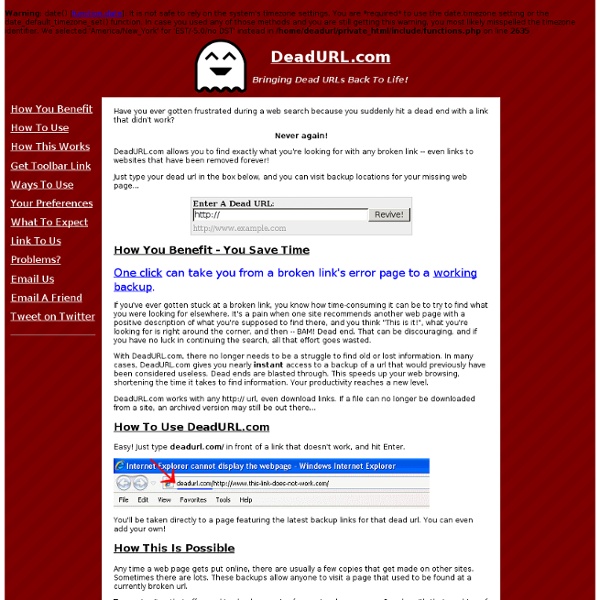 Have you ever gotten frustrated during a web search because you suddenly hit a dead end with a link that didn't work? Never again! DeadURL.com allows you to find exactly what you're looking for with any broken link -- even links to websites that have been removed forever! Just type your dead url in the box below, and you can visit backup locations for your missing web page... How You Benefit - You Save Time One click can take you from a broken link's error page to a working backup.

Sisters are Building it for Themselves: How the Victoria Mxenge women changed the housing game Figures recently released by the City of Cape Town show that the number of shack fires which occurred in the Western Cape in 2014 reached just under 8,000, almost double the previous year’s 4,832. At least 20 people died in these fires, with countless others left homeless. Those numbers are a reminder of how perilous shack living can be, as well as testament to the housing backlog in a rapidly-expanding city. That backlog currently stands at around 400,000, with a City of Cape Town report last February stating that the city was only able to build just over 6,000 homes annually based on its resources.

The 101 Most Useful Websites on the Internet - Digital Inspiration Here are the most useful websites on the Internet that will make you smarter, increase productivity and help you learn new skills. These incredibly useful websites solve at least one problem really well. And they all have cool URLs that are easy to memorize thus saving you a trip to Google. Also see: The Best Android Apps Also see: The Best Mac Apps and Utilities 5 No-Installation Apps to Copy-Paste or Transfer Files Quickly We have all faced this situation before. Your friend or colleague has some files you need, but you don’t have a USB drive. It’s a large file too. So what if I told you there’s a simple way to transfer those files wirelessly without installing any apps?

15 Top Search Engines For Research After hours spent scrolling through Google and pulling up endless clickbait results, you’re frustrated with the internet. You have a paper to write, homework to do and things to learn. You know you won’t get away with citing Wikipedia or Buzzfeed in your research paper. Even the big news engines aren’t scholarly enough. The Podcast about African History, Culture, and Politics Hikabwa Decius Chipande (PhD 2015 Michigan State) on the political and social history of football (soccer) in Zambia. He discusses becoming an historian; the game’s relationship with British colonizers, the copper mines, and postcolonial governments; and the archival research and oral interviewing process. Chipande concludes with insights from his extensive experience with sport development in Africa. Boycotting South African goods, San Francisco, 1962. Used by permission of ILWU. Peter Cole (Western Illinois, SWOP [Wits]) compares Durban and San Francisco, maritime union solidarities, the anti-apartheid movement, and technological change in the two ports.

Passwords - SkullSecurity Password dictionaries These are dictionaries that come with tools/worms/etc, designed for cracking passwords. As far as I know, I'm not breaking any licensing agreements by mirroring them with credit; if you don't want me to host one of these files, let me know and I'll remove it. Leaked passwords 5 Great Alternatives to Google Docs You Should Consider More and more word processing is moving to the web these days. This has many advantages. The documents are accessible from anywhere, they’re open to collaboration and sharing, it’s easy to import and export, and it’s just a better way to do work in this constantly connected world.

15 Great Mindmapping Tools and Apps Mindmapping is the process of drawing up diagrams that show relations between various ideas, tasks or information. For many of us this shows to actually be a way of taking notes that can be more useful than just writing down keywords or sentences like we do on a to-do list. By drawing mind maps you actually visualize your tasks and how each task can influence each other in a better way, making your brain remember more easily and/or come up with new ideas. The Tools There are various tools for mindmapping out there, both free and paid versions.