Tutorial 4: Make a Game in 60 Minutes 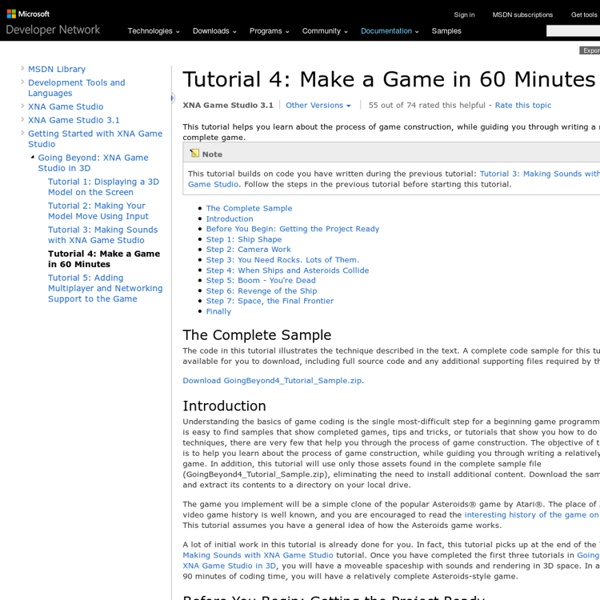 JavaScript 101, Beginner's Guide to Learning Block / Inline JavaScript JavaScript is a programming language that web browsers understand. You can use it to make your web pages interactive by: Responding to user actions and changes on the pageManipulating the web page’s contents and behaviourCommunicating with the user directly You can do just about anything you want with a web page, using JavaScript. Russian Company Displair Creates Interactive Cold Fog Computer Screens - Video Vault It seems every other day a story breaks that claims to have the next Minority Report-like technology—but this one comes closer than any we've seen so far. Russian company Displair projects images into a cold fog and then uses an infrared camera to capture user movements. As TechCrunch reports, Displair "has only 0.2 seconds lag time between gesture and computer reaction, compared to 0.1 second lag time of Kinect," making it a close competitor to the motion-sensing device for the Xbox 360 as far as accuracy, but going about it in a whole different way.

Metrics 2.0: Video Game Addiction: 81% of American Youth Play; 8.5% are Addicted Reports from around the world suggest that gaming addiction is real and on the rise. With nearly 8 in 10 American youth (81%) playing video games at least one time per month, including 94% of all boys playing, this certainly raises concerns about video game addiction. In US, 8.5% of youth gamers (ages 8 to 18) can be classified as pathological or clinically “addicted” to playing video games. Most youth play video games and many feel that they may be playing too much, according to an Harris Interactive survey. 23% of youth say they that have felt “addicted to video games”, with about one-third of males (31%) and a little more than one in ten females (13%) feeling ”addicted.” 44% of youth also report that their friends are addicted to games. Video game playing time differs by age as well as gender.

10 Best Sexual Drinking Games Some of the best sexual drinking games can be done either in an intimate setting with only you and your girlfriend or you can make it a party and have multiple people. The ten most commonly played sexual drinking games are: Nine cans of beer or the floor. The Shapes of CSS Learn Development at Frontend Masters CSS is capable of making all sorts of shapes. Squares and rectangles are easy, as they are the natural shapes of the web. Add a width and height and you have the exact size rectangle you need.

Windows 7: 77 Windows 7 Tips Windows 7 77 Windows 7 Tips Edited by Keith Ward At a Glance: Make Windows 7 faster Get more done with Windows 7 The best Windows 7 shortcuts Securing Windows 7 Windows 7 may be Microsoft’s most anticipated product ever. Ontario News: Brandon Crisp found dead BARRIE–It was a heartbreaking end to a remarkable three-week search for a teen who had run away over an Xbox. On the ground, hundreds of police and volunteers trudged through muddy fields outside Barrie, while in cyberspace police officers probed the virtual world of online gaming. But yesterday morning, all hope of finding 15-year-old Brandon Crisp alive was lost when deer hunters found the body of a teen in a heavily wooded area. Police said the body, which appears to be Brandon, was found about two kilometres from where the boy's abandoned bicycle was found two weeks earlier. "We're definitely all moved by this ...

Alternative to CAPTCHA - Protect Web Forms from Spam with Javascript What’s the ideal check to protect your web forms from spambots? No one really likes having to copy squiggly letters from a CAPTCHA image, but is there a better alternative? The ideal check would be one that most people don’t ever notice, but which effectively keeps out all spambots. In this tutorial, I describe a technique that uses Javascript to recognise human activity based on screen events, which works very well for us. Home Of Happy Wheels - Happy Wheels Full Version Hello pals. I'd like to continue hosting the flash version of Happy Wheels as long as possible. With the loss of certain ad networks, I'm going to try out a few different ad formats on this site as I continue to attempt to regain some of the revenue that went missing. I'll be making a few minor changes here and there to see whatever works best. Nothing should be annoying.

Beginning Game Development: Part VIII - DirectSound Welcome to the eighth article on beginning game development. We have spent a lot of time working with the graphics capabilities of DirectX. We also covered how the DirectX API allows us to control input devices. Now we are going to look at another facet of DirectX, the ability to control sound devices. This capability is found in the DirectSound and AudioVideoPlayback namespaces.