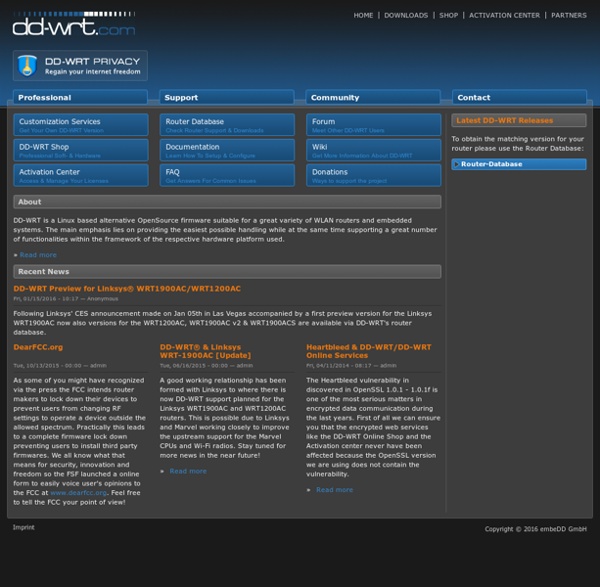 The Heartbleed vulnerability in discovered in OpenSSL 1.0.1 - 1.0.1f is one of the most serious matters in encrypted data communication during the last years. First of all we can ensure you that the encrypted web services like the DD-WRT Online Shop and the Activation center never have been affected because the OpenSSL version we are using does not contain the vulnerability. Currently the main focus of the Heartbleed discussion lies on web servers using SSL/TLS but other services on Linux systems are also using OpenSSL. By default none of these services is enabled in DD-WRT - nevertheless it is important that you check your router settings to find out if you might be affected by Heartbleed.

8 Linux Commands: To Find Out Wireless Network Speed, Signal Strength And Other Information Linux operating systems comes with various set of tools allowing you to manipulate the Wireless Extensions and monitor wireless networks. This is a list of tools used for wireless network monitoring tools that can be used from your laptop or desktop system to find out network speed, bit rate, signal quality/strength, and much more. #1: Find out your wireless card chipset information Type the following command to list installed wireless card, enter: $ lspci $ lspci | grep -i wireless $ lspci | egrep -i --color 'wifi|wlan|wireless' Sample outputs:

Wireless Security - WiFi Wireless Home Network Security Tips Many folks setting up wireless home networks rush through the job to get their Internet connectivity working as quickly as possible. That's totally understandable. It's also quite risky as numerous security problems can result. wall m0n0wall is a project aimed at creating a complete, embedded firewall software package that, when used together with an embedded PC, provides all the important features of commercial firewall boxes (including ease of use) at a fraction of the price (free software). m0n0wall is based on a bare-bones version of FreeBSD, along with a web server, PHP and a few other utilities. The entire system configuration is stored in one single XML text file to keep things transparent. m0n0wall is probably the first UNIX system that has its boot-time configuration done with PHP, rather than the usual shell scripts, and that has the entire system configuration stored in XML format. In m0n0wall 1.8.1, the base system has been switched to FreeBSD 8.4 for better support of recent hardware, and there have been significant improvements, new features and bug fixes in many areas.

Antenna on the Cheap (er, Chip) Antenna on the Cheap (er, Chip) Rob Flickenger Jul. 05, 2001 05:20 PMPermalink Like many would-be 802.11b hackers, I'm increasingly obsessed with pushing more bits further and faster for less cost (I believe the unofficial goal of our community wireless project is to provide infinite bandwidth everywhere for free. Of course, there are problems with approaching infinity, but it's still fun to try!) The work that Andrew Clapp and others have done is helping to demystify the ancient black magick of Resonance (i.e. antenna building). My SamKnows probe just installed First publication of this article on 15 February 2012Last update on of 30 September 2012 I just received and installed my SamKnows box, currently distributed in many households in Europe, to measure Internet access performance and characteristics. The probe (named "Whitebox") is much larger than the RIPEAtlas. Here is the device: The Terms of Use (which I do not find on the public part of the Web site) forbid me to give public information about the SamKnows box (without a prior written authorization) but I decided I can at least publish the picture. Once connected to the local network, it starts active measurements to various points on the Internet and reports them to its controller.

How to Check If Your Email Account Has Been Hacked The news is full of reports of hackers breaking into online databases and stealing personal information from many thousands of accounts. Many of these compromised accounts have been published on the Internet by hacker groups like LulzSec and Anonymous. One way to check if your email account is among those published is described in the New York Times.

PuTTY: a free telnet/ssh client Home | FAQ | Feedback | Licence | Updates | Mirrors | Keys | Links | Team Download: Stable · Snapshot | Docs | Changes | Wishlist PuTTY is a free implementation of SSH and Telnet for Windows and Unix platforms, along with an xterm terminal emulator. It is written and maintained primarily by Simon Tatham. The latest version is 0.68. Download it here.

Network Monitoring Tools Les Cottrell, SLAC. Last Update: December 14, 2015 ESnet | ESCC | PinGER Internet monitoring | Tutorial This is a list of tools used for Network (both LAN and WAN) Monitoring tools and where to find out more about them. The audience is mainly network administrators. You are welcome to provide links to this web page. Please do not make a copy of this web page and place it at your web site since it will quickly be out of date. See here if you wish to suggest additions or changes. Cantenna 5.5 GHz cantenna as a feedhorn Cantennas are typically used to increase the range of (or discover) Wi-Fi networks. Construction[edit] The cylinder portion of the can may consist of metal-coated paperboard. Although some designs are based on a Pringles potato chips can, this tube is too narrow to increase the signal by a useful amount.[1] However, a cantenna can be made from various cans or tubes of an appropriate diameter.[2] Some designs include a pole mount to elevate the cantenna.[3]