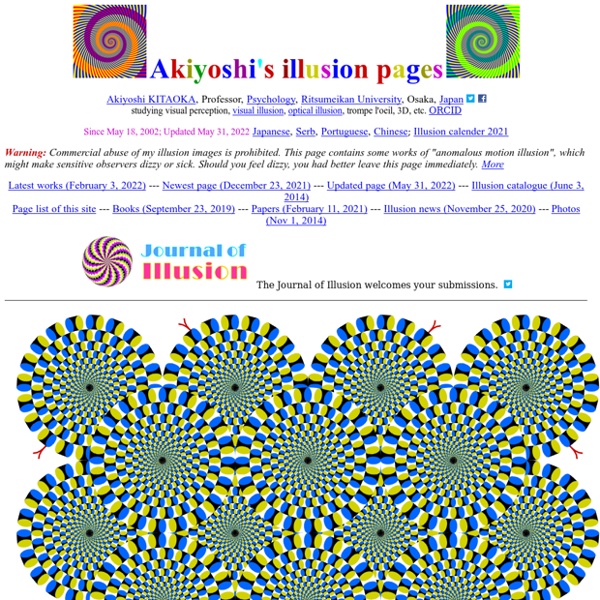 Art of the Menu About Art of the Menu, is a division of UnderConsideration, cataloguing the underrated creativity of menus from around the world. Art of the Menu uses Typekit to render Proxima Nova by Mark Simonson and Adelle by Type Together. Art of the Menu is run with Six Apart’s MovableType 6.3.2 Selfie deaths: 259 people reported dead seeking the perfect picture Image copyright Getty Images The quest for extreme selfies killed 259 people between 2011 and 2017, a 2018 global study has revealed. Researchers at the US National Library of Medicine recommend that 'no selfie zones' should be introduced at dangerous spots to reduce deaths. These would include the tops of mountains, tall buildings and lakes, where many of the deaths occurred. Drowning, transport accidents and falling were found to be the most common cause of death.

35 Insane Optical Illusions That Will Make You Question Your Sanity - distractify These squares are actually the same exact color. Hold your finger over the boundary between the two shapes and see them change. Source: americanscientist.org The Cornsweet illusion exploits the brain's lateral inhibition, which creates more contrast between the two objects when they have different colored edges. Cross your eyes and you should be able to see a familiar face. 136 Paintings by Gustav Klimt Now Online (Including 63 Paintings in an Immersive Augmented Reality Gallery) At the end of World War II the Nazis burned an Austrian castle full of masterpieces, including three paintings by Gustav Klimt entitled Philosophy, Medicine, and Jurisprudence. Called the “Faculty Paintings,” these were commissioned by the University of Vienna for the ceiling of its Great Hall in 1900, then, upon completion seven years later, were deemed pornographic and never exhibited. Until now, they were preserved for posterity only in black and white photographs.

Optical Illusions, Videos, Images, Brain Teasers and more! Good Morning and Happy Monday to everyone! Hope the weekend was good and you had a Happy Father’s Day! Today’s optical illusion is remarkable one because it is going to force anyone that sees it to really look at it and use their imagination! Take a Virtual Tour of Hieronymus Bosch's Bewildering Masterpiece The Garden of Earthly Delights Art historians have argued about the meaning of The Garden of Earthly Delights—Hieronymus Bosch’s enormously sized, lavishly detailed, and compellingly grotesque late 14th- or early 15th-century triptych—more or less since the painter’s death. What does it really say about the appearance and fall of man on Earth that it seems to depict? How seriously or ironically does it say it? Does it offer us a warning against temptation, or a celebration of temptation?

Danny Haas Crafts Magnificent 'Star Wars' and Superhero Prints [Art Until the day comes when Shepard Fairey starts making Star Wars posters, Danny Haas' Darth Vader and Boba Fett prints will have to tide you over. He's got some pretty rad designs, though, and his Yoda, Luke and Han prints would all be transferable to t-shirts in a perfect world.Haas takes a handful of different approaches to his work, which he shares on his own website and sells through his Society6 page. A few of his other pieces are available on shirts and iPhone covers there, including a Fairey-ish series of secret identity hero works featuring Superman, Batman and Iron Man. All this set seems to be missing is a Composite Superman iPhone skin and a Lando Calrissian print (and it should go without saying that a Lando T-shirt done in Haas' style would blow up multiple Death Stars with its awesomeness). Check out our favorite Haas products that do exist and sound off with your own requests after the jump.

Hypnagogia and Hypnopompia Hypnagogia is the imagery, sounds and strange bodily feelings that are felt at “sleep onset.” This is a simplification though, as researchers have noted hypnagogic imagery in the lab at periods of quiet wakefulness as well as stage 1 sleep. Others have correlated hypnagogia with pre-sleep alpha waves and also REM intrusion into sleep onset. The truth is that the wake-sleep transition is still not understood. And neither are its trippy visuals. whispy lights, multi-dimentional geometric objects, or a sudden image like a stranger’s face Impossible Triangle - The Illusions Index The Impossible Triangle (also known as the Penrose Triangle or the Impossible Tribar) was first created by Oscar Reutersvärd (1915 - 2002), a Swedish graphic artist known as the ‘father of the impossible figure’. It is anecdotally, but widely reported that he created it in 1934, aged 18 while doodling as a student in his Latin class. The illusion was independently discovered later and popularised by Lionel Sharples Penrose (1898 -1972), a British psychiatrist, geneticist, and mathematician, and his son Sir Roger Penrose (1931 -), a British mathematician, physicist and philosopher of science. Penrose and Penrose published the illusion in the British Journal of Psychology in 1958. The Penrose Triangle is an impossible figure (or impossible object or undecidable figure): it depicts an object which could not possibly exist. It is impossible for the Impossible Triangle to exist because in order for it to exist rules of Euclidean geometry would have to be violated.

The MoMA Teaches You How to Paint Like Pollock, Rothko, de Kooning & Other Abstract Painters Some may find her insufferable, but most readers adore her: the insouciant little pig Olivia—New Yorker, art lover, and Caldecott Medal winner—has forever embedded herself in children’s literary culture as an archetype of childhood curiosity and self-confidence, especially in scenes like that of the first book of the series, in which the fearless piglet produces her own drip painting on the wall of the family’s Upper East Side apartment after puzzling over Jackson Pollock’s work at the Metropolitan Museum of Art. (Olivia also admires Degas, aspires to the ballet, and dreams of being Maria Callas.) Olivia’s headstrong challenge to Pollock is infectious, and enacts a notion common among amateur viewers of Abstract Expressionism—“I could do that.” Her “Jackson Piglet Wall Painting” features in a book that gives children their own set of instructions for making a pseudo-Pollock (on paper, of course).

Gurafiku: Japanese Graphic Design Japanese Poster: Hiroshima Appeals. Kenya Hara, Yoshitaka Mizutani. 2017 Started in 1983, Hiroshima Appeals is a yearly poster project in observation of the atomic bombing of Japan in 1945 with the goal of promoting peace at home and abroad. Designer Kenya Hara writes: “This is an illustration drawn from the perspective of looking up from below a mushroom cloud. The embodiment of the worst evil in human history explodes just overhead of the people of Hiroshima and of Japan.