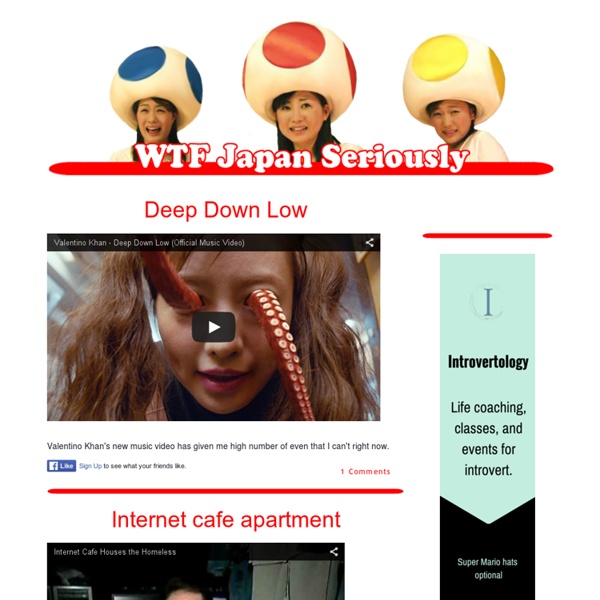 Why people can’t say I’m a proper adult With today being Children’s Day in Japan, I present a survey that is sort-of connected to the theme, a look with goo Ranking at hidden secrets that prevent people rating themselves as proper adults, for both men and women. Demographics Between the 23rd and 25th of March 2009 1,043 members of the goo Research monitor group completed a private online questionnaire. 52.2% of the sample were male, 7.8% in their teens, 17.1% in their twenties, 28.2% in their thirties, 24.8% in their forties, 11.4% in their fifties, and 10.7% aged sixty or older. Blog New Flavour in Your Ear: Erosion Flow - 'Bedroom Jam' Straight outta Copenhagen, Henrik Koefod AKA Erosion Flow drops a new EP packing a tight list of low-slung, grime-tinged house and hazy, beat-driven electronica. Having already been featured on XLR8R and now set to share the stage with acts like Simian Mobile Disco, Bicep and Oneman at the Somerley Tea Party Festival, we dare say that this particular young Copenhagen upstart looks destined for big things.

Diana Mini » How-To&#039;s Loading the film Turn the rear door switch [1] to open and slide the rear door off. Move the pressure plate [2] down and put the new 35mm film into the left hand side. Checking out your Japanese girlfriend’s room goo Ranking recently took a look at what people would want to check out the first time they visited their partner’s room, for both women checking out their boyfriends and men checking out their girlfriends. Demographics Between the 20th and 22nd of August 2009 1,077 members of the goo Research monitor group completed a private online questionnaire. 51.1% of the sample were male, 8.4% in their teens, 14.2% in their twenties, 26.7% in their thirties, 28.2% in their forties, 11.1% in their fifties, and 11.2% aged sixty or older. Note that the score in the results refers to the relative number of votes for each option, not a percentage of the total sample. It is interesting to note that many of the answers seem to centre around checking out that your partner is not already attached – I don’t really know what the motivation for that is.

Mother of KitKat. One nation, indivisible... Growing up with Vader You had one job, Ms. Frizzle. Characteristics of Narcissistic Mothers 1. Everything she does is deniable. There is always a facile excuse or an explanation. Cruelties are couched in loving terms. Aggressive and hostile acts are paraded as thoughtfulness. Blog A few days ago I put out this new Quirkology video. If you haven’t seen it yet, take a look. Hope you enjoyed that. Oh No They Didn&#039;t! - Silent Night tops Christmas carol list 'Silent Night has topped the list of Britain's most recorded Christmas song of all time. The 190-year-old Austrian carol beat more recent festive compositions such as Winter Wonderland to the top spot in a list of more than 170 recordings, according to music licensing company PPL. "Silent Night is a beautiful carol which encapsulates the feeling of Christmas entirely," said Mike Dalby, lead reporting analyst at PPL. "Everyone from punk band The Dickies right through to Sinead O'Connor has recorded it, which exemplifies just how much it resonates with all different types of artists." PPL compiled the list using a database of about 1,800 Christmas themed recordings. The original version of the carol, Stille Nacht, was written in 1816 in Austria by the priest Father Joseph Mohr.

Oh No They Didn&#039;t! - 10 Shows You Should Watch Now That They’ve Ended An entertainment blogger at UnrealityMag.com lists 10 shows you should watch now that they've ended. I’m writing this post in response to everyone who keeps asking me “What are good shows to watch?” which as an entertainment blogger, is a question I should naturally have an answer to. I could recommend any number of titles that are still on the air, but to me, nothing is more frustrating that watching a show on DVD, then switching to watching it week to week. In fact, I think the way to best watch TV is to wait until the entire series is over, and then watch them in big chunks whenever you have time, finishing an entire series in anywhere from a few days to a month. If I had the willpower to wait years for many of my current favorite shows to go off the air, I’d do that with them as well, but now I only do it on occasion.

S.K.Y. » Anan Sex Special I’m gonna show some captures I did from a girls magazine called Anan that made a some months ago. This magazine made the special with some collaboration from the Japanese Government try to incite Japanese girls to practice more sex and give birth to more girls (One big problem in Japan nowadays). At the first part of the magazine they explain the girls how to turn on their boyfriends, another part is full of typical questions with explanations from an expert and the last one if full of interesting charts. Bridging the Communication Gap Between Men and Women Connect by Kim Lance, associate publisher of Online Dating Magazine Bridging the Communication Gap Between Men and Women You’ve probably been there before. You sit down for a latte with your best friend and immediately her eyes start to swell with tears as she blurts out “I don’t know why, but he just won’t open up to me!”

The Tokyo-based magazine about &quot;Design and Making Things&quot; » Archive » How to prepare for Hanami Sakura, the Japanese cherry blossom, is a miracle that happens over night! While the whole nation impatiently watches the Sakura-forecast on the news every night (When is it going to hit my town? Tomorrow or next week? The Mythical Man-Month The Mythical Man-Month: Essays on Software Engineering is a book on software engineering and project management by Fred Brooks, whose central theme is that "adding manpower to a late software project makes it later". This idea is known as Brooks' law, and is presented along with the second-system effect and advocacy of prototyping. Brooks' observations are based on his experiences at IBM while managing the development of OS/360. He had added more programmers to a project falling behind schedule, a decision that he would later conclude had, counter-intuitively, delayed the project even further. He also made the mistake of asserting that one project — writing an ALGOL compiler — would require six months, regardless of the number of workers involved (it required longer). Ideas presented[edit]