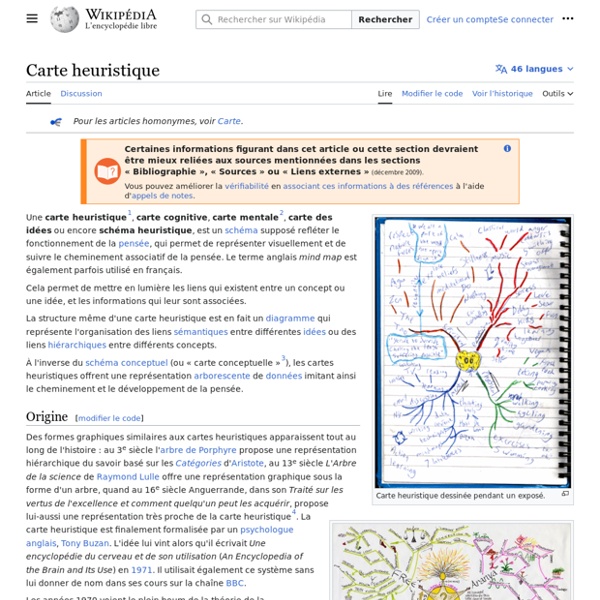 Apprendre à utiliser GanttProject GanttProject is a free software, to model in the form of Gantt planning of the different tasks that are needed for a project. Each task can be defined by its duration and the resources that can be assigned. You can also obtain documents such as PERT and the critical path. Project management software are typically used to automate backup tasks and time management. Viewing a Gantt chart allows by a simple graphic pattern to know who is doing what by giving the status of the project, each task and subtask to have overall planning and load work teams. The resulting graphs can be printed or saved in various formats (HTML, PDF, or images), you will also have the possibility to export the data to a spreadsheet, allowing you to give different tasks to individuals.

List of concept mapping and mind mapping software Concept-mapping and mind-mapping software are used to create diagrams of relationships between concepts, ideas or other pieces of information. It has been suggested that the mind mapping technique can improve learning/study efficiency up to 15% over conventional note taking.[1] There are a number of software packages and websites that allow the creation of, or otherwise support mind maps. File format[edit] Using a standard file format allows interchange of files between various programs.

Visual Thinking Evolution A mind map is a diagram used to represent words, ideas, tasks, or other items linked to and arranged around a central key word or idea. Especially in British English, the terms spidergram and spidergraph are more common,[1] but they can cause confusion with the term spider diagram used in mathematics and logic. Mind maps are used to generate, visualize, structure, and classify ideas, and as an aid to studying and organizing information, solving problems, making decisions, and writing.

Application programming interface Set of subroutine definitions, protocols, and tools for building software and applications More recently, the term has been often used to refer to a specific kind of interface between a client and a server, which has been described as a “contract” between both - such that if the client makes a request in a specific format, it will always get a response in a specific format or initiate a defined action.[1] This is a specialized form of API, sometimes defined as a WEB API. Purpose[edit] Usage[edit] Libraries and frameworks[edit] A single API can have multiple implementations (or none, being abstract) in the form of different libraries that share the same programming interface.

Carte.html <table width=90% cellpadding=10><tr><td bgcolor=ff4447><span><h1>WARNING:</h1><b>JavaScript is turned OFF. None of the links on this concept map will <br />work until it is reactivated. <p><a href=" If you need help turning JavaScript On, click here. The Best 8 Project Management Apps Project management doesn’t need to be a complicated thing, not if you have apps that make things a whole lot simpler. When you have project management apps, you can take care of your team, tasks and deadlines, without even being in the office. You don’t even have to spend a lot of money to get most of the apps you might need. Here are our top picks. 1. Casual

Mind map Hand-drawn and computer-drawn variations of a mind map. A mind map is a diagram used to visually outline information. A mind map is often created around a single word or text, placed in the center, to which associated ideas, words and concepts are added. Major categories radiate from a central node, and lesser categories are sub-branches of larger branches.[1] Categories can represent words, ideas, tasks, or other items related to a central key word or idea.

How & Why to Build a Basic Gantt Chart for Almost Any Project [Estimated read time: 13 minutes] I had planned on writing about losslessness, about accurate reproduction. I’ve always found it strange that at just about the same time that true losslessness became widely available cheaply, we suddenly seemed to care less about fidelity than ever before.