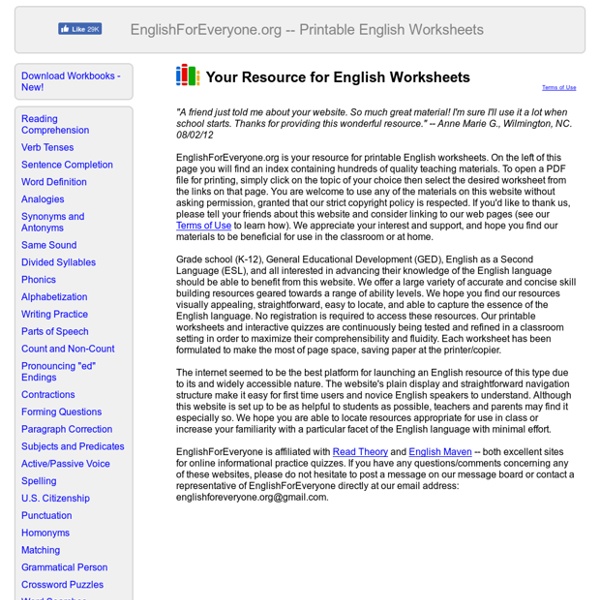 "A friend just told me about your website. So much great material! I'm sure I'll use it a lot when school starts. Thanks for providing this wonderful resource." -- Anne Marie G., Wilmington, NC. 08/02/12 EnglishForEveryone.org is your resource for printable English worksheets. On the left of this page you will find an index containing hundreds of quality teaching materials.

Listen to English and learn English with podcasts in English ► Level 1 For elementary and pre-intermediate students ► Level 2 For intermediate students ► Level 3 Trump recorded having extremely lewd conversation about women in 2005 In this video from 2005, Donald Trump prepares for an appearance on “Days of Our Lives” with actress Arianne Zucker. He is accompanied to the set by “Access Hollywood” host Billy Bush. The Post has edited this video for length. (Obtained by The Washington Post) Donald Trump bragged in vulgar terms about kissing, groping and trying to have sex with women during a 2005 conversation caught on a hot microphone, saying that “when you’re a star, they let you do it,” according to a video obtained by The Washington Post. The video captures Trump talking with Billy Bush, then of “Access Hollywood,” on a bus with the show’s name written across the side.

Drunk, violent, promiscuous... a U.S. view of British youth as seen on the cover of Time Magazine By EMILY ANDREWS Last updated at 10:20 29 March 2008 British youth are violent, drunken and out of control, a leading American magazine concludes today. The front cover of renowned publication Time Magazine depicts a young man in a "hoodie" with mugshots of others across a Union Jack. Its headline reads: "Unhappy, Unloved and Out of Control - An epidemic of violence, crime and drunkenness has made Britain scared of its young." It also pours scorn upon the parenting abilities of the British, claiming they do not spend enough time with their children and cannot cope.

The full transcript of Michelle Obama's powerful New Hampshire speech My goodness! You guys are fired up! Well, let me just say hello everyone. I am so thrilled to be here with you all today in New Hampshire. This is like home to me, and this day – thank you for a beautiful fall day. You just ordered this day up for me, didn’t you?

Film: The Proposal Romantic comedies are not my favorite kind of movie, but they usually have great scenes for grammar. This one is no exception. I think this is one of the funniest scenes involving dogs that I have ever seen. I used it to practice contrasting the past perfect and the past perfect continuous tenses. A. Job Application English Vocabulary Word Lists with Games, Puzzles and Quizzes English Vocabulary Word List addressageapplyarea codebirthdaycertificationchildrencitizenshipcitycollegecountrycriminal recorddatedate of birthdependentsdiplomadivorced educationeducational backgroundelementary schoolemployeeemployerexperiencefamily namefelony recordfemalefiredfirst namegendergraduate schoolhandicaphearingheighthigh school

No, It’s Not Arbitrary and Does Make Sense: Teaching the English Punctuation System You might also try putting a period at the end of a “thought.” And what about semi-colons and colons? Well…maybe those are for exceptionally long breaths and thoughts? Okay, I guess you can see that these are no official “Strunk and White” rules about usage but rather the kind of myths about standard punctuation that are perpetuated, sometimes by educators, I’m afraid. Add to this the concern that writers, such as novelist and poets, often employ their own creative punctuation: for example, poet e.e. cummings wrote in all lower-case; popular novelist Stephen King, a former English teacher, writes long, run-on sentences to indicate stream-of-consciousness thought.