I Don't Know What to Do With Good White People. Leaving Facebook... Resources For White Parents On Talking To Kids About White Supremacy and Racism. In the wake of the continued epidemic of white supremacist violence against Black and brown people in this country, it needs to be on us, as white people, to stop it. 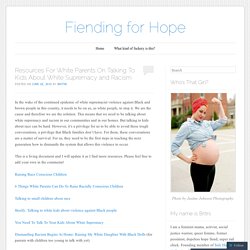 We are the cause and therefore we are the solution. This means that we need to be talking about white supremacy and racism in our communities and in our homes. But talking to kids about race can be hard. However, it’s a privilege for us to be able to avoid these tough conversations, a privilege that Black families don’t have. For them, these conversations are a matter of survival. This is a living document and I will update it as I find more resources. Raising Race Conscious Children 6 Things White Parents Can Do To Raise Racially Conscious Children Talking to small children about race Storify: Talking to white kids about violence against Black people You Need To Talk To Your Kids About White Supremacy How To Teach Your White Kids To Fight Racism.

No White Tears: A Non-Guide on Dealing with Microaggressions from Your White Partner. Hello, shining stars of the galaxy, I hope you’re all feeling cared for today. 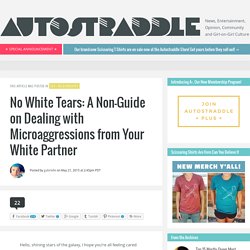 The protests and rallies in Baltimore, Philadelphia and across the country – due currently to the murders of Freddie Gray and London Chanel but the list of names is long and never-ending – have many of us feeling pushed to our emotional and cognitive limits. Many of us are afraid for our lives and the lives of our people. Black Lives Matter now and forever. I write these words so that we don’t forget the state of our nation even in the midst of writing articles about love and relationships. Everything is connected. We do not write in a vacuum. Teaching While White. Editor's Note: This blog was co-written by Molly Tansey and Melissa Katz and originally published on April 15, 2015, by the Young Teachers Collective. 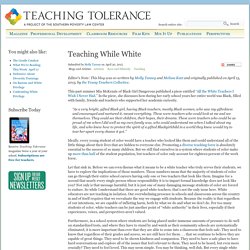 This past summer Mia McKenzie of Black Girl Dangerous published a piece entitled “All the White Teachers I Wish I Never Had.” The Womansplainer. A Rap on Race: Margaret Mead and James Baldwin’s Rare Conversation on Forgiveness and the Difference Between Guilt and Responsibility. By Maria Popova “We’ve got to be as clear-headed about human beings as possible, because we are still each other’s only hope.” 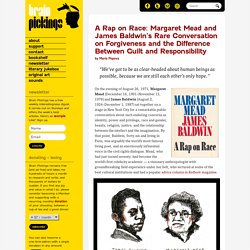 On the evening of August 26, 1971, Margaret Mead (December 16, 1901–November 15, 1978) and James Baldwin (August 2, 1924–December 1, 1987) sat together on a stage in New York City for a remarkable public conversation about such enduring concerns as identity, power and privilege, race and gender, beauty, religion, justice, and the relationship between the intellect and the imagination. This Poet Created An Incredible Tribute for All The Girls with "Ghetto" Names. Here’s the History Behind the Term “Women of Color” I mean. I'm Not Your Feminist Mommy & I'm Tired of Holding Your Hand. #EndFathersDay: Trolls being trolls, or “black propaganda” designed to tear apart feminism? Not actual feminist You all got the memo about #EndFathersDay fiasco, right – the phony “feminist” hashtag, seeded and spread by 4chan trolls, that aroused so much consternation on Twitter the other day, and that took in so many who’re already given to thinking the worst about feminism? 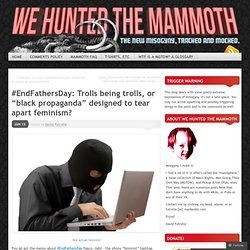 It would be nice if we could just dismiss this whole thing as trolls being trolls – no harm, no foul. But there’s a bit more to it than that. For one thing, the troll campaign worked. At least on some people: While feminist writers quickly rushed in to point out that the whole thing was an antifeminist hoax, more than a few in the right-wing media were taken in utterly. On the National Review Online, Molly Wharton warned that “Twitter anti-fatherists” were taking aim at a holiday that they said “glorifies rape, patriarchy, and child abuse.” On Fox News’ Fox & Friends, antifeminist author and “Princeton Mom” Susan Patton went further: The evidence?

Polyamorous Pansexual Otherkin (faerie), Marxist Misandrist. MY FEMINISM WILL BE INTERSECTIONAL OR IT WILL BE BULLSHIT! Now picture this: me screaming the above. 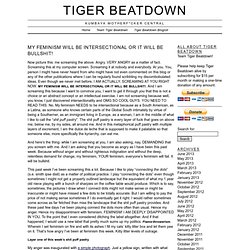 Angry. VERY ANGRY as a matter of fact. Screaming this at my computer screen. Screaming it at nobody and everybody. At you. Kimberlé Crenshaw on intersectionality: “I wanted to come up with an everyday metaphor that anyone could use” Kimberlé Crenshaw’s ears must have been burning with alarming regularity and intensity over the last couple of years. 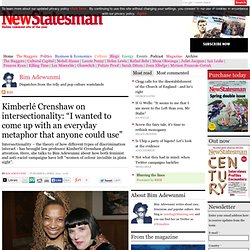 We meet in one of the dining rooms of her hotel in central London, her base while she’s on a whistlestop lecture tour. Two days before our meeting she spoke at the School of Oriental and African Studies, and later this evening, she will speak at the London School of Economics. Her subject is intersectionality and feminism. In recent times, intersectionality theory – the study of how different power structures interact in the lives of minorities, specifically black women, a theory she named in the 1980s – has enjoyed a resurgence in popular and academic feminism. Gaywitchesforabortions.tumblr. How Do You Practice Intersectionalism? An Interview with bell hooks. This interview was conducted by Randy Lowens, the pen name of Don Jennings, who passed away March 8, 2012, in Richmond, Kentucky. 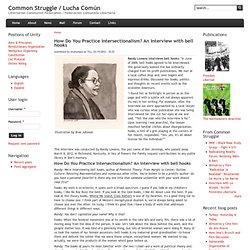 In lieu of flowers the Family request contributions to any public library in Don’s memory. Randy: We're interviewing bell hooks, author of Feminist Theory: From Margin to Center; Outlaw Culture: Resisting Representations and numerous other titles. You're known to be a prolific author: do you have a personal favorite? Is there any one title that someone unfamiliar with your work should read first? Hooks: My work is so eclectic; it spans such a broad spectrum. Randy: You don't capitalize your name? Hooks: When the feminist movement was at its zenith in the late 60's and early 70's, there was a lot of moving away from the idea of the person. Randy: The books of yours I'm most familiar with—the two I cited—are a work of political theory and, the other, a work of cultural criticism.

Randy: You mentioned your children's books.