The Best Keyboard Shortcuts in Default Windows Programs. Every good program makes use of keyboard shortcuts. 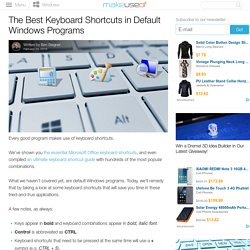 How to Print Labels with Mail Merge in Microsoft Word and Excel. Mail Merge can save you time and effort, so learn the process from start to finish with this guide. 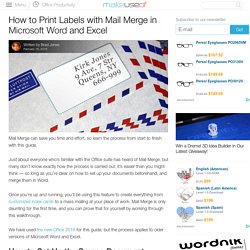 Just about everyone who’s familiar with the Office suite has heard of Mail Merge, but many don’t know exactly how the process is carried out. It’s easier than you might think — so long as you’re clear on how to set up your documents beforehand, and merge them in Word. Once you’re up and running, you’ll be using this feature to create everything from customized index cards to a mass mailing at your place of work. Mail Merge is only daunting for the first time, and you can prove that for yourself by working through this walkthrough.

We have used the new Office 2016 for this guide, but the process applies to older versions of Microsoft Word and Excel. How to Post to the SharePoint Newsfeed - BetterCloud Monitor. You can include a lot more in a newsfeed post than just text, though it’s not immediately obvious how. 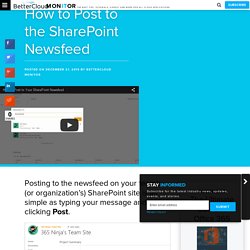 The video above provides a walk-through of each of the examples below. Free online Office resources to raise your game. One of the best things about Microsoft Office is its abundance of free online resources. 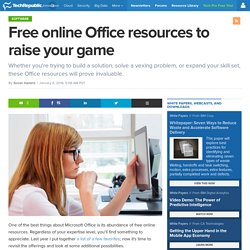 Regardless of your expertise level, you'll find something to appreciate. Last year I put together a list of a few favorites; now it's time to revisit the offerings and look at some additional possibilities. Office Dev Center Kick off the New Year off by learning about Office 2016 and Office 365. The latter offers new development opportunities across many 365-compatible platforms, and Microsoft's support site is the best place to start. Peltier Tech Blog Jon Peltier is tops in the industry for supporting Excel. FMS has been supporting Access for years. HowTo-Outlook. 8 Surprising Windows Notepad Tricks You Must Know. We can all agree that the Windows Notepad is basic and usually gets shunted out in favor of feature-filled alternatives. 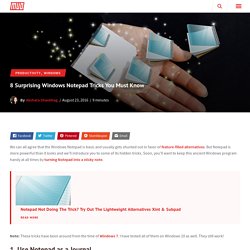 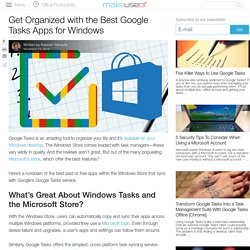 The Windows Store comes loaded with task managers—these vary wildly in quality. And the reviews aren’t great. But out of the many populating Microsoft’s store, which offer the best features? Here’s a rundown of the best paid or free apps within the Windows Store that sync with Google’s Google Tasks service. 4 Simple Ways to Reset Your Windows Admin Password. Forgetting or losing your password is never a pleasant experience — especially when its the password to the administrator account on your Windows PC. 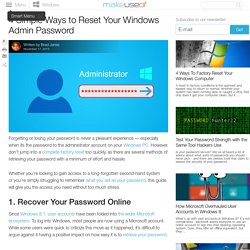 However, don’t jump into a complete factory reset too quickly, as there are several methods of retrieving your password with a minimum of effort and hassle. 25+ Outlook Keyboard Shortcuts to Make You More Productive. Outlook is one of the most popular desktop email clients in use today, and if you’re one of those many Outlook users, the following keyboard shortcuts are sure to save you lots of time. 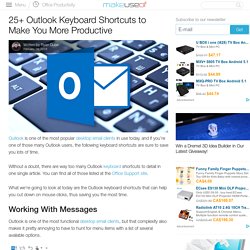 Without a doubt, there are way too many Outlook keyboard shortcuts to detail in one single article. You can find all of those listed at the Office Support site. 10 Quick Tips to Get Better at Outlook. Outlook is one of the most popular email clients, but you might not be using it to its full potential. 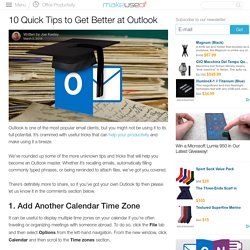 It’s crammed with useful tricks that can help your productivity and make using it a breeze. We’ve rounded up some of the more unknown tips and tricks that will help you become an Outlook master. Whether it’s recalling emails, automatically filling commonly typed phrases, or being reminded to attach files, we’ve got you covered. There’s definitely more to share, so if you’ve got your own Outlook tip then please let us know it in the comments section below. 1. 60 Essential Microsoft Office Keyboard Shortcuts for Word, Excel, and PowerPoint. Keyboard shortcuts are a great productivity technique, and any computer user should have the most important ones memorized. 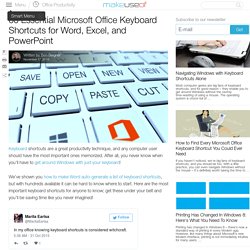 After all, you never know when you’ll have to get around Windows with just your keyboard! We’ve shown you how to make Word auto-generate a list of keyboard shortcuts, but with hundreds available it can be hard to know where to start. Here are the most important keyboard shortcuts for anyone to know; get these under your belt and you’ll be saving time like you never imagined! A few notes: How to Automate Microsoft Office Tasks with IFTTT Recipes. A superb batch of Microsoft Office recipes recently appeared on the site of serial web-service linkers, IFTTT. The recipes, developed by Microsoft with the aid of IFTTT, focus on connecting Microsoft Office services to, well, everything else on the web. And they haven’t skimped on the recipes either, now with over 50 working connections and more set to arrive. We’ll take a quick look at eight of the best Microsoft Office connections from the ever-expanding IFTTT recipe book. What is IFTTT? IFTTT is an abbreviation of “If This Then That,” and is pronounced like “gift” but without the “g.”

The Microsoft Office IFTTT Channel. Printing to PDF on Windows Is Now Easier Than Ever. In Windows 7 and 8.1, there was no native way to print to PDF. You could get around it by installing some third-party tools, but that was quite inconvenient. But with Windows 10, that’s all changed. Printing to PDF in Windows 10 Take any document and open it in any text editor or processor. Navigate to File > Print, choose Microsoft Print to PDF from the Printer dropdown, and click Print. Do note that the print to PDF functionality works in any application that supports printing. Take advantage of the Group by command in Windows 10's File Explorer. In previous articles, "Get to know File Explorer's Ribbon toolbar in Windows 10" and "Get to know File Explorer's Contextual tabs in Windows 10," I told you that the Ribbon toolbar system with its Core and Contextual tabs is designed to expose close to 200 different file management commands in File Explorer.

One of these commands is called Group by, and it's found on the View tab. If you're like most users, you probably aren't taking advantage of the power that this command provides when it comes to sorting through the various files folders and other objects that you can display in File Explorer. 8 Things You Can Do in Office That You Never Thought Of. Microsoft Office 2013 takes itself too seriously. Relly. Earlier versions of the productivity suite had Easter eggs galore and no boss in the world could prevent you from wiling away for a few minutes. The Trustworthy Computing initiative sucked the fun out. Microsoft has sobered up. HowTo set mailtips in Exchange 2010 ? Step-by-Step & Advanced.

Exchange 2010 brings a new feature that displays an info message when the user wants to send an e-mail. This is very useful for restricted e-mail addresses / unmonitored mailboxes / slow-response users or to alert the user that the message size exceeds senders send list / when sending e-mail to large number of recipients / sending e-mails to invalid domains / and more. You can set a mailtip for: – mailbox – distribution group – dynamic distribution group - mail contact – mail enabled folder In our first example I am going to show you how to set an mailtip for a single mailbox: 1.

Microsoft Word. Microsoft Access. Microsoft Excel. Microsoft OneNote. OneDrive. Office training. 5 Ways to Strip the Formatting When You Copy & Paste Text. Copying and pasting are probably some of the most common functions you perform on your computer. How to Troubleshoot If Windows 8.1 Apps Won't Open or Install. The Windows 8.1 upgrade created several issues for many users, myself included. One problem was Windows Apps becoming unresponsive, not opening or not even installing. This included PC Settings and the Windows App Store. Users have reported various symptoms, but the most common was the app “flashing” open and then immediately closing. The app remained “open”, but would never load past the initial “flash screen”. Some have even reported error messages saying the app can’t open. The following are the steps I took to solve my problem. Manage Start Screen Tiles & Modern Apps Like A Pro. The Windows 8.1 update brought a host of great changes to the modern interface, allowing you to more easily customize your Start Screen and organize your modern apps.

Windows Defender: 7 Things You Must Know About Microsoft's Antivirus Solution. While novel Windows 10 features are promising, including improved security and a complete revamp of Internet Explorer, those of us still on Windows 8 have our own security concerns to worry about. MSDN Blogs. Fastest Ways to Transfer Files Between PCs and Mobile Devices. Office Q&A: A confusing Word control and a simple Excel conditional formatting rule. Some readers require professional Office developers because their needs are more complex than I can handle in a brief question-and-answer session. When this happens, I'm glad to help put readers and developers together. However, most questions come from people who can do their own work but need a little guidance. This month, I discussed a confusing control behavior with Karen; I couldn't give her a solution, just information. Obie received a simple conditional formatting solution. I'm using Office 2013 on a Windows 7 system.