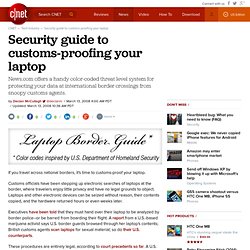 Customs officials have been stepping up electronic searches of laptops at the border, where travelers enjoy little privacy and have no legal grounds to object. Laptops and other electronic devices can be seized without reason, their contents copied, and the hardware returned hours or even weeks later. Investigatory Powers Act UK. Warantless cellphone search in CA. US DHS revises border laptop search rules. IDG News Service - The U.S. 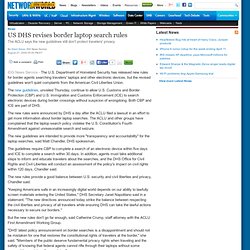 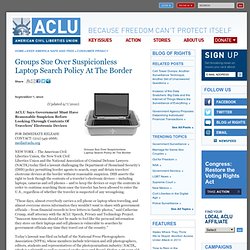 The Privacy of Your Laptop at International Borders. The blogosphere has been bubbling over the past few weeks over the subject of laptop searches and seizures at international borders. 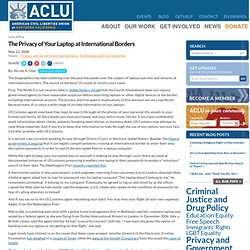 The source of the buzz? A couple of recent court cases. First, The Ninth Circuit recently held in United States v. Arnold that the Fourth Amendment does not require government agents to have reasonable suspicion before searching laptops or other digital devices at the border, including international airports. The privacy and free speech implications of this decision are very significant because many of us store a wide range of private information on our laptops. US Customs agents now have free reign to search through all the photos of your personal life, emails to your friends and family, all the e-books you have purchased, and your entire music library. In a second case currently working its way through District Court in Vermont, United States v. And if you say no to the US Customs agent requesting your data? How to Secure Your Laptop Before Crossing the Border. By Luigi Benetton Here’s what you need to know about data searches at he United States border, and how you can protect sensitive data. 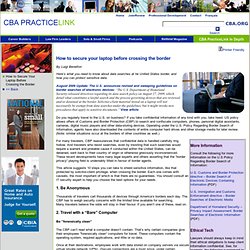 August 2009 Update: The U.S. announces revised and sweeping guidelines on border searches of electronic devices: “The U.S. Department of Homeland Security released directives regarding its data search policy on August 27, 2009, which detail what constitutes a lawful search and the process governing devices that are reviewed and/or detained at the border. Solicitor-client material stored on a laptop will not necessarily be exempt from data searches under the guidelines, but it might invoke new procedures that apply to sensitive documents.” View article Do you regularly travel to the U.S. on business? For many travelers, CBP reassurances that confidential data is handled carefully ring hollow. This article suggests 10 steps you can take to shield sensitive information, like that protected by solicitor-client privilege, when crossing the border.

Grad Student Challenges Border Laptop Searches - Hit &amp; Run. One of the great thrills of international travel is that frisson of Cold War nostalgia we feel upon return, as we line up for readmittance to our own country, just feet from the welcoming embrace of Bill of Rights protections that end, by mandate of a clause located somewhere in the Constitution, at a fifteen-foot distance from anybody wearing a Customs and Border Protection Uniform. 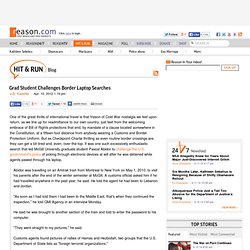 But as Checkpoint-Charlie thrilling as even routine border crossings are, they can get a bit tired and, even, over-the-top. It was one such excessively enthusiastic search that led McGill University graduate student Pascal Abidor to challenge the U.S. government's policy of poking through electronic devices at will after he was detained while agents pawed through his laptop. Abidor was travelling on an Amtrak train from Montreal to New York on May 1, 2010, to visit his parents after the end of the winter semester at McGill. ACLU Sues Over Laptop Border Searches. An Obama administration policy allowing U.S. border officials to seize and search laptops, smartphones and other electronic devices for any reason was challenged as unconstitutional in federal court Tuesday.

Citing the government’s own figures , the American Civil Liberties Union and the National Association of Criminal Defense Lawyers claim about 6,500 persons had their electronic devices searched along the U.S. border since October 2008. In one instance, according to the lawsuit filed in New York, a computer laptop was seized from a New York man at the Canadian border and not returned for 11 days. Forcing Defendant to Decrypt Hard Drives Is Unconstitutional, Appeals Court Rules. Forcing a criminal suspect to decrypt hard drives so their contents can be used by prosecutors is a breach of the Fifth Amendment right against compelled self-incrimination, a federal appeals court ruled Thursday. 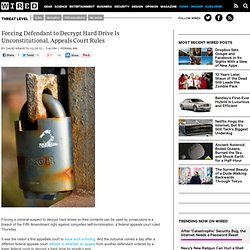 It was the nation’s first appellate court to issue such a finding. And the outcome comes a day after a different federal appeals court refused to entertain an appeal from another defendant ordered by a lower federal court to decrypt a hard drive by month’s end. Thursday’s decision by the 11th U.S. Circuit Court of Appeals said that an encrypted hard drive is akin to a combination to a safe, and is off limits, because compelling the unlocking of either of them is the equivalent of forcing testimony.

The case at hand concerns an unidentified “Doe” defendant believed to be in possession of child pornography on 5 terabytes of data on several drives and laptops seized in a California motel with valid court warrants. 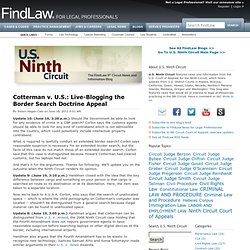 Should the Government be able to look for any evidence of crime in a CBP search? Corbin says the customs agents should be able to look for any kind of contraband which is not admissible into the country, which could potentially include intellectual property contraband. Answers Your Questions About Border Searches. Protecting Your Privacy at International Borders. This WEEK in LAW 128.