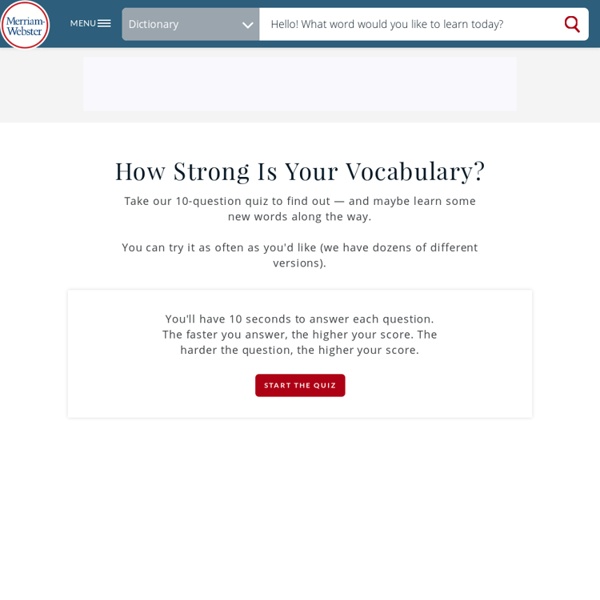 Access More Than 1,000 Socrative Quizzes Sorted by Subject One of the nice administrative aspects of Socrative is the ability to share quizzes with colleagues and import quizzes that are shared with you. This morning on the Socrative Facebook page I found their massive spreadsheet of more than 1,000 shared quizzes. The spreadsheet is arranged by subject and grade level. Portrait of an ESFJ As an ESFJ, your primary mode of living is focused externally, where you deal with things according to how you feel about them, or how they fit in with your personal value system. Your secondary mode is internal, where you take things in via your five senses in a literal, concrete fashion. ESFJs are people persons - they love people. They are warmly interested in others. They use their Sensing and Judging characteristics to gather specific, detailed information about others, and turn this information into supportive judgments. They want to like people, and have a special skill at bringing out the best in others.

The Internet Guide to Jazz Age Slang Below you will find an alphabetical listing of slang words used in the "Jazz Age" (generally taken to mean the years of the Roaring Twenties and the Great Depression). The Jazz Age was the first modern era to emphasize youth culture over the tastes of the older generations; the flapper sub-culture had a tremendous influence on main stream America--many new words and phrases were coined by these liberated women. These are the most common words and phrases of the time, many of which you may be surprised to note are still very much in use today! Some entries were the exclusive domain of students (or rather, those of student age; only a very small percentage of the population attended college) or flappers and have been indicated as such with italicized monikers. Also, the words that emerged in a particular year are noted appropriately. Note: the majority of the entries were gleaned from a great slang dictionary called Flappers 2 Rappers, written by Tom Dalzell (Merriam-Webster, 1996).

Gen Y’s New Words for 2009 NEW SLANG From povo and myselfish to retox and kward, the terms to know for 2009 While we understand the fleeting nature of slang and promise we are not “trying to make ‘fetch’ happen,” each year ushers in a bevy of new words you might hear and may even want to use (though we urge you to do so sparingly). 2009 introduces us to a vocabulary inspired by pop culture and technology, and here are a few of the favorites heard from the streets, our bloggers, and Gen Ys who know… RECESSION-INSPIRED SLANG Povo (po-vo) “Caroline, I can’t go out to dinner tonight: My pay cut has left me totally povo.” Ex-hole n. Your ex boyfriend/girlfriend who dumped you via Post-it/text/drop-off-the-face-of-the-earth-disappearing-act and who is now flouncing around town with a new love interest “I bumped into my ex-hole this morning – she said she was so sorry that she cheated on me, blah blah blah.

About Us - CallerSmart We're a merry band of pirates Brian is the brains behind CallerSmart as well as the head of marketing. He loves green tea ice cream. Maciej leads our personnel group. He loves vanilla ice cream with a few slices of banana topped with a bit of chocolate & whipped cream (sweet tooth!). Amusing, but kind of weird quotes... A Freudian slip is when you say one thing but mean your mother. What is a committee? A group of the unwilling, picked from the unfit, to do the unnecessary. -- Richard Harkness, The New York Times, 1960 Gen-Y Slang Lexicon of Gen-XY vernacular, by Lexicon. fly-describes something that is good, like a girl that looks sexy or a car that looks good. dope- new word for cool. money- similar to fly, only more so. Can be applied more universally. betty-same as babe or chic, only more respectful.