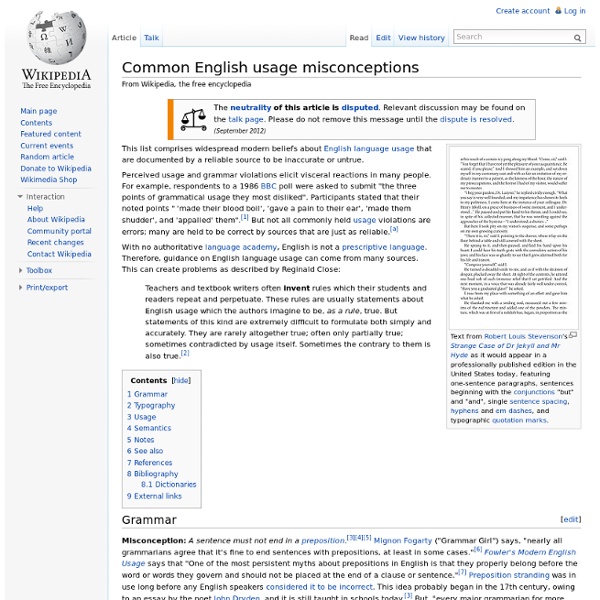 Writing Dialect Most people assume that dialect has to be a part of dialogue. My answer is that it can be, and in certain circumstances it ought to be, but the writer must never feel compelled to duplicate dialects simply for the sake of “authenticity.” The writer who thinks she is writing dialect because she is clipping the ends off of words and stretching out others is often taking delight more in her own experimentation than in any real sense of story. She may be shooting for a folksy charm or for a root authenticity, but most often she fails miserably. Try all you want to make the words unrecognizable—misspell them, cut them in half, throw in a fistful of apostrophes, sound out every groan the character makes—but the truth is, they are still words you’re dealing with. Consider this example. —By Tom Chiarella Two grandmothers sit on a porch in Tennessee; one of them is trying to convince the other to go into town to get a pie from the grocery store to serve at dinner the next day: But wait. Sit down.

Citing Yourself - Citations - Academic Guides at Center for Student Success If you cite or quote your previous work, treat yourself as the author and your own previous course work as an unpublished paper, as shown in the APA publication manual. For example, if Marie Briggs wanted to cite a paper she wrote at Walden in 2012, her in-text citation might look like this: Briggs (2012) asserted that previous literature on the psychology of tightrope walkers was faulty in that it "presumed that risk-taking behaviors align neatly with certain personality traits or disorders" (p. 4). And in the reference list: Briggs, M. (2012). If your original work contained citations from other sources, you will need to include those same citations in the new work as well, per APA. According to Briggs (2012), recent psychologists such as "Presley and Johnson (2009) too quickly attributed risk-taking to genetic factors, ignoring the social family issues that often influence the decision to explore pursuits such as tightrope walking" (p. 5).

Words and Phrases That Rob Your Writing of its Power You’re not stupid. You know what writing is truly about. It’s a never-ending battle for your readers’ attention. Every sentence is a link in a taut chain that connects your headline to your conclusion. And you are just one weak sentence away from losing your reader forever. So you take your craft quite seriously. You ignore all but your best ideas. You work on each piece of writing for exactly as long as necessary to get it right. And you edit until your words are crisp and clear. But what if that isn’t enough? What if weaknesses remain that are almost impossible to spot? The Subtle Attention Killers That Hide in Plain Sight No matter how carefully you scrutinize your writing, subtle problems will remain. Certain words and phrases are so commonplace – and so seemingly benign – that they glide unnoticed under your editing radar. But these words and phrases can silently erode your reader’s attention. They don’t stand out. But they weaken your writing and dilute your ideas. So bookmark this post.

5 Ways to Get Rid of Your Damn Empty Modifiers I discussed the need to get rid of empty emphatics when I gave you 8 words to seek and destroy in your writing, but just saying that you should get rid of a thing doesn't say much about the right way to do so. Today I'm going to show you a few of my favorite ways to get rid of your empty modifiers. What exactly is an empty modifier? It's any word whose only role is to intensify the word it's modifying. The prime candidates here are "very" and "really," but "extremely," "intensely," "totally," "absolutely," "quite," and many other emphatic modifiers make the list. Further, many emphatics that shift meaning slightly or add some flavor (e.g., "just" or "damn") should be approached with skepticism, and it's easy to find flimsy "-ly" words that show us why the road to hell is paved with adverbs. I'm not saying that empty modifiers should never be used. 1. Sylvia was very crazy. This is the easiest and often the best solution. 2. Bob was really ugly hideous. 3. Shane was really tall. 4. 5.

Street Drug Slang Free English Grammar Lessons and Tests Slang APA Formatting and Style Guide Summary: APA (American Psychological Association) style is most commonly used to cite sources within the social sciences. This resource, revised according to the 6th edition, second printing of the APA manual, offers examples for the general format of APA research papers, in-text citations, endnotes/footnotes, and the reference page. For more information, please consult the Publication Manual of the American Psychological Association, (6th ed., 2nd printing). Contributors:Joshua M. Please use the example at the bottom of this page to cite the Purdue OWL in APA. To see a side-by-side comparison of the three most widely used citation styles, including a chart of all APA citation guidelines, see the Citation Style Chart. You can also watch our APA vidcast series on the Purdue OWL YouTube Channel. General APA Guidelines Your essay should be typed, double-spaced on standard-sized paper (8.5" x 11") with 1" margins on all sides. Major Paper Sections Title Page Running head: TITLE OF YOUR PAPER

Common Grammar and Spelling Mistakes As midterms approach, many students are preparing for their first essays of the semester. By college, you should be able to write an effective essay, but we often make the same grammatical and spelling mistakes over and over again. I have no doubt you can use two/too/to and there/they're/their correctly by now, but here are some more advanced common grammatical and spelling errors that make you look silly, both in your writing and speaking. Note: All of these definitions are my re-wordings of dictionaries and grammars. Then/Than: Although a common error in writing, this is a very grammar problem to solve.

How to Cite Something You Found on a Website in APA Style by Chelsea Lee Perhaps the most common question we get about APA Style is “How do I cite a website?” or “How do I cite something I found on a website?” First, to cite a website in general, but not a specific document on that website, see this FAQ. Once you’re at the level of citing a particular page or document, the key to writing the reference list entry is to determine what kind of content the page has. What seems to flummox our readers is what to do when the content doesn’t fall into an easily defined area. Content in that egg white area may seem confusing to cite, but the template for references from this area is actually very simple, with only four pieces (author, date, title, and source): That format description in brackets is used only when the format is something out of the ordinary, such as a blog post or lecture notes; otherwise, it's not necessary. Examples of Online References Here’s an example where no author is identified in this online news article: