The Yiddish Handbook: 40 Words You Should Know 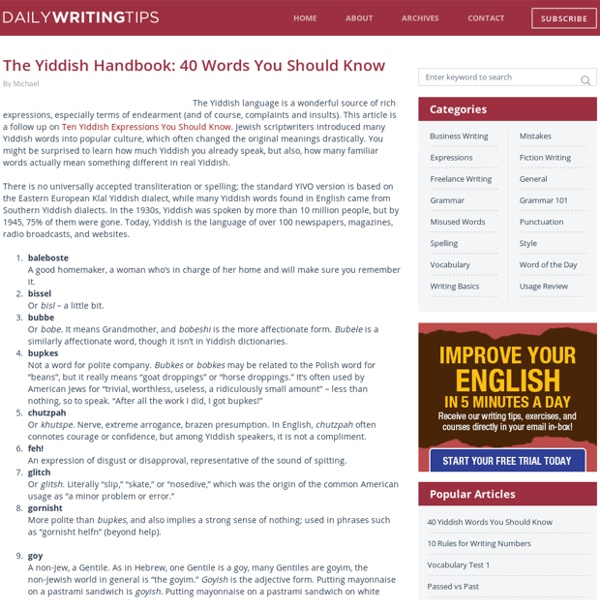 Sheri Jo Fantastic post! I grew up in a town with many, many Jewish people and Yiddish sayings are 2nd nature to me. However, the town I have lived in for the past 15 years has a very small Jewish population in comparison. Consequently, whenever I use a Yiddish term, the response is either hysterical laughter or the “DAHHH… shmendrik” look.

Examples of Japanese Onomatopoeia From longtime reader K (who also contributed the awesome screenshots that made up the Goldmine of Engrish), I’ve received a huge list of Japanese Onomatopoeic words and their corresponding meanings. Whether or not you’re into Japanese, it’s very interesting to see how sounds change between languages, and what two languages are further apart than English and Japanese? For example, frogs say “gero gero” instead of “ribbit”, and dogs bark “wan wan”. These words all come from indexes in the back of the English translation of an old manga (Japanese comic book) from the nineties, called “Fushigi Yuugi” (“Mysterious Play”). At K’s insistence, I’ve watched a couple episodes of the anime, and it’s pretty good Japanese practice because the characters seem to speak pretty rapidly, it feels really good hearing them rattle off a long sentence and understanding exactly what it means. Here are the words, arranged into alphabetical order!!

Dragon Writing Prompts :: Character traits :: September :: 2007 Here’s an extensive list of character traits. You can pick a couple or three to form the basis of a character. Then create a character with the opposite traits to form a friend, enemy, sibling, mentor … ? While there’s a great deal to be said about nature forming our characters, it’s a lot more interesting for a story if there’s a background reason! Pick all from one list or all from different lists or mix them up and choose completely randomly. If you love lists, there’s another list: Raymond Cattell’s 16 Personality Factors . Positive traits Depends on the context whether they’re positive or negative Generally negative descriptors, but not aspects that make you want to keep your distance Quite negative, people you want to have as little contact with as possible Pretty darn evil Abusive Cruel Dishonest Hateful Inhumane Masochistic Psychopathic Psychotic Ruthless Sadistic Traitorous Tyrannical Vengeful Wicked

Personality Traits, Character traits, Human Traits, personal characteristics, human qualities, Traits of Human Consciousness, human makeup, personal attitudes, negative attitudes, positive attitudes, list, makeup of the individual human, endowments, consc Several Steps Further: Aside from the listing above, traits of human consciousness can be viewed from a number of other perspectives. Here are several: Traits Organized from Psychological (Inner-oriented) to Social (Outer-oriented) Human personality/character traits can be divided by those that are inner/psychological; and those that are outer-oriented/social. (They can then be further divided positively and negatively.) Traits Expressing in the Vertical Scale of Human Consciousness (Physical, Vital, Mental) The individual human expresses exits at three fundamental planes or levels of being -- mental, vital, and physical. ARTICLE: Positive and Negative Human Traits (from a spiritual perspective) New Fundamental Traits/Capacities that Enable Higher Achievement and Personal Growth Spiritual Traits/Capacities that Enable Vastly Higher Achievement, and Personal Growth Negative Traits/Capacities that Retard Achievement & Personal Growth Personal and Society's Values

List of superhuman features and abilities in fiction Origins Examples of ways in which a character has gained the ability to generate an effect. Methods Examples of methods by which a character generates an effect. Powers Superpower interaction This section refers to the ability to manipulate or otherwise interact with superpowers themselves, not "power" such as electrical power or gravitational power. Personal physical powers Powers which affect an individual's body. Mentality-based abilities The abilities of extra-sensory perception (ESP) and communication. Physical or mental domination Physics or reality manipulation These powers may be manifested by various methods, including: by some method of molecular control; by access to, or partially or fully shifting to another dimension; by manipulating the geometric dimensions of time or space; or by some other unnamed method. Elemental and environmental powers Ability to control or manipulate the elements of nature. Energy manipulation These powers deal with energy generation, conversion and manipulation.

The 7 Commandments All Video Games Should Obey Thou shalt not pad the length of your games. Violators:Mass Effect, The Godfather games, Legend of Zelda: Twilight Princess, Elder Scrolls: Oblivion IV, ah, fuck it. Any open-world game this generation. See, here's the thing. We don't mind short games. Portal was a short game, everybody loved it. What you have started doing instead, game industry, is taking your short game and inventing some arbitrary way to pad the length. Putting huge stretches of land between objectives. Wow, what an awesome sprawling landscape your game inhabits. "We must reach the citadel! It's padding, plain and simple. Adding pointless, mandatory fetch quests. The Metroid Prime series is guilty as hell of this, letting you get near the end before you have to track back across all the old levels and retrieve a bunch of shit. Those games get a little bit of a pass because their repetitive side-quests are optional.

11 Guy Movie Classics (And Why They Secretly Suck) Man, we're putting our heads in the noose here, aren't we? Yep, that's right: against all common sense, we're on the attack for all the classic guy movies littering DVD shelves everywhere. Hey, we know they're classics. But have you actually watched any of these recently? Why It's a Classic Director Tony Scott had his work cut out for him in 1986 trying to convince American audiences that a subject as dull as F-18 fighter jets firing missiles and dogfighting could be cool. Why It Secretly Sucks Watching Top Gun in our contemporary era, where words like "homoerotic subtext" exist, the average viewer will spend half the film wondering when Maverick and Iceman are going to kiss already (right), and the other half wondering what a Danger Zone is, and why being on the highway to it is relevant to the film. Why It's a Classic Wesley Snipes IS Blade, an unstoppable killing machine who enjoys wearing sunglasses and killing vampires in slow motion to thumping techno beats.

5 Authors More Badass Than The Badass Character They Created When you read a story of a manly hero slaying a dragon and then bedding the princess, it's easy to imagine there's a 300-pound author sitting behind the typewriter in a tiny apartment full of cats. After all, fiction is all about escaping our real life, right? Not always. In fact, if you look at the authors behind some of the most iconic heroes of all time, you find a writer who's every bit as badass. Not only did these guys insert elements from their actual lives into the stories, they actually toned them down a bit. We're talking about the creators of characters like... The Character: Even Daniel Craig's portrayal, while much more accurate, failed to express the extent of Bond's badassery. He doesn't need puns to punish you... shit, wait. The Writer: Before he invented Bond, Ian Fleming was personally recruited by the Director of Naval Intelligence to aid them as a spy during World War II. We're assuming it looked something like this. Seriously, now. "Get thee off mine nuts, bitch."