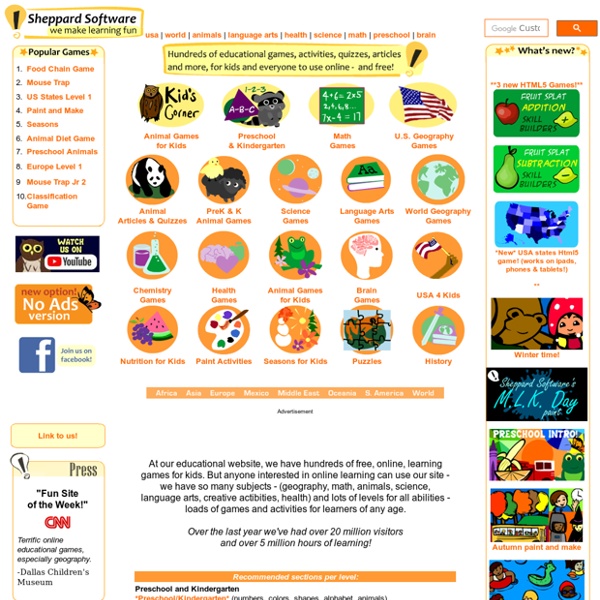 "I stumbled upon your fun interactive geography games from a link on the Massachusetts Geographic Alliance Website. Since then, your games have become quite a hit with my competitive colleagues!" --Candice Gomes, Education Outreach Coordinator, Boston Public Library (Sheppard Software's geography games were featured in the Boston Public Library's 2006 Exhibition on Mapping) "Terrific online educational games, especially geography." --Dallas Children's Museum First, let me say I love your website!

How to Play Crumple & Shoot I learned how to play Crumple and Shoot from Doris Gannon, a reading teacher I worked with in my first job, and since then I’ve passed it on to more people than I can remember. It works with students from elementary school through college, and I’ve never had a group who didn’t eventually beg me to play it. Plus, it’s so easy, you could literally start playing it the minute you finish reading these instructions. The only real requirement is that your students need to be able to write easily, so it might not work as well with very young students. Classic Math » Toy Theater Classic Math Coin Machine Classic Balloon Pop Off Frog Secret Number

Three Geography Games Based on Google Maps and Google Earth One of the things that I emphasize to students before they embark on any kind of research or problem-solving task is to take a good long look at the information that they already have before them. To that end, I'll often request that they construct a list of what they know about a topic or problem before they begin to search. Playing one of the following three Google Maps-based games is a fun way to reinforce the concept of using prior knowledge and observations. Word Dominoes – tekhnologic The other week I wanted an activity that would allow students to have a controlled practice that could be done in small groups, but had a repetitive quality to really practice the target language. I decided on dominoes. Dominoes is another activity that is an old favorite in the ESL classroom.

Game Word Generator - The Game Gal When I was putting together this site of games, I discovered that my printable word lists became very popular. I had word lists for pictionary, charades, and other games, and visitors seemed to really like them! So I got to thinking, what’s one step better than a printable list of words for playing pictionary? An online word generator! Here I’ve taken all the words on my printables, plus hundreds more, and combined them into different categories for playing games like pictionary, catchphrase, charades, or any other game you want. Here’s how it works: First, select a Game (the game menu also includes a Holiday option).

ESL Games and Game Board The ESL game boards found on this page are in the form of Microsoft Word documents. It may take a few second to open. Just click, print, and photocopy.