Networking - How to communicate between two VirtualBox VMs running on same host.

Csmojo. Set up a Server in your VirtualBox in a few simple steps so you can fire it up whenever you need it, or simply use it as a playground for your VPS. 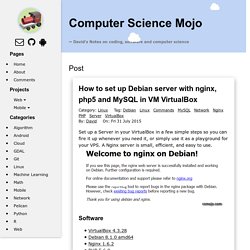 A Nginx server is small, efficient, and easy to use. Software Prerequisites 1. Install Nginx update package list install Nginx 2. For the purpose of this example, we are using Bridged Adapter in VM VirtualBox and 192.168.0.16 as the server address Your Debian virtual machine is mostly on DHCP, and the IP might change.

How to Troubleshoot Nginx Error 414: URI Too Large. While large AJAX requests could be considered a smell, sometimes it might be easier to simply configure nginx so that it handles larger requests than simply slicing the request to and sending a batch of smaller ones. 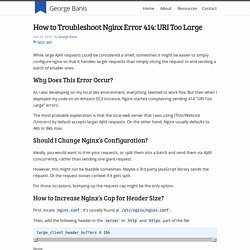 Why Does This Error Occur? As I was developing on my local dev environment, everything seemed to work fine. But then when I deployed my code on an Amazon EC2 instance, Nginx started complaining sending 414 “URI Too Large” errors. The most probable explanation is that the local web server that I was using (Thin/Webrick/Unicorn) by default accepts larger AJAX requests. On the other hand, Nginx usually defaults to 4kb or 8kb max. Should I Change Nginx’s Configuration? Ideally, you would want to trim your requests, or split them into a batch and send them via AJAX concurrently, rather than sending one giant request. However, this might not be feasible sometimes. For those occasions, bumping up the request cap might be the only option.

CENTOS. Apache Tomcat 7 (7.0.72) - Security Manager HOW-TO. The Java SecurityManager is what allows a web browser to run an applet in its own sandbox to prevent untrusted code from accessing files on the local file system, connecting to a host other than the one the applet was loaded from, and so on. 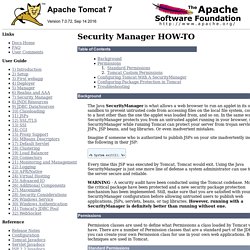 In the same way the SecurityManager protects you from an untrusted applet running in your browser, use of a SecurityManager while running Tomcat can protect your server from trojan servlets, JSPs, JSP beans, and tag libraries. Or even inadvertent mistakes. Imagine if someone who is authorized to publish JSPs on your site inadvertently included the following in their JSP: Every time this JSP was executed by Tomcat, Tomcat would exit. Using the Java SecurityManager is just one more line of defense a system administrator can use to keep the server secure and reliable. How to install PyCairo in Python2.7? thanks - WebFaction Community. To install PyCairo in your home directory you need to first install it's dependancies, Pixman and Cairo. 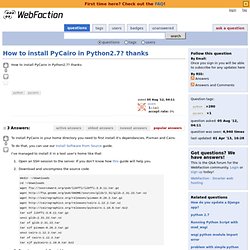 To do that, you can use our Install Software From Source guide. I've managed to install it in a test user's home like that: Build Instructions. How to Install and Configure phpMyAdmin on CentOS 6. PhpMyAdmin is an open source tool used for the administration of MySQL. 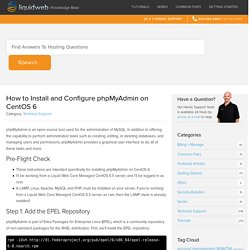 Step 1: Add the EPEL Repository phpMyAdmin is part of Extra Packages for Enterprise Linux (EPEL), which is a community repository of non-standard packages for the RHEL distribution. Rpm -iUvh Step 2: Install phpMyAdmin yum -y update Then it’s a matter of just running one command for installation via apt-get: Setting / removing environment variables permanently and globally. Refreshx2 wrote:I can't believe this hasn't been asked in the past but I can't find it anywhere online. 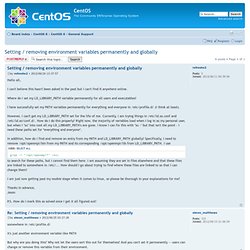 It has been discussed, but websearch (and forum search in particular) is a challenging art mastered only be the practitioners of dark magic. The /etc/ld.so.conf.d/*.conf files do list paths. Dynamic linker will search them. Changes to files are not dynamic though, so you should reset the linkers cache after edits in order to see the effect immediately. /etc/profile does source the /etc/profile.d/* (either the *.sh or *.csh, depending on which shell you use) for login shell.

LD_LIBRARY_PATH is special, and in general its use is not recommended. LD_LIBRARY_PATH is erased during login as a security feature so that you cannot replace the libraries that ssh-agent depends on. CentOS 6 repositories do contain both 32-bit and 64-bit versions of openmpi. The openmpi environment do pose a name conflict, so both cannot be active in same shell.