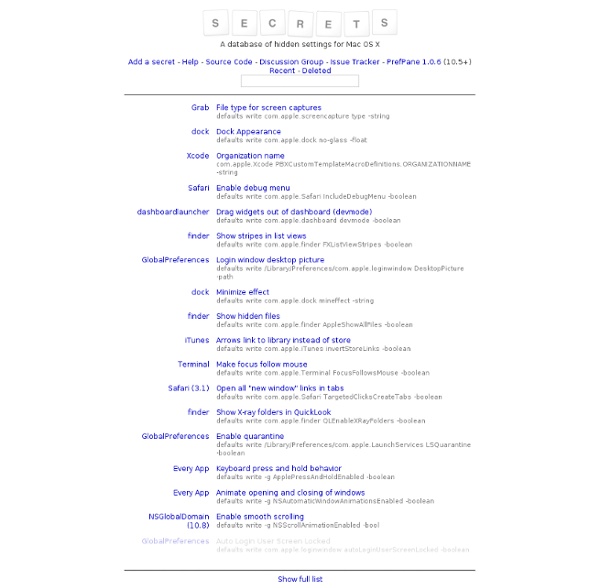 Mac keyboard shortcuts I recently wrote an article about being productive on a small screen, which mentioned my belief that the most effective route to productivity on a computer is learning the available keyboard shortcuts. In this piece, I’d like to share some of the keyboard shortcuts and related functionality that I use every day on the Mac. Firstly, as I stated in the previous article, you should take the time to learn your text editing shortcuts. They’ll pay off every day.

Obsolete Microkernel Dooms Mac OS X to Lag Linux in Performance Disagreements exist about whether or not microkernels are good. It's easy to get the impression they're good because they were proposed as a refinement after monolithic kernels. Microkernels are mostly discredited now, however, because they have performance problems, and the benefits originally promised are a fantasy. The microkernel zealot believes that several cooperating system processes should take over the monolithic kernel's traditional jobs.

KeyRemap4MacBook - Software for OS X Installation Step1 Open a downloaded dmg file, and then open a pkg file in dmg. Step2 Installer is launched. Install KeyRemap4MacBook. 24C3: Inside the Mac OS X Kernel Many buzzwords are associated with Mac OS X: Mach kernel, microkernel, FreeBSD kernel, C++, 64 bit, UNIX... and while all of these apply in some way, "XNU", the Mac OS X kernel is neither Mach, nor FreeBSD-based, it's not a microkernel, it's not written in C++ and it's not 64 bit - but it is UNIX... but just since recently. This talk intends to clear up the confusion by presenting details of the Mac OS X kernel architecture, its components Mach, BSD and I/O-Kit, what's so different and special about this design, and what the special strengths of it are. The talk first illustrates the history behind BSD and Mach, how NEXT combined these technologies in the 1980s, and how Apple extended them in the late 1990 after buying NEXT.

An A-Z Index of the Apple OS X command line Commands marked • are bash built-in commands. bash is the default shell, it runs under Darwin the open source core of OS X. OS X Man Pages - Apple Developer ConnectionDiscussion forum Links to other Sites, Books etc... “Mac OS X is a rock-solid system that's beautifully designed. I much prefer it to Linux” - Bill Joy Category:Free package management systems This is a category of articles relating to software which can be freely used, copied, studied, modified, and redistributed by everyone that obtains a copy: "free software" or "open source software". Typically, this means software which is distributed with a free software license, and whose source code is available to anyone who receives a copy of the software. Subcategories This category has only the following subcategory. Pages in category "Free package management systems"

Eight Terminal Utilities Every OS X Command Line User Should Know · mitchchn.me The OS X Terminal opens up a world of powerful UNIX utilities and scripts. If you’re migrating from Linux, you’ll find many familiar commands work the way you expect. But power users often aren’t aware that OS X comes with a number of its own text-based utilities not found on any other operating system. Learning about these Mac-only programs can make you more productive on the command line and help you bridge the gap between UNIX and your Mac. Update: Thanks to reader feedback, I’ve written about a few more commands in a follow-up post: (And eight hundred more). 1. open Kindle 3.X updater for Kindle 2 and Kindle DX released After a month and a half of testing thanks to the community of MobileRead, I can finally release the first stable version of the Kindle 3.X software updater (help me come up with a better name, please). If you haven’t read my last few Kindle-related posts (read them if you want more technical details of this script), you should know that this allows you to use all the cool new features of the Kindle 3 on a K2 or DX device. Installation is easy and is only three steps: 1) Use “prepare-kindle” script on old Kindle to back up and flash recovery kernel, 2) Copy generated files to Kindle 3 along with “create-updater” script and run it, 3) Copy generated update package back to old Kindle and restart. If that sounds confusing, don’t worry, the readme contains very detailed directions and even how to recover in case anything goes wrong.