This is the web right now 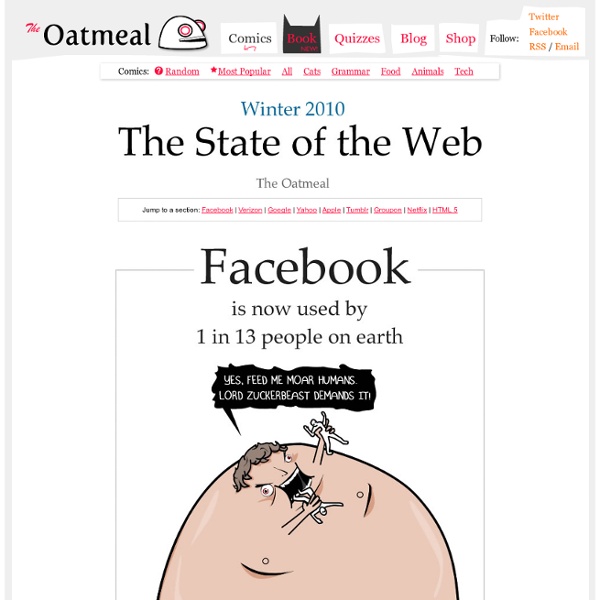 Alex Bogusky's FearLess Revolution - FearLess Blog - Introducing?COMMON Watch as Alex Bogusky, Rob Schuham and John Bielenberg present COMMON, and follow along with the deck below (Download PDF). We’re confident that benefiting people, communities, society, the environment and future generations is the new advantage in business. We’re launching the COMMON brand in support of this transition from competitive advantage to collaborative advantage. COMMON is one part community; one part business prototyper; and one part collaborative brand. A living network of creative people rapidly prototyping dozens or hundreds of progressive businesses designed to solve social problems. Connected to a brand that’s community designed, community owned, and community directed.

10 Words You Need to Stop Misspelling shitmydadsays (shitmydadsays) - shitmydadsays Justin Samuel Halpern was born in a tiny fishing village called “San Diego.” There he spent most of his life being yelled at by his father. Then he transcribed those things on a twitter page called “@shitmydadsays.” Then he wrote a book of the same name. Then he co-created a shitty TV show of the same name. Then, when he had exploited the success of someone else’s words as much as he possibly could, he started this site with his long time friend and conspiracy theorist, Ryan Walter. You can buy his first book, Shit My Dad Says HERE.

Social Media Sites as Talent Incubators The line that may have defined the ‘80’s culturally – “I want my MTV” – was Sting’s vocal contribution to Dire Straits’ “Money for Nothing,” the band’s most successful single from their cart-topping “Brothers in Arms” album. Twenty-five years later (that’s right you older folks, twenty-five years), the refrain might rather seems to have been reversed. “MTV Wants You,” it turns out. Bloomberg News reports that the pioneering cable music video channel released its ‘MTV Music Meter’ on December 14. “scans social networks for bands generating an increasing number of comments,” and is intended “to re-associate and new-associate the MTV brand with music,” according to MTV Network’s head of digital operations, Dermot McCormick. Music Meter will provide “music videos and 30-second samples of tracks” of the most-discussed established and (hopefully) emerging stars, with full songs available for purchase on-site.

entelliz.co 10 European Startups To Watch in 2011 When you hear Silicon Valley discuss the European startup scene it’s often negatively. Some say that the investors aren’t brave enough, some say the entrepreneurs aren’t bold enough. Whether there’s any truth in these accusations or not, the fact is that there are startups across Europe that are brimming with original ideas and creativity. Following on from our 10 Exciting European Startups from 2010, here are 10 startups to look out for in 2011. Pearltrees Visitors to the LeWeb conference last month couldn’t have failed to spot Pearltrees. Pearltrees makes organising groups of links to content incredibly easy. Recent additions to the service include real-time group collaboration and a touch-screen based interface which will be ported to the iPad soon. Planely The idea behind Planely is a certainly niche one, but the Danish startup could well be onto something that frequent air travellers will love. Geomium LikeOurselves Storific Datasift SuperMarmite Viewdle Screach Shutl

HackFwd Evaluating the Tech Start-up Incubators It seems as if a new incubator programs is starting up on a daily basis. In New York City alone, the following programs are kicking off their Spring / Summer programs: I am sure there are more that I am not even aware (if there are others PLEASE LET ME KNOW). What is telling is that the trend further demonstrates the strength of the NYC start-up technology community. The incubators are only now starting to realize the void that has existed in NYC for programs to help early stage start-ups. I wholeheartedly believe that a quality program can be a significant factor in guiding the success of entrepreneurs. For all the good that these programs provide, they are not for everyone. If you are a start-up founder ready to take that plunge and contemplating whether a particular program is worthwhile for you, here are some things to consider: Industry Focus – Some programs are more horizontal focused, meaning they do not hew to a particular industry specialization.

The 18 Mistakes That Kill Startups October 2006 In the Q & A period after a recent talk, someone asked what made startups fail. After standing there gaping for a few seconds I realized this was kind of a trick question. Afterwards I realized it could be helpful to look at the problem from this direction. In a sense there's just one mistake that kills startups: not making something users want. 1. Have you ever noticed how few successful startups were founded by just one person? What's wrong with having one founder? But even if the founder's friends were all wrong and the company is a good bet, he's still at a disadvantage. The last one might be the most important. 2. Startups prosper in some places and not others. Why is the falloff so sharp? It's an interesting question why cities become startup hubs, but the reason startups prosper in them is probably the same as it is for any industry: that's where the experts are. 3. I think this shrinking from big problems is mostly unconscious. 4. 5. 6. 7. Platform is a vague word.