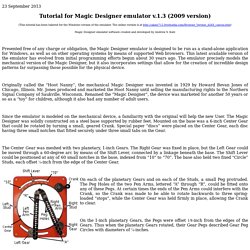 The online version is at Magic Designer emulator software created and developed by Andrew S. Katz Presented free of any charge or obligation, the Magic Designer emulator is designed to be run as a stand-alone application for Windows, as well as on other operating systems by means of supported Web browsers. Originally called the “Hoot Nanny”, the mechanical Magic Designer was invented in 1929 by Howard Bevan Jones of Chicago, Illinois.

MagicDesigner - Overview. Building Stonehenge - This Man can Move Anything. Aerial ropeways: automatic cargo transport for a bargain. Before we start, it is important to note that aerial ropeways (also known as aerial tramways or cableways) can be divided in two groups: monocable and bicable mechanisms. 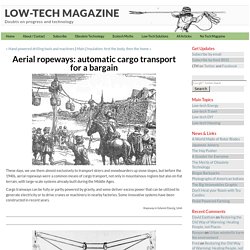 In a monocable system, one endless rope serves to both support and move the carriers in transit. In a bicable (or tricable) system, separate ropes sustain these functions: one or two static support ropes, the "carrying ropes" or "track cables", and one or two light travelling "haul ropes". Ancient and medieval ropeways were of both variety, while modern ropeways (from the 1850s onwards) were initially exclusively monocable systems.

Later, bicable systems took over almost completely. At the end of the 19th century, both ropeway methods were also applied to canal transportation (see the article on trolley canal boats), with monocable systems used for cable trains. Ropeways in ancient times Ropeways have been used for more than 2,000 years, transporting both passengers and goods. Ropeways in the Middle Ages. Simple Machines: Wheel and Axel Tutorial. Simple machines make our lives easier by allowing us to do tasks with less force. 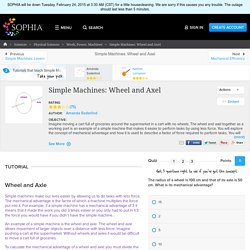 The mechanical advantage is the factor of which a machine multiplies the force put into it. For example, if a simple machine has a mechanical advantage of 3 it means that it made the work you did 3 times easier or you only had to put in 1/3 the force you would have if you didn’t have the simple machine. An example of a simple machine is the wheel and axle. The wheel and axle allows movement of larger objects over a distance with less force. Digital STEAM Workshop. Let’s say your little brother wants to ride a bike like you, but yours is too big for him to reach the pedals. 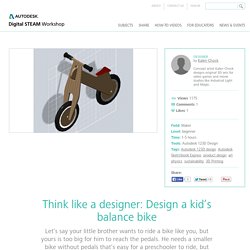 He needs a smaller bike without pedals that’s easy for a preschooler to ride, but stable enough that he doesn’t lose balance when he’s moving fast. With this product design challenge, you can create a toddler’s balance bike that meets your little brother’s need for speed—without causing any playground accidents. Get creative with design in class In this student art challenge, you’ll learn skills that designers like Kalen Chock use every day at work: researching target audience needs, sketching 2D digital art, applying principles of perspective and physics, and presenting a 3D design for a balance bike that’s safe, comfortable, and fun to ride.

With creativity and critical thinking, you will design a bike for tiny tykes that can be made with recycled and nontoxic materials. Build a Catapult. (Lesson Courtesy the Cornell Center for Materials Research (CCMR). 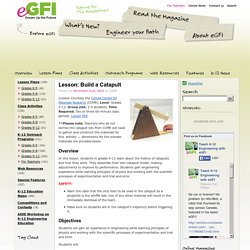 Level: Grades 5-12. Group size: 2-4 students. Time Required: Two or three 60-minute class periods. Lesson PDF. **Please note: Teachers who do not borrow the catapult kits from CCMR will need to gather and construct the materials for this activity — dimensions for the wooden materials are provided below. LEGO NXT Resources. 'Robotics in Education' mailing list This mailing list for teachers provides a forum for discussion into the issues facing robotics in the classroom. 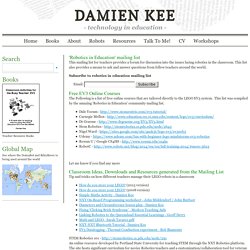 ROBOTIS. Fun From Yamaha. Friends of the Sea Papercraft. Paper Toys - Paper Cut-Outs - Free at PaperToys.com. March 2011. Here is a motorized drinking bear automaton believed to be produced around 1932 by the Decamps firm. 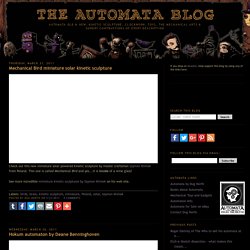 The bear measures about 14 inches tall, and is somewhat atypical in that it has white fur rather than brown or black. The bear sure looks like it is drinking, but in reality, there is hole in the the bottom of the cup. A tube starting at this hole runs down the arm, across the back, up the right arm, and into the bottom of the bottle.

The motion of raising one arm drains the liquid into the other, allowing the bear to drink endlessly. It's an ingenious design. From the eBay description of this drinking bear: The Decamps electric Dinking Bear is a fun automaton and one of a very few that uses water. Here is the full ebay listing with many photographs and a lengthy description of this vintage motorized drinking bear automaton Labels: animals, drinking, France, motion, Roullet et Decamps, vintage, water. Gears_and_pulleys-r2.pdf (application/pdf Object) Mechanisms Index Page. Card 1_Page_1 - Meccano Gallery. Meccano Manuals 1954-61 - Covers.