The 50 Scariest Books of All Time 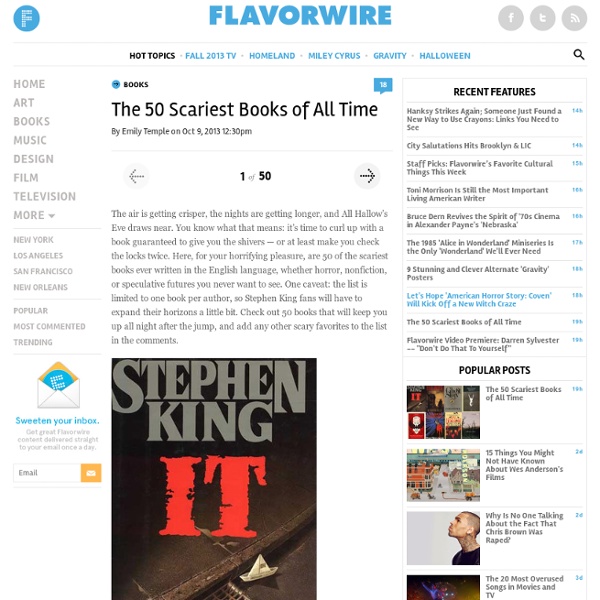 The air is getting crisper, the nights are getting longer, and All Hallow’s Eve draws near. You know what that means: it’s time to curl up with a book guaranteed to give you the shivers — or at least make you check the locks twice. Here, for your horrifying pleasure, are 50 of the scariest books ever written in the English language, whether horror, nonfiction, or speculative futures you never want to see. IT, Stephen King All right, let’s get this out of the way up front: Stephen King is the you-know-what of horror, and if there wasn’t this pesky rule about keeping it to one book per author, this list could almost be wholly populated by his terrifying reads. Related:  A classer 1

John Cartan - 20 Strange and Wonderful Books 20. The Tolkien Reader by J. R. R. The works of J.R.R. As I grow older, it's his short stories I particularly value. Tolkien wrote this story to demonstrate his belief that fairy tales are for adults. PoemHunter.Com - Thousands of poems and poets.. Poetry Search Engine The 5 Most Horrifyingly Wasteful Film Shoots Whether you're watching a bunch of environmentally conscious shows during NBC's "Green Week" or taking in cautionary tales like The Day After Tomorrow, it's obvious Hollywood cares about our fragile environment. Or at least they want us to think they do. When it comes time to getting just the right shot, wiping out a big hunk of ecosystem is considered a small price to pay. For instance ... #5. As ridiculous film shoots go, few can top Apocalypse Now. "CUT! But then there's the most iconic shot in a film full of iconic shots, the opening scene of the palm trees burning under a storm of napalm as Jim Morrison wails over the top about Oedipus and the transient nature of existence. After all, it's an impressive special effect for 1979. Surprise! That's pretty much it. Getty"Now we'll highlight the tragic reality of unwanted puppies by throwing this sack in the river." Then again, this was the 1970s. #4. "Fronds with Benefits? Environmentalists were understandably furious. #3. Wait, what?

30 Books I’m Glad I Read Before 30 In various ways, these 30 books convey some of the philosophy of how Angel and I live our lives. I honestly credit a fraction of who I am today to each title. Thus, they have indirectly influenced much of what I write about on this site. A medley of both fiction and nonfiction, these great reads challenged my internal status quo, opening my mind to new ideas and opportunities, and together they gave me a basic framework for living, loving, learning and working successfully. If you haven’t read these books yet, I highly recommend doing so. They will enrich your library and your life. Stumbling on Happiness by Daniel Gilbert – Gilbert, a Harvard professor of psychology has studied happiness for decades, and he shares scientific findings that just might change the way you look at the world. What are your favorite books? Photo by: Katie Harris

The 16 Best Dystopian Books Of All Time Dystopian novelsâ€”stories of the horrific futureâ€”are so common as to be almost forgettable. Here is a compilation of what I believe are the 16 greatest of the genre. I could happily list twice as many that are amazing, but these are the best. From the post-apocalyptic wasteland to deadly viruses to social malaise, all possible bad futures end here. 16. That Hideous Strength by CS Lewis Best known for his Narnia novels, CS Lewis also wrote a trilogy dealing with visiting other planetsâ€”well the first two books did. 15. Wow, can you get more polar opposite of CS Lewis than Margaret Atwood? 14. While perhaps not as well known as some, John Christopher (the pen name of Samuel Youd) wrote a fantastic trilogy of young adult novels, set in a far future where the world has reverted to a feudal society after a global ecological disaster. 13. This novel, combined with Brooks’ Zombie Survival Guide are all you need to face the inevitable zombie apocalypse. 12. 11. 10. 9. 8. 7. 6. 5. 4. 3. 2.

The 50 Books Everyone Needs to Read, 1963-2013 The thing about reading is this: it takes a long time. There are innumerable books in the world, and many more good ones than can be read by any mortal in a lifetime. It’s hard to choose — especially if you’re a slow reader. So, to go along with the list of the best albums from 1963-2013, here you will find a single must-read book from each of the last 50 years. Of course, this is by its very nature an absurd undertaking, and many books have gotten the short end of the stick — there’s no other way to do it. 1963 — The Bell Jar, Sylvia Plath Sylvia Plath’s only novel manages to be both elegant and filled with raw, seething emotion – no small feat, and not the least of the reasons the reading world is still obsessed with her. Also recommended: Where the Wild Things Are, Maurice Sendak; The Group, Mary McCarthy; V., Thomas Pynchon; Cat’s Cradle, Kurt Vonnegut; The Feminine Mystique, Betty Friedan

10 Modern Must-Read Sci-Fi Masterpieces Any discussion of science fiction invariably begins and ends with the masters of the genre. Jules Verne, Isaac Asimov, Robert A. Heinlein, Phillip K. Dick, Arthur C. Clarke, Ray Bradbury, H.G. People didn’t suddenly stop writing science fiction novels in 1980. The Dark Tower (1982 – 2004) Written by: Stephen King King is best known as one of the modern masters of fantasy and horror but The Dark Tower series is as much science fiction as it is anything. Neuromancer (1984) Written by: William Gibson William Gibson created the cyber punk genre with Neuromancer. Ender’s Game (1985) Written by: Orson Scott Card There’s never been anything quite like Ender’s Game, before or since. The Liaden Universe (1988 – 2010) Written by: Sharon Lee and Steve MillerAgent of Change was the first book published (though not the first chronologically) in what would eventually become known as the Liaden Universe. Hyperion Cantos (1989 – 1997) Written by: Dan Simmons The Hyperion Cantos is actually four books.

10 Novels That Will Disturb Even the Coldest of Hearts [Editor's note: While your Flavorwire editors take a much-needed holiday break, we're revisiting some of our most popular features of the year. This post was originally published May 18, 2011.] Jezebel-writer Anna North’s debut novel, America Pacifica, is out today. The story centers around an impoverished teenage girl who is struggling to survive on an increasingly toxic island in the Pacific Ocean after a future Ice Age sets in and freezes the mainland. “A Good Man is Hard to Find” by Flannery O’Connor In this short story, a family gets in a car accident and encounters a godless trio led by an escaped convict known as “the Misfit.”

Top 10 Underrated Fantasy Stories Before 1937 Books J.R.R. Tolkien changed the face of the fantasy genre when he published “The Hobbit” in 1937 and subsequently his famous “Lord of the Rings” trilogy. But with this defining moment in the genre, many of the great works that preceded Tolkien have been forgotten in time. This list gives you my top ten underrated classics of fantasy prior to the publication of “The Hobbit.” Lud-in-the-Mist by Hope Mirrlees Publication Date: 1926 Probably the most obscure thing I shall mention on this list, this is a rather interesting tale in an alternate world where some rather mundane people live in peace, but are interrupted by a flow of fairy fruit form the neighboring lands. The Water-Babies by Charles Kingsley Publication Date: 1863 This is a children’s novel that I might not recommend for the kids, but anybody with an interest in Victorian fairy tales and a bit of controversy absolutely must pick this one up. The House on the Borderland by William Hope Hodgson Publication Date: 1908 Lost Horizon

- StumbleUpon This is about the synchronicity number 23, and thus about the phenomena of synchronicity in general. To write about this topic objectively is impossible, as all experiences are necessarily subjective, involving as they do the element of consciousness, which cannot be instrumented. This is perhaps a study in the affirmation that any assertion of an objective observer is inherently impossible, and yet at the same time there is a deeply imbedded pattern of coherency in all that we regard as random. Randomness itself is nothing more than a pattern of deeply imbedded complexity of order; an order so complex it is not immediately discernible or obvious. My first synchronicity experiences with numbers were not with 23, but with 2:22:22, first seen as the time on my digital watch on the Summer Solstice in 1981. That is to some degree what happened with me and twenty three. During the same period I was also intensely interested in the golden mean.

Goodreads | Recent Updates Books that will induce a mindfuck Here is the list of books that will officially induce mindfucks, sorted alphabetically by author. Those authors in bold have been recommended by one or more people as being generally mindfucking - any books listed under their names are particularly odd. You're welcome to /msg me to make an addition to this list. And finally, although he's way down at the bottom, my personal recommendation is definitely Howard Zinn's A People's History of the United States, as it turns the ultimate mindfuck: inverting the world-view of our entire culture, and it is non-fiction.