What a difference a word can make 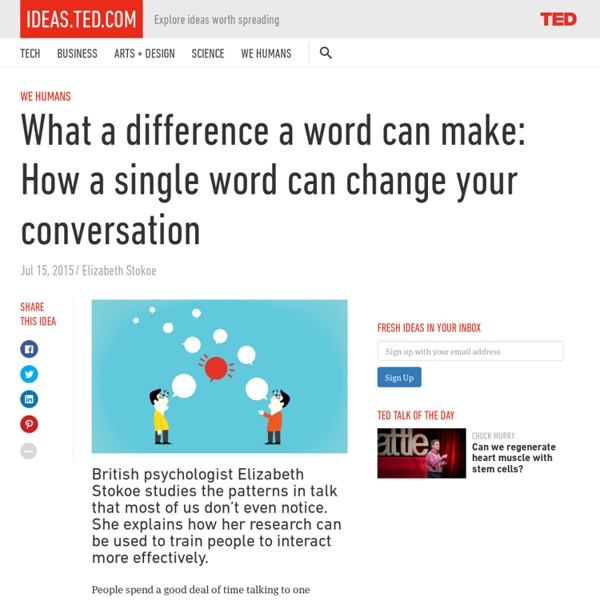 People spend a good deal of time talking to one another, and in general we do it pretty well. We might feel excited, angry, embarrassed, or — if we’re lucky — loved, in the course of our daily conversations. So is there any benefit to thinking about a science of talk? Can we really gain anything from scientific analysis of something we “just do”? I believe we can, and I’ve spent the last 20 years studying real talk from real people talking to each other in real time. And while the linguist Noam Chomsky once described conversation as a “disorderly phenomenon,” I can tell you that it’s no such thing. Take this ordinary telephone call between two friends, Nancy and Hyla, transcribed according to the standard conversation analysis transcription system, which includes intonation and the actual sounds being made rather than just the correct spelling of a word (lines under a word represent emphasis and different movements in pitch, the equals sign means that the turns are very rapid): 1. 2. 3.

9 Phrases Smart People Never Use In Conversation We’ve all said things that people interpreted much differently than we thought they would. These seemingly benign comments lead to the awful feeling that only comes when you’ve planted your foot firmly into your mouth. Verbal slip-ups often occur because we say things without knowledge of the subtle implications they carry. Understanding these implications requires social awareness—the ability to pick up on the emotions and experiences of other people. TalentSmart has tested the emotional intelligence (EQ) of more than a million people and discovered that social awareness is a skill in which many of us are lacking. We lack social awareness because we’re so focused on what we’re going to say next—and how what other people are saying affects us—that we completely lose sight of other people.

The Science Of ‘Hangry’, Or Why Some People Get Grumpy When They’re Hungry Have you ever snapped angrily at someone when you were hungry? Or has someone snapped angrily at you when they were hungry? If so, you’ve experienced “hangry” (an amalgam of hungry and angry) – the phenomenon whereby some people get grumpy and short-tempered when they’re overdue for a feed. But where does hanger come from? The Hidden Connection Between Morality and Language Tragedy can strike us any time, but that doesn’t mean we can’t make the best of it. When Frank’s dog was struck and killed by a car in front of his house, he grew curious what Fido might taste like. So he cooked him up and ate him for dinner. It was a harmless decision, but, nonetheless, some people would consider it immoral.

Student-Athlete Media Training: The LSU Way The following feature was written by Ron Higgins, NOLA.com/The Times Picayune's LSU columnist. Read it here: LSU Tigers learn how to talk the talk | Ron's Fast Break LSU quarterback Anthony Jennings is smiling nervously and shifting his weight from foot to foot. He's not trying to read a defense just before taking a snap on fourth-and-goal with the game on the line. No, the guy who calmly came off the bench late in last year's regular season finale and guided LSU on a 99-yard game-winning drive against Arkansas, is standing in front of someone peppering him with questions. "There's a big controversy at quarterback this year, who's going to start?"

How to help principals do a better job? Train their bosses OAKLAND, Calif. — It was almost the end of first period at Bret Harte Middle School when the five superintendents descended on math class. Dressed in suits and armed with pens, notebooks, and laptops, the superintendents had one specific goal as they fanned out across the classroom, interacting with students: to look for evidence that a geometry lesson was aligned to the new state math standards. “You’re all working together?”

3 Things To Do For An Awesome First Impression (Says Science)  By Christine Schoenwald First impressions can be powerful and long-lasting, so you'd think they would take a lot of time and consideration when being formed. Sadly, that's not the case. A first impression takes about 7 seconds -- 7 fast, little seconds that might make or break your career, or influence your future spouse that you're worthy of speaking to. It isn't that you're following your intuition, as these instincts aren't coming from your gut; they're a type of unconscious thinking called rapid cognition. "I think the word intuition is a loaded word.

The best music to listen to for optimal productivity, according to science Oftentimes we have innumerable distractions at work competing for our attention. Luckily, music can help put us back on a more productive track. Studies out of the University of Birmingham, England, show that music is effective in raising efficiency in repetitive work - so if you’re mindlessly checking email or filling out a spreadsheet, adding some tunes will make your task go by that much faster. But when it comes to tasks that require more brainpower, finding that perfect playlist is not so easy. Luckily, we have science at our disposal to help. Based on some of what we know about how music affects productivity, you should try funnelling this kind of music through your headphones the next time you’re feeling unproductive:

Thinking alike changes how we speak : NewsCenter As social creatures, we tend to mimic each other’s posture, laughter, and other behaviors, including how we speak. Now a new study shows that people with similar views tend to more closely mirror, or align, each other’s speech patterns. In addition, people who are better at compromising align more closely. “Few people are aware that they alter their word pronunciation, speech rate, and even the structure of their sentences during conversation,” explained Florian Jaeger, associate professor of brain and cognitive sciences at the University of Rochester and coauthor of the study recently published in Language Variation and Change. “What we have found is that the degree to which speakers align is socially mediated.”