What is Bystander effect? How can we counteract it?

While we might all like to believe that this is true, psychologists suggest that whether or not you intervene might depend upon the number of other witnesses present. Darley Latane 1968. Chapter 5: Experimental Research – Research Methods in Psychology. In the late 1960s social psychologists John Darley and Bibb Latané proposed a counter-intuitive hypothesis. 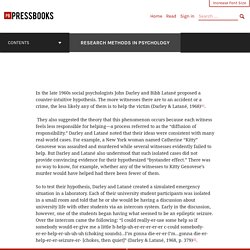 The more witnesses there are to an accident or a crime, the less likely any of them is to help the victim (Darley & Latané, 1968). They also suggested the theory that this phenomenon occurs because each witness feels less responsible for helping—a process referred to as the “diffusion of responsibility.” Darley and Latané noted that their ideas were consistent with many real-world cases.

For example, a New York woman named Catherine “Kitty” Genovese was assaulted and murdered while several witnesses evidently failed to help. But Darley and Latané also understood that such isolated cases did not provide convincing evidence for their hypothesized “bystander effect.” So to test their hypothesis, Darley and Latané created a simulated emergency situation in a laboratory.

In actuality, there were no other students. The Parable of the 38 Witnesses. Bystander Effect: What Is It and What You Can Do About It. What the bystander effect looks like A little after 3 a.m. on March 13, 1964, Catherine “Kitty” Genovese parked her car and walked to her apartment in Queens, New York, after finishing her shift as a bar manager.

Serial killer Winston Moseley was out to victimize someone that night. Genovese became his target. When he followed her, she ran. As Moseley reached her and began stabbing her with a hunting knife, Genovese screamed, “Oh, my God, he stabbed me! When lights in surrounding apartments flipped on and one man called out his window, the attacker ran and hid in the shadows. There was widespread public condemnation of the witnesses who did not come to Kitty Genovese’s aid.

The related terms “bystander effect” and “diffusion of responsibility” were coined by social psychologists as a result of this research. How to Overcome the Bystander Effect. Psychologists have long been interested in exactly why and when we help other people.

Imagine that you are walking into a large department store. Being Observant Being Skilled and Knowledgeable Guilt Feeling Good. Bystander Effect Demonstrates That People Help Each Other. The antidote to the bystander effect lies in one of the many questions we ask ourselves: Are other people in the group aware of me? 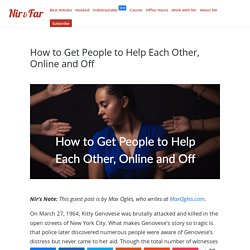 Most of the time, we see ourselves as invisible members of the group; we’re part of the collective but not singled out. When we begin to feel that the group is aware of us personally, then we decide to take action. For example, if I knew that a TV camera would air video footage of me driving past the vehicle in distress, I would be much more likely to stop and help. Psychologists call this “public self-awareness” and it’s the key to reversing the bystander effect. A group of Dutch psychologists, led by Marco van Bommel, designed a clever and incredibly simple way to test public self-awareness in a bystander situation online.

Finally, the researchers added one small feature to make the study participants publicly self-aware: In a public list of people in the community, the participant’s name was highlighted in a red font.