Bystander Effects to the general public. Bystander Effect explained after woman attacked. The Bystander Effect The Death of Kitty Genovese mp4. Bystander effect (video) Family violence is not a private matter, Latest Singapore News. A mother of three was rescued after 15 years of torment by her abusive husband. 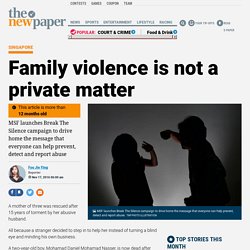 All because a stranger decided to step in to help her instead of turning a blind eye and minding his own business. A two-year-old boy, Mohamad Daniel Mohamad Nasser, is now dead after being abused by his mother and her boyfriend. All because the people around them never thought to intervene or inform the authorities. This thin line between life and death was highlighted yesterday at the National Family Violence Networking System Conference, where the Ministry of Social and Family Development (MSF) launched the Break The Silence campaign.

The three-year campaign wants to drive home the message that family violence is not a private matter and that people who are aware of family violence can do something about it. Everyone can play a part to prevent, detect and report abuse, said MSF. EXPRESSION: (above) Some of the artwork by survivors of family violence, showcased at Star Shelter. Mohamad Daniel Mohamad Nasser. TODAYonline. SINGAPORE — On Sunday evening, minutes before the 6pm curfew came into effect in the city of Los Angeles in the United States, Ms Crystal Chum, 35, was told that a hair salon less than a two minutes’ walk away from the nail salon she co-owns had been looted. 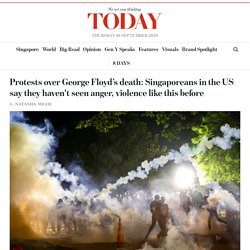 “But there is not much we can do right now, the police are too busy with the protests, too,” the Singaporean said. Ms Chum, who has been living in California for the past 10 years, was slightly taken aback by the turn of events: “I’ve seen various protests and demonstrations in my years living here, but this is the first time that it has escalated to such a severe state over the course of a few days and to many cities.

And the anger and frustration of the community is felt on a much larger scale.” Over the weekend, protests erupted across several cities in the US, following the death of 46-year-old African-American George Floyd last Monday (May 25). However, these protest marches soon turned violent with police cars being set on fire. How The Murder Of Kitty Genovese Created The Bystander Effect. Wikimedia CommonsKitty Genovese whose muder would inspire the psychological phenomenon known as the bystander effect.

At approximately 3:15 a.m. on March 13, 1964, a woman was murdered. Her name was Kitty Genovese. She was 28 years old, “self-assured beyond her years,” and had a “sunny disposition.” However, on that Friday evening, none of that mattered. As Kitty Genovese was stabbed to death in an alleyway outside her home, the friends and neighbors she had lived next to for several years stood by, choosing not to get involved as she lay there dying. Around 2:30 a.m. on the night of her attack, Kitty Genovese left the bar she worked at and headed for home. A few minutes after she left, she stopped at a traffic light. At 3:15, Genovese pulled into the parking lot of the Kew Gardens Long Island Rail Road station parking lot, which was about 100 feet from her front door.

Getty ImagesKitty at work at Ev’s bar. Upon being stabbed, Genovese screamed, running toward her home. How to Overcome the Bystander Effect. Psychologists have long been interested in exactly why and when we help other people.

Imagine that you are walking into a large department store. Being Observant Being Skilled and Knowledgeable Guilt.