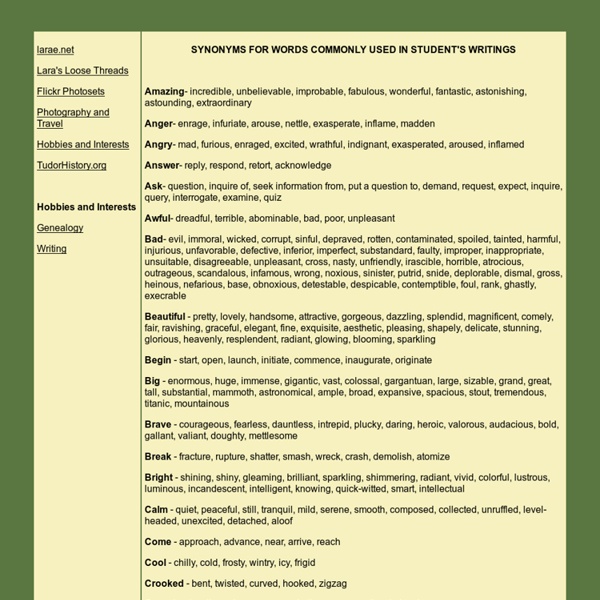 Lost in Translation: An Illustrated Catalog of Beautiful Untranslatable Words from Around the World by Maria Popova The euphoria experienced as you begin to fall in love, the pile of books bought but unread, the coffee “threefill,” and other lyrical linguistic delights. “Words belong to each other,” Virginia Woolf said in the only surviving recording of her voice, a magnificent meditation on the beauty of language. But what happens when words are kept apart by too much unbridgeable otherness? 18 Common Words That You Should Replace in Your Writing It’s a familiar scene: you’re slumped over your keyboard or notebook, obsessing over your character. While we tend to agonize over everything from structure to backstory, it’s important to weigh how you write something too. A perfectly constructed world is flat on the page if you use feeble, common words. When you’re finished constructing your perfectly balanced world, do your writing a favor and take another pass to weed out these 18 haggard words. Good

Persuasive Writing - Emotional vs Intellectual Words I have written about persuasive writing in an article where I discuss Ethos, Logos, Pathos. Persuasive writers use words to convince the reader to listen or to act. I found this useful list of words in an interesting article called Common words that suck emotional power out of your content by John Gregory Olson. The 100 Most Beautiful Words in English ere are the 100 most beautiful words in English. How do we know we have the most beautiful? They were chosen by Robert Beard, who has been making dictionaries, creating word lists, and writing poetry for 40 years. For five years he wrote the Word of the Day at yourDictionary.com and since 2004 he has written up 1500 words in the series, So, What's the Good Word?

60 Awesome Search Engines for Serious Writers June 20th, 2010 Finding the information you need as a writer shouldn’t be a chore. Luckily, there are plenty of search engines out there that are designed to help you at any stage of the process, from coming up with great ideas to finding a publisher to get your work into print. Both writers still in college and those on their way to professional success will appreciate this list of useful search applications that are great from making writing a little easier and more efficient. Syllables, Scrabble Letters, and Picking Brand Names - Rich Barton The Completely Ownable, “Made-Up” Consumer Brand Wins Long Term I wrote this as a private email in 2006 and just refreshed for the blog “Should we call our site something literal or should we make up a new word?” This is a question I often get asked by consumer product/service entrepreneurs.

45 ways to avoid using the word 'very' Writers Write is your one-stop resource for writers. Use these 45 ways to avoid using the word ‘very’ to improve your writing. Good writers avoid peppering their writing with qualifiers like ‘very’ and ‘really’. They are known as padding or filler words and generally add little to your writing. According to Collins Dictionary: ‘Padding is unnecessary words or information used to make a piece of writing or a speech longer.

How To Use Google For Hacking Google serves almost 80 percent of all search queries on the Internet, proving itself as the most popular search engine. However Google makes it possible to reach not only the publicly available information resources, but also gives access to some of the most confidential information that should never have been revealed. In this post I will show how to use Google for exploiting security vulnerabilities within websites. The following are some of the hacks that can be accomplished using Google. 1. Hacking Security Cameras Describing food - World Food and Wine Describing food is not as easy as it would seem. How many ways can you say something was really tasty? Not enough to keep you interested in what you are writing. That is why we have to borrow words from other areas to describe the food and the effect it has on us.

The Ten Mistakes « Holt Uncensored - Pat Holt on Books, Book Publishing Industry, Reviews Like many editorial consultants, I’ve been concerned about the amount of time I’ve been spending on easy fixes that the author shouldn’t have to pay for. Sometimes the question of where to put a comma, how to use a verb or why not to repeat a word can be important, even strategic. But most of the time the author either missed that day’s grammar lesson in elementary school or is too close to the manuscript to make corrections before I see it. So the following is a list I’ll be referring to people *before* they submit anything in writing to anybody (me, agent, publisher, your mom, your boss). From email messages and front-page news in the New York Times to published books and magazine articles, the 10 ouchies listed here crop up everywhere. They’re so pernicious that even respected Internet columnists are not immune.

100 Exquisite Adjectives By Mark Nichol Adjectives — descriptive words that modify nouns — often come under fire for their cluttering quality, but often it’s quality, not quantity, that is the issue. Plenty of tired adjectives are available to spoil a good sentence, but when you find just the right word for the job, enrichment ensues. Practice precision when you select words. Here’s a list of adjectives: 10 Important Google URLs That Every Google User Should Know Which websites and apps have background access to my Google account? What does Google know about me? Where can I see all the ads that I’ve clicked on Google search? What does Google know about the places I’ve visited recently?