5 Timeless Books of Insight on Fear and the Creative Process 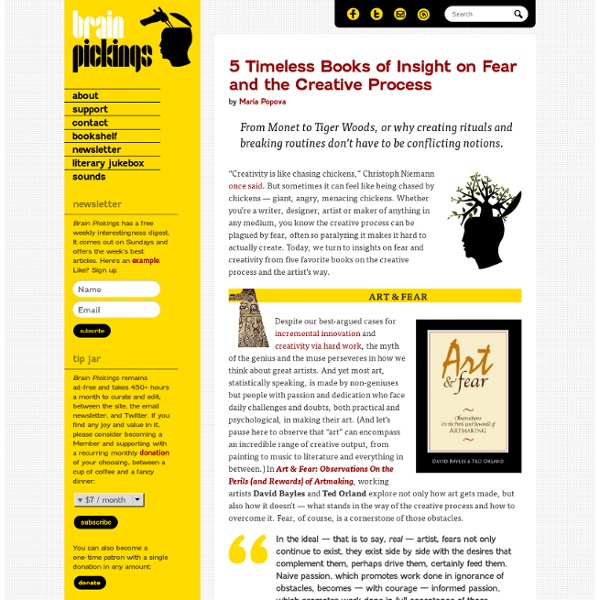 by Maria Popova From Monet to Tiger Woods, or why creating rituals and breaking routines don’t have to be conflicting notions. “Creativity is like chasing chickens,” Christoph Niemann once said. But sometimes it can feel like being chased by chickens — giant, angry, menacing chickens. Whether you’re a writer, designer, artist or maker of anything in any medium, you know the creative process can be plagued by fear, often so paralyzing it makes it hard to actually create. Today, we turn to insights on fear and creativity from five favorite books on the creative process and the artist’s way. Despite our best-argued cases for incremental innovation and creativity via hard work, the myth of the genius and the muse perseveres in how we think about great artists. In the ideal — that is to say, real — artist, fears not only continue to exist, they exist side by side with the desires that complement them, perhaps drive them, certainly feed them. Are you paralyzed with fear? Donating = Loving

Secrets of The Phantom Tollbooth: Norton Juster and Jules Feiffer on Creativity, Anxiety, and Failure by Maria Popova “Failure is a process … you have to fail over and over and over again to get anything that’s worthwhile.” In 1961, a young architect by the name of Norton Juster received a grant for a book on urban perception and settled down at his house in Brooklyn Heights to write it. Struggling with the process, however, he began toying with a playful story about a boy named Milo in an effort to distract himself from the burden of his workload, and showed his drafts to his neighbor, an emerging political cartoonist named Jules Feiffer.

basic stitches Stitching or sewing has a history dating back to the prehistoric times. It is believed, with archaeological evidences, that sewing must have come into being since the stone ages, when people had begun to sew to attach pieces of animal skin using needles made of bones, antlers and ivory. They probably must have used threads made of animal parts like veins. As the times progressed and sewing started to become an integral part of life, not only newer methods of sewing styles developed, but many other materials were tried as needles and threads. For many thousands of years, sewing or stitching was done exclusively by hands. Later, machines which helped to assist sewing and weaving were developed.

On a Beam of Light: The Story of Albert Einstein, Illustrated by the Great Vl... by Maria Popova The charming visual tale of an introverted little boy who grew up to become the quintessential modern genius. Given my soft spot for picture-book and graphic-novel accounts of famous lives, including Charles Darwin, Julia Child, Hunter S. Thompson, Richard Feynman, Ella Fitzgerald, and Steve Jobs, I was instantly taken with On a Beam of Light: A Story of Albert Einstein (public library). Famous Advice on Writing: The Collected Wisdom of Great Writers By Maria Popova By popular demand, I’ve put together a periodically updated reading list of all the famous advice on writing presented here over the years, featuring words of wisdom from such masters of the craft as Kurt Vonnegut, Susan Sontag, Henry Miller, Stephen King, F. Scott Fitzgerald, Susan Orlean, Ernest Hemingway, Zadie Smith, and more. Please enjoy. Jennifer Egan on Writing, the Trap of Approval, and the Most Important Discipline for Aspiring Writers “You can only write regularly if you’re willing to write badly… Accept bad writing as a way of priming the pump, a warm-up exercise that allows you to write well.” The Effortless Effort of Creativity: Jane Hirshfield on Storytelling, the Art of Concentration, and Difficulty as a Consecrating Force of Creative Attention “In the wholeheartedness of concentration, world and self begin to cohere.

Fail Safe: Debbie Millman's Advice on Courage and the Creative Life By Maria Popova The seasonal trope of the commencement address is upon us as wisdom on life is being dispensed from graduation podiums around the world. After Greil Marcus’s meditation on the essence of art and Neil Gaiman’s counsel on the creative life, here comes a heartening speech by artist, strategist, and interviewer extraordinaire Debbie Millman, delivered to the graduating class at San Jose State University. The talk is based on an essay titled “Fail Safe” from her fantastic 2009 anthology Look Both Ways: Illustrated Essays on the Intersection of Life and Design (public library) and which has previously appeared on Literary Jukebox. The essay, which explores such existential skills as living with uncertainty, embracing the unfamiliar, allowing for not knowing, and cultivating what John Keats has famously termed “negative capability,” is reproduced below with the artist’s permission.

Build A Curved-Wall Glass-Block Shower This beautiful bath-improvement project is dedicated to the millions of do-it-yourselfers who've always dreamed of building with glass block, but didn't have the foggiest idea of where to start. That's right. You can build a gorgeous glass-block shower even if you've never laid a single block. It's all possible with the Glass Block System--a new line of shower kits from Pittsburgh Corning. Each kit includes an acrylic shower pan, glass blocks, and all the necessary hardware, such as spacers, silicone sealant, anchors and reinforcing wire.

How to Write with Style: Kurt Vonnegut’s 8 Keys to the Power of the Written Word Find a Subject You Care About Find a subject you care about and which you in your heart feel others should care about. It is this genuine caring, and not your games with language, which will be the most compelling and seductive element in your style. I am not urging you to write a novel, by the way — although I would not be sorry if you wrote one, provided you genuinely cared about something. 25 Ways To Fight Your Story’s Mushy Middle For me, the middle is the hardest part of writing. It’s easy to get the stallions moving in the beginning — a stun gun up their asses gets them stampeding right quick. I don’t have much of a problem with endings, either; you get to a certain point and the horses are worked up into a mighty lather and run wildly and ineluctably toward the cliff’s edge. But the middle, man, the motherfucking middle.