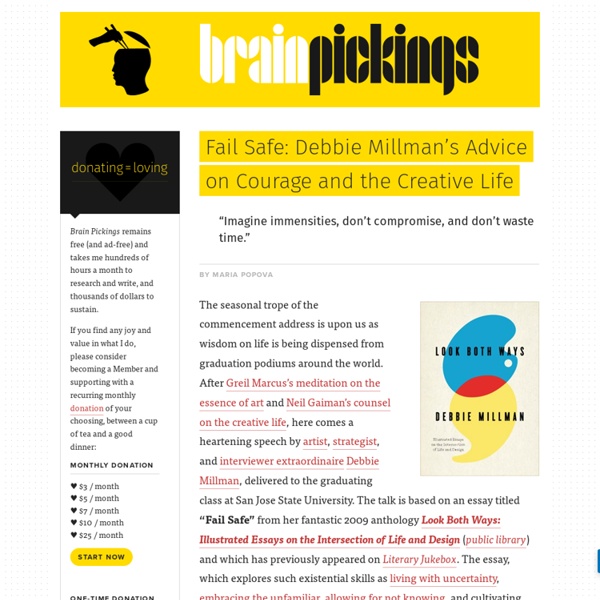 By Maria Popova The seasonal trope of the commencement address is upon us as wisdom on life is being dispensed from graduation podiums around the world. After Greil Marcus’s meditation on the essence of art and Neil Gaiman’s counsel on the creative life, here comes a heartening speech by artist, strategist, and interviewer extraordinaire Debbie Millman, delivered to the graduating class at San Jose State University. The talk is based on an essay titled “Fail Safe” from her fantastic 2009 anthology Look Both Ways: Illustrated Essays on the Intersection of Life and Design (public library) and which has previously appeared on Literary Jukebox. The essay, which explores such existential skills as living with uncertainty, embracing the unfamiliar, allowing for not knowing, and cultivating what John Keats has famously termed “negative capability,” is reproduced below with the artist’s permission. If you imagine less, less will be what you undoubtedly deserve.

Secrets of The Phantom Tollbooth: Norton Juster and Jules Feiffer on Creativity, Anxiety, and Failure by Maria Popova “Failure is a process … you have to fail over and over and over again to get anything that’s worthwhile.” In 1961, a young architect by the name of Norton Juster received a grant for a book on urban perception and settled down at his house in Brooklyn Heights to write it. Struggling with the process, however, he began toying with a playful story about a boy named Milo in an effort to distract himself from the burden of his workload, and showed his drafts to his neighbor, an emerging political cartoonist named Jules Feiffer. Juster never wrote the urbanism book — instead, he teamed up with Feiffer and together they dreamt up The Phantom Tollbooth, which went on to become one of the most celebrated children’s books of all time, brimming with timeless philosophy for grown-ups — its map of The Kingdom of Wisdom alone is a profound metaphor for curiosity and the human condition.

Symposium on Louise Richardson’s “Flavour, Taste and Smell” (Mind & Language 28 (3), 322-341) I’m very glad to be able to kick off the first of a series of symposia that Brains will be hosting on papers from Mind & Language. This month our target article is “Flavour, Taste and Smell”, by Louise Richardson of York University in the UK. Louise’s article, which thanks to the kind cooperation of Wiley-Blackwell is available freely at the preceding link, discusses the relationship between scientific investigation of the senses and our everyday way of individuating the sense modalities. Specifically, she argues that the commonsense idea that flavors are tasted rather than smelled is not refuted by scientific findings showing that olfactory receptors play a significant role in our perception of flavor. Similar to the format made familiar by the Online Consciousness Conference, our symposium will begin with a short introductory video from Louise, followed by written commentaries from Fiona Macpherson, Mohan Matthen, Matthew Nudds, and Barry C.

Why we need creative confidence In 2012, IDEO founder and longtime Stanford professor David Kelley took the TED stage in Long Beach and shared a deeply personal story. It was the tale of his own cancer diagnosis, of finding a lump in his neck and being told he had a 40% chance of survival. This was clearly a sobering moment, but he wasn’t sharing the story to seek our sympathy. Philosophy 156: Different Kinds of Mental States We said that a mental state or mental process is a kind of condition or process which can be had only by thinking, feeling creatures. Some examples we considered were: pains itches the experience of seeing red hearing yourself think wanting to go on vacation remembering that Henry VIII was an English king remembering your first kiss believing that Harvard is located in Massachusetts emotions intending to do the laundry tomorrow Let's talk a bit about some important categories of mental states.

Bird by Bird: Anne Lamott’s Timeless Advice on Writing and Why Perfectionism Kills Creativity by Maria Popova “Perfectionism is the voice of the oppressor, the enemy of the people. It will keep you cramped and insane your whole life.” Anne Lamott’s Bird by Bird: Some Instructions on Writing and Life (public library) is among my 10 favorite books on writing — a treasure trove of insight both practical and profound, timelessly revisitable and yielding deeper resonance each time. Lamott adds to the collected wisdom of great writers with equal parts candor and conviction, teaching us as much about writing as she does about creativity at large and, even beyond that, about being human and living a full life — because, after all, as Lamott notes in the beginning, writing is nothing more nor less than a sensemaking mechanism for life:

The Hames Report We are responsible not only for what we do but also for what we could have prevented Peter Singer - Ethicist Leaders across the world, young and old, men and women, in every sector of society, are encountering a moral dilemma that is fundamentally different from the many ethical dilemmas they face every day of the week. Creativity, the Gift of Failure, and the Crucial Difference Between Success and Mastery by Maria Popova The lost art of learning to stand “where we would rather not and expand in ways we never knew we could.” “You gotta be willing to fail… if you’re afraid of failing, you won’t get very far,” Steve Jobs cautioned.

Seth Godin on Vulnerability, Creative Courage, and How to Dance with the Fear: A Children’s Book for Grownups by Maria Popova “If you just pick one human you can change for the better, with work that might not work — that’s what art is.” At the 2014 HOW conference, Debbie Millman, host of the excellent interview show Design Matters and a remarkable mind, sat down with the prolific Seth Godin to discuss courage, anxiety, change, creative integrity, and why he got thrown out of Milton Glaser’s class. She used an unusual book of Godin’s as the springboard for their wide-ranging conversation: V is for Vulnerable: Life Outside the Comfort Zone (public library) — an alphabet book for grownups illustrated by Hugh MacLeod with a serious and rather urgent message about what it means and what it takes to dream, to live with joy, to find our purpose and do fulfilling work.

Pixar Cofounder Ed Catmull on Failure and Why Fostering a Fearless Culture Is the Key to Groundbreaking Creative Work by Maria Popova Why the greatest enemy of creative success is the attempt to fortify against failure. “Make New Mistakes. Make glorious, amazing mistakes. Make mistakes nobody’s ever made before,” Neil Gaiman urged in his commencement-address-turned-manifesto-for-the-creative life.

Kierkegaard on Anxiety & Creativity by Maria Popova “Because it is possible to create — creating one’s self, willing to be one’s self… — one has anxiety. One would have no anxiety if there were no possibility whatever.” “Anxiety is love’s greatest killer,” Anaïs Nin famously wrote.