The Upside of Pessimism. I have pretty low expectations for this article. 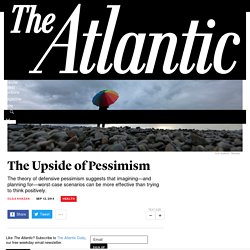 Oh sure, I spent a lot of time on it, and I personally think it’s a great read. But I’m kind of worried that you will hate it. Worse yet, I’m afraid you’ll hate me for writing it. You might take to Twitter and call me a featherbrained, elitist millennial. Tips for Helping Kids Adopt a Growth Mindset. Some people are just jerks, and not much can be done to change them. 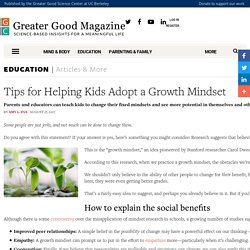 Do you agree with this statement? If your answer is yes, here’s something you might consider: Research suggests that believing in the human capacity to change is linked to less depression, better health, and greater achievement. This is the “growth mindset,” an idea pioneered by Stanford researcher Carol Dweck. It’s the opposite of a “fixed mindset,” the idea that people are born either smart or not, kind or not, strong or not—and people just don’t change all that much. According to this research, when we practice a growth mindset, the obstacles we’re facing seem more surmountable.

We shouldn’t only believe in the ability of other people to change for their benefit, however. That’s a fairly easy idea to suggest, and perhaps you already believe in it. How to explain the social benefits. Don’t Let Shame Become a Self-Destructive Spiral. Executive Summary After a major mistake, it’s natural to feel ashamed. 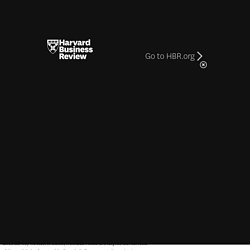 But shame is also a powerfully destructive feeling. Left to fester, it can have a profound effect on our psychological well-being. It’s concealed behind guilt; it lurks behind anger; it can be disguised as despair and depression. How can we learn to let it go? Steven, the VP operations of a media company, was asked to present on the organization’s digital transformation program to its top 100 executives during an annual strategy retreat.

Given the way we react to shame, it shouldn’t come as a surprise that the roots of the word derive from an older Proto-Indo-European word meaning “to cover.” After a major mistake, it’s natural to feel ashamed. Down the Rabbit Hole People who pathologically feel shame tend to internalize and overpersonalize everything that happens to them. The 3 Stages of Failure in Life and Work (And How to Fix Them) One of the hardest things in life is to know when to keep going and when to move on. 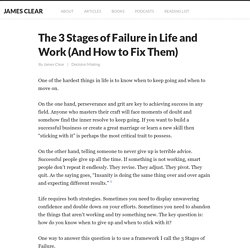 On the one hand, perseverance and grit are key to achieving success in any field. Anyone who masters their craft will face moments of doubt and somehow find the inner resolve to keep going. If you want to build a successful business or create a great marriage or learn a new skill then “sticking with it” is perhaps the most critical trait to possess. On the other hand, telling someone to never give up is terrible advice. 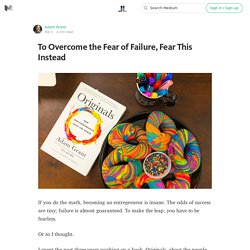 The odds of success are tiny; failure is almost guaranteed. To make the leap, you have to be fearless. Or so I thought. I spent the past three years working on a book, Originals, about the people who champion new ideas to drive creativity and change in the world. They all felt the same fear of failure that the rest of us do. When most of us fear failure, we walk away from our boldest ideas. Carol Dweck: "The Growth Mindset". Brene Brown: The power of vulnerability. Brené Brown at TEDxHouston. 8 talks about learning from failure. Global Issues Fighting the growing deserts, with livestock: Allan Savory at TED2013 The growing desert Allan Savory has dedicated his life to studying management of grasslands. 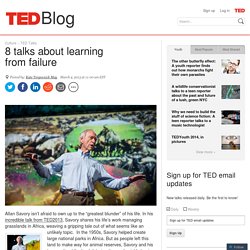 And if that doesn’t sound exciting, just wait, because it touches on the deepest roots of climate change and the future of the planet. “The most massive, tsunami, perfect storm is bearing down on us,” is the grim beginning to Savory’s talk. […] Environment Let’s unite as Team Humanity to revive degraded land: A conversation with TED Books author Allan Savory and rancher Gail Steiger All over the world, land is turning into desert at an alarming rate.

Overcoming the Fear of Failure. Alain de Botton: A kinder, gentler philosophy of success. Failures, Screw-ups and Unknowns (and why they can be good for you)* It is said that failure is a necessary precursor to ultimate success. 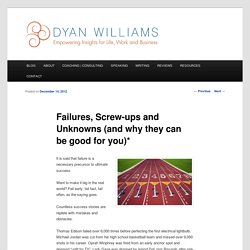 Want to make it big in the real world? Fail early, fail fast, fail often, as the saying goes. Countless success stories are replete with mistakes and obstacles. Thomas Edison failed over 6,000 times before perfecting the first electrical lightbulb. Michael Jordan was cut from his high school basketball team and missed over 9,000 shots in his career. A failure that results from well-designed and well-intentioned experimentation can be worthy of praise. Reframe How You Think About Failure by Changing Its Definition.