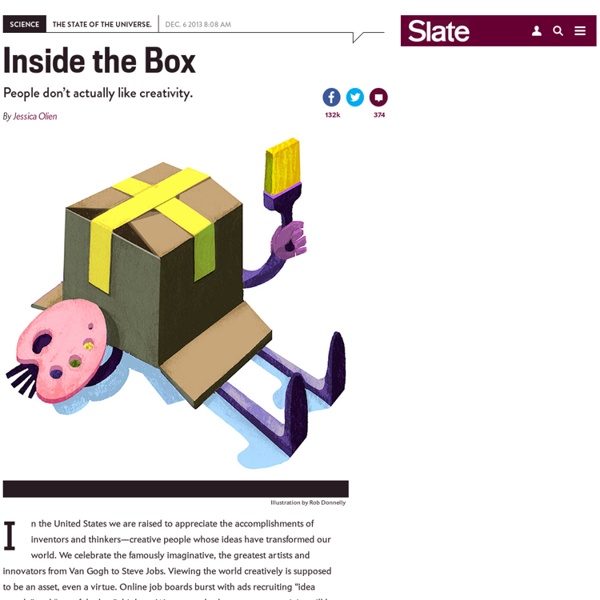 Illustration by Rob Donnelly In the United States we are raised to appreciate the accomplishments of inventors and thinkers—creative people whose ideas have transformed our world. We celebrate the famously imaginative, the greatest artists and innovators from Van Gogh to Steve Jobs. Viewing the world creatively is supposed to be an asset, even a virtue. It’s all a lie. “We think of creative people in a heroic manner, and we celebrate them, but the thing we celebrate is the after-effect,” says Barry Staw, a researcher at the University of California–Berkeley business school who specializes in creativity. Staw says most people are risk-averse. Even people who say they are looking for creativity react negatively to creative ideas, as demonstrated in a 2011 study from the University of Pennsylvania. A close friend of mine works for a tech startup. This is a common and often infuriating experience for a creative person. To live creatively is a choice. Related:  Ideas • Stuff

Will chimps soon have human rights? | World news Tommy, 26, lives on a trailer lot in Gloversville, New York, with only a television for company. Tommy is a chimpanzee, and if the organisation seeking to free him and move him to a sanctuary wins a lawsuit it filed today, the result could have implications for how we view – and treat – our closest animal relatives. Tommy is one of four chimps the Nonhuman Rights Project will be representing. Kiko, also thought to be 26, lives in Niagara Falls, and has been trained in martial arts, though his sparring partner Charlie, "the karate Chimp", is now dead. The other two, Hercules and Leo, are "being held" at a university, where they are used for biomechanical research. The Nonhuman Rights Project was set up by a legal scholar, Steven M Wise, in 2007, with the aim of conferring "personhood" on animal species. He has two arguments – one of liberty, and one of equality.

The Fertile Unknown My 2 cents on purpose today - based on lessons learned from years of cultivating, evolving and living my purposeful work...and working with others to do the same. Purpose and Synchronicity When we first start living into our purpose, we notice more "synchronicities" in our every day life - those seemingly unrelated happenings that come together in an unplanned, yet meaningfully and uniquely relateable way for us. It can show up in all kinds of ways...like you might have been wondering how to do x and then suddenly you seemingly randomly sit next to the expert of x in the plane. I believe this is because inspired purpose acts as a beacon around which purposeful people, events, and situations emerge - like a homing device. Purpose + creativity + serving a greater good breeds aligned purposefulness, which is holistically generative - for your self, for others and for the whole. Sometime we hear what is ours to do loud and clear, but we resist doing it. Here are 4 Reflection Points for now:

the poststructural anarchist Todd May interviewed by Richard Marshall. Todd May is the poststructuralist anarchist who thinks anarchism is more than just a critique of the state, that there is more than one struggle, that Foucault, Deleuze and Lyotard are important, that postructuralism is elusive, that anarchism is bottom-up and liberalism is top-down, that ‘how might one live?’ is the down and dirty question, that Foucault’s thought will remain standing when the dust is settled, that what it means to be human is a matter of practices, that Ranciere gets him emotionally, that friendship offers a different model from neo-liberalism and that his conception is about resistance not cohesion. High Five! 3:AM: What made you become a philosopher? Todd May: Many philosophers I talk with seem to get their start in philosophy from a teacher, often a college professor, that turns them on to the subject. 3:AM: You’ve written about and are associated with ‘poststructuralist anarchism.’ TM: Poststructuralism is an elusive term.

Kapor Capital How and when to book a cheap flight | Travel It's the classic traveller's dilemma. When is the best time to book a flight for the cheapest deal? Do you bag a flight as early as possible or risk leaving it until the last minute? The answer, according to flight comparison website Skyscanner, is to wait, but not for too long. After an epic piece of number crunching of two million flight searches over three years Skyscanner has come up with the ideal time to book 10 summer sun destinations. Flights to Spain, for example, are at their cheapest (£153 for a return) five weeks before departure, while the cheapest flights to Greece (£228 return) are available just three weeks ahead. However, Filip Filipov of Skyscanner advises that while five weeks is the average, the optimum time to book your flight can vary significantly between destinations. The best time for flights to Turkey, for example, is 13 weeks before departure, while the US should be booked five months (21 weeks) ahead. Ryanair Seats released for sale 8-12 months in advance.

MEGA Marx: Berfrois Interviews Jonathan Sperber by Russell Bennetts Jonathan Sperber is a social historian and Curators’ Professor of History at the University of Missouri. His most recent publication is Karl Marx: A Nineteenth-Century Life. Russell Bennetts is the editor of Berfrois. Berfrois Was Karl Marx an anti-Semite? Sperber Historians are notoriously reluctant to give yes-or-no answers to any question, and this one is a particularly apt candidate for an ambivalent response. There is another side to Marx’s attitude, though. In order to understand Marx’s position, we need to see that being Jewish in mid-nineteenth century Europe was regarded primarily as a matter of religious and cultural affiliation. A good example of Marx’s attitude can be seen in a letter he wrote to Engels concerning a trip he took in 1875 from London to Karlsbad (today’s Karlovy Vary in the Czech Republic). How did his personal relationship with Fredrich Engels develop over the years? The two collaborated intellectually and politically over the next four years.

Arts & Letters Daily - ideas, criticism, debate Here's What a 9.2 Earthquake Can Do to a City Having just lived through 10,000 quakes and aftershocks I can tell you that you better get your shit together if you live in a quake prone area. Work out where you will meet important people as chances are the cellular system will be overloaded (and on a related note don't get rid of your landline). Have an old cell phone with good battery and topped up SIM in it as smartphones suck in emergency. Something like an old Nokia that will last for days and days without a charge. The bike is your friend in a state of emergency, cars suck... all petrol stations close, all roads get blocked and in some cases (like ours) there is crazy amounts of flooding. Bikes can go way more places. Don't have any stupid heavy stuff on your walls unless extremely well secured. Make sure you have a decent supply of booze (and other stuff like food, but booze is key!!). Get a battery powered radio, keep a torch by your bed (you won't want to suck up your phone battery, trust me). Get to know your neighbours.