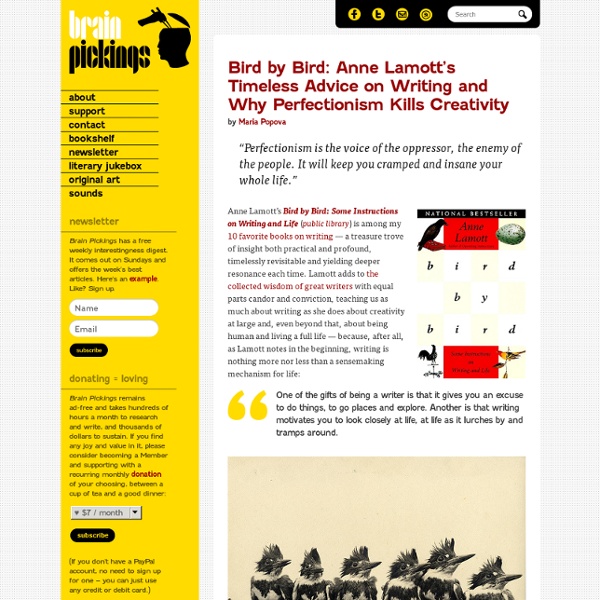 by Maria Popova “Perfectionism is the voice of the oppressor, the enemy of the people. It will keep you cramped and insane your whole life.” Anne Lamott’s Bird by Bird: Some Instructions on Writing and Life (public library) is among my 10 favorite books on writing — a treasure trove of insight both practical and profound, timelessly revisitable and yielding deeper resonance each time. Lamott adds to the collected wisdom of great writers with equal parts candor and conviction, teaching us as much about writing as she does about creativity at large and, even beyond that, about being human and living a full life — because, after all, as Lamott notes in the beginning, writing is nothing more nor less than a sensemaking mechanism for life: One of the gifts of being a writer is that it gives you an excuse to do things, to go places and explore. I started writing when I was seven or eight. I still encourage anyone who feels at all compelled to write to do so. But, one might wonder, why?

Related:  Creativity and Courage, Failure • Tips • Many rules of writing • About Writing

Secrets of The Phantom Tollbooth: Norton Juster and Jules Feiffer on Creativity, Anxiety, and Failure by Maria Popova “Failure is a process … you have to fail over and over and over again to get anything that’s worthwhile.” In 1961, a young architect by the name of Norton Juster received a grant for a book on urban perception and settled down at his house in Brooklyn Heights to write it. Struggling with the process, however, he began toying with a playful story about a boy named Milo in an effort to distract himself from the burden of his workload, and showed his drafts to his neighbor, an emerging political cartoonist named Jules Feiffer. Juster never wrote the urbanism book — instead, he teamed up with Feiffer and together they dreamt up The Phantom Tollbooth, which went on to become one of the most celebrated children’s books of all time, brimming with timeless philosophy for grown-ups — its map of The Kingdom of Wisdom alone is a profound metaphor for curiosity and the human condition. Map of The Kingdom of Wisdom from ‘The Phantom Tollbooth’

Aerogramme Writers' StudioPixar's 22 Rules of Storytelling These rules were originally tweeted by Emma Coats, Pixar’s Story Artist. Number 9 on the list – When you’re stuck, make a list of what wouldn’t happen next – is a great one and can apply to writers in all genres. You admire a character for trying more than for their successes.You gotta keep in mind what’s interesting to you as an audience, not what’s fun to do as a writer. They can be very different.Trying for theme is important, but you won’t see what the story is actually about til you’re at the end of it. Now rewrite.Once upon a time there was ___. Every day, ___. Writer as Coder: The Iterative Way to Write a Book : zen habits By Leo Babauta The traditional way of writing a book is like the old Microsoft model of developing software: you write it in isolation for a year or two, and then put it out as a fully-formed product. The problem with that method is that it’s never been tested in the real world. You don’t know if readers (or users) will want it, you don’t know where you’ve made huge mistakes, you don’t know how it will work in the wild. That “Microsoft” model of making programs has been replaced in the last decade or so by iterative programming, where you make a Minimum Viable Product as soon as possible, and let a small group of people (alpha or beta testers) use it and give you feedback and report bugs.

The Workhorse and the Butterfly: Ann Patchett on Writing and Why Self-Forgiveness Is the Most Important Ingredient of Great Art by Maria Popova “The ability to forgive oneself … is the key to making art, and very possibly the key to finding any semblance of happiness in life.” “All makers must leave room for the acts of the spirit,” Ursula K. Le Guin wrote in her lucid and luminous essay on where ideas come from and the “secret” of writing. “But they have to work hard and carefully, and wait patiently, to deserve them.” 5 Timeless Books of Insight on Fear and the Creative Process by Maria Popova From Monet to Tiger Woods, or why creating rituals and breaking routines don’t have to be conflicting notions. “Creativity is like chasing chickens,” Christoph Niemann once said. But sometimes it can feel like being chased by chickens — giant, angry, menacing chickens. Whether you’re a writer, designer, artist or maker of anything in any medium, you know the creative process can be plagued by fear, often so paralyzing it makes it hard to actually create.

How to Break the Rules of Writing (& More) According to Bestselling YA author Ransom Riggs Like most first conversations and bad first drafts, my (WD’s Managing Editor Adrienne Crezo) interview with Ransom Riggs begins with a discussion about the weather. And not just any weather, either, but peculiar versions of standard precipitation: dust storms, cloudbursts, thundersnow and tornadoes. Of course, Riggs is experiencing none of those phenomena as he sits in the warmth of the never-ending summer of Los Angeles. “I hate to tell you what it’s like here right now,” he says. “No, I don’t. It’s gorgeous. What I’ve Learned as a Writer : zen habits By Leo Babauta I’ve been a professional writer since I was 17: so nearly 24 years now. I’ve made my living with words, and have written a lot of them — more than 10 million (though many of them were duplicates).

The Psychology of Writing and the Cognitive Science of the Perfect Daily Routine Reflecting on the ritualization of creativity, Bukowski famously scoffed that “air and light and time and space have nothing to do with.” Samuel Johnson similarly contended that “a man may write at any time, if he will set himself doggedly to it.” And yet some of history’s most successful and prolific writers were women and men of religious daily routines and odd creative rituals. (Even Buk himself ended up sticking to a peculiar daily routine.) Such strategies, it turns out, may be psychologically sound and cognitively fruitful. In the altogether illuminating 1994 volume The Psychology of Writing (public library), cognitive psychologist Ronald T. Fail Safe: Debbie Millman's Advice on Courage and the Creative Life By Maria Popova The seasonal trope of the commencement address is upon us as wisdom on life is being dispensed from graduation podiums around the world. After Greil Marcus’s meditation on the essence of art and Neil Gaiman’s counsel on the creative life, here comes a heartening speech by artist, strategist, and interviewer extraordinaire Debbie Millman, delivered to the graduating class at San Jose State University.

3 Tips for Writing Heavy Emotional Scenes Yesterday, I tweeted a link to a great post by Sally Apokedak about not cheating the reader by skipping emotional scenes. Some writers struggle with heavy scenes. They’re uncomfortable with “invading” the privacy of their characters. They worry about creating laughably cheesy scenes. Or they think a scene that’s essential to the emotional journey is unnecessary because the reader already knows what will happen. However, those aren’t good reasons for avoiding writing certain scenes. Magical Mornings: How to start your day with more creativity, serenity, and insight — Better Humans Each morning our return to waking life is marked by a unique mental state. In those first minutes of our day, our minds are in an estuary between the dream world and 3rd dimensional consciousness. Like an aquatic estuary, it’s ripe with nutrients and lifeforms that you can’t find anywhere else. This in-between state of the mind can be used for greater creativity, serenity, and flow. For many years I squandered these golden minutes.

David Foster Wallace on Writing, Self-Improvement, and How We Become Who We Are by Maria Popova “Good writing isn’t a science. It’s an art, and the horizon is infinite. You can always get better.” Seth Godin on Vulnerability, Creative Courage, and How to Dance with the Fear: A Children’s Book for Grownups by Maria Popova “If you just pick one human you can change for the better, with work that might not work — that’s what art is.” At the 2014 HOW conference, Debbie Millman, host of the excellent interview show Design Matters and a remarkable mind, sat down with the prolific Seth Godin to discuss courage, anxiety, change, creative integrity, and why he got thrown out of Milton Glaser’s class. She used an unusual book of Godin’s as the springboard for their wide-ranging conversation: V is for Vulnerable: Life Outside the Comfort Zone (public library) — an alphabet book for grownups illustrated by Hugh MacLeod with a serious and rather urgent message about what it means and what it takes to dream, to live with joy, to find our purpose and do fulfilling work. I had the pleasure of seeing and recording the conversation — transcribed highlights below.