Sarah Lewis: Embrace the near win 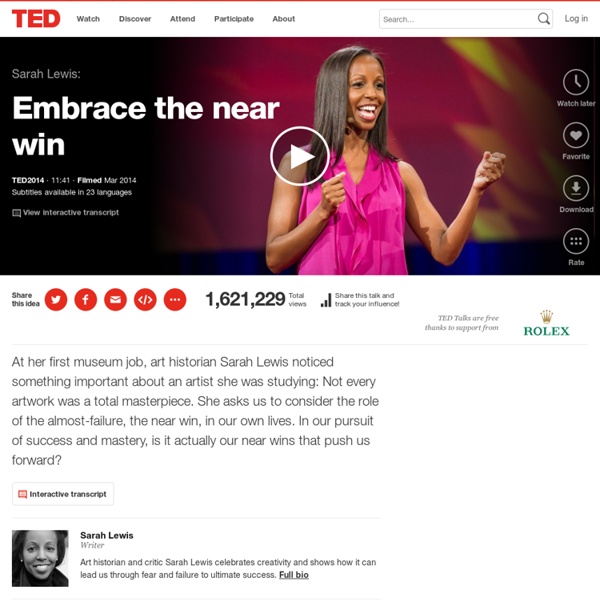 Treat Failure Like a Scientist Exam results - Family Lives After the exams Immediately after the hard work and pressure of exams, parents and young people may feel relieved and relaxed. This may soon give way to an even more stressful period - waiting for and dealing with exam results. Children may get caught up in endless repetitions of regret and recrimination, going over what they did or failed to do and how they might have done it differently. Feeling on edge and unhappy is a natural response to the situation. Waiting for exam results Have a conversation with your son or daughter to find out what their expectations are, and give them the reassurance that whatever the results, you are proud of them and will be encouraging them in the future. If your child is applying for University, equip yourself with information about how to use the clearing system for UCAS (the admissions system for university) as there may be a lot of competition for places. What to do if your child's exam results aren’t what you were expecting

JK Rowling's life advice: ten quotes on the lessons of failure JK Rowling has some inspirational advice for graduating students – or for anyone in this universe, really. Her new book, Very Good Lives: The Fringe Benefits of Failure and the Importance of Imagination, out on 14 April, is her 2008 commencement speech at Harvard University, published by Little, Brown. Proceeds from sales will be donated to Lumos, a charity for disadvantaged children founded by Rowling, and to a financial aid programme at Harvard. Some of her wisdom from that speech, for those of you who weren’t in the Harvard audience, is collected below. Rowling, who came from a family where her imagination was seen as “an amusing personal quirk that would never pay a mortgage, or secure a pension”, struggled considerably before becoming one of the world’s most successful authors: seven years after graduating, “I had failed on an epic scale. The writer based her speech – the most viewed commencement speech on Harvard’s website – on “failure and imagination”. On the benefits of failure

A Princeton psychology professor has posted his CV of failures online | Business News 1/35 Heathrow third runway poses ‘serious obstacle’ to fight against climate change - Tuesday October 25 Environmental groups expressed dismay at the Government’s decision to give a third runway at the airport the go-ahead – and Greenpeace vowed to challenge it in the courts. Allowing Heathrow to expand will create “a serious obstacle” to meeting the UK’s commitments on climate change and reducing air pollution, a leading scientist has warned. Reclaim the Power 2/35 Nearly 10,000 people in China apply for one job - Monday October 24 Nearly ten thousands Chinese jobseekers are competing for one position: an officer worker at a political organisation.China's annual civil service recruitment drive began on October 15, with more than 27,000 vacancies on offer in over 120 central departments - drawing about 1.4 million applicants this year.

untitled How to raise a brilliant child without screwing them up Where does the drive to succeed come from? And if it results in exceptional achievement (as defined by external norms such as power, status and wealth) does that have to go hand in hand with being a troubled, agonised person? The latest evidence suggests that genes play little part – see box below – and that nurture is critical, whether it be carrot or stick. In my case, for instance, purely because I was the only boy with three sisters, I was treated completely differently by my father. I would go so far as to say that, had I been swapped at conception with one of my sisters, she would be writing these words. At the simplest level, performance is nurtured through teaching – for good or ill. Then there is modelling. Which brings us to identification, in which the child makes the parent’s behaviour or injunctions part of themselves. The love bit is obvious enough. But, while there are exceptions, it’s maltreatment that seems to fuel exceptional achievement more than anything. Do … Don’t …