Retro-Future: To The Stars! "QUANTUM SHOT" #322Link - by Avi Abrams Rare & Beautiful Vintage Visions of the Future This is the start of a new series: an extensive collection of the most inspiring and hard-to-find retro-futuristic images. 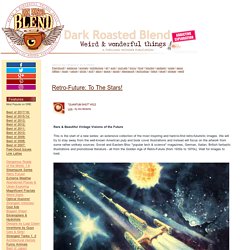 We will try to stay away from the well-known American pulp and book cover illustrations and instead will focus on the artwork from some rather unlikely sources: Soviet and Eastern Bloc "popular tech & science" magazines, German, Italian, British fantastic illustrations and promotional literature - all from the Golden Age of Retro-Future (from 1930s to 1970s). Wait for images to load. (source: TM-1970, Russia) ("Galactic Manoeuvre", by Nikolai Nedbailo) (source: TM-1953, Russia) (source: TM-1956, Russia) (image credit: retro-futurismus.de) Part 1. Retro-futuristic art, in a way, can be called a double-fantasy: imaginary future wrapped in imaginary past. Earth's Orbit: (TM cover, Russia, 1950) (images credit: Klaus Burgle) To the Moon!

Retro Futurism. 10 Of The Worst Fears That Designers Have. Creative Market knows what the designers fear. 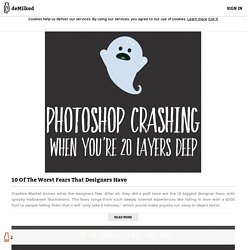 After all, they did a poll! Here are the 10 biggest designer fears with spooky Halloween illustrations. The fears range from such deeply internal experiences like falling in love with a $500 font to people telling them that it will “only take 5 minutes,” which would make anyone run away in abject terror. Nature-Inspired Tattoos Combine Vintage-Style Etchings of Fauna and Flora. Pony Reinhardt's naturalistic monochromatic tattoo pieces reflect deep artistic flair and amazing talent. 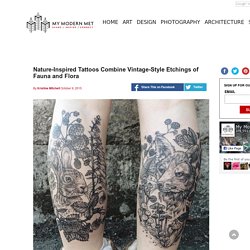 Her intrinsic tattoos are rich in detail and visual texture, and often feature elements of the natural world with a modern twist. She tattoos using vegan ink with plant-based glycerin, and is happy to accommodate each client’s unique vision into their piece. Photographer Documents His Own Depression In Self Portraits. Artist combating depression sometimes try to find an outlet through their medium, just like Edward Honaker with his self-portrait photography. 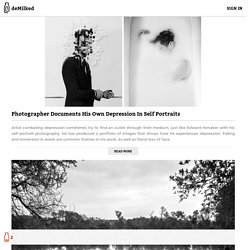 An Interview with Master Calligrapher Seb Lester. Calligrapher and type designer Sebastian “Seb” Lester is one of my favourite people to follow on Instagram (@seblester). 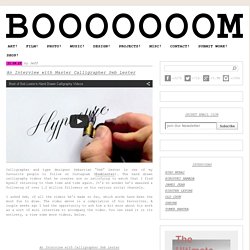 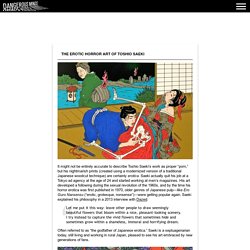 Saeki actually quit his job at a Tokyo ad agency at the age of 24 and started working at men’s magazines. His art developed a following during the sexual revolution of the 1960s, and by the time his horror erotica was first published in 1970, older genres of Japanese pulp—like Ero Guro Nansensu (“erotic, grotesque, nonsense”)—were getting popular again. Saeki explained his philosophy in a 2013 interview with Dazed: Let me put it this way: leave other people to draw seemingly beautiful flowers that bloom within a nice, pleasant-looking scenery. Street Artist Decorates A Building In Poland With Painted Lace. Street artist NeSpoon has recently transformed the wall of a building in Poland, by adding an intricate painting of traditional lace. 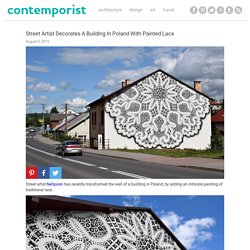 The art piece can be found in Bobowa, Poland, a town that is renowned for its traditional handmade bobbin lace. Grzegorz Wróbel (update) Grzegorz Wróbel is a Polish watercolorist who I first wrote about in 2010. 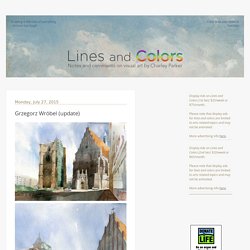 Wróbel’s background in architectural design gives his cityscapes and street scenes a feeling of effortless strength that belies the complex challenge of perspective and rendering they present. He deftly steps between detail and suggestion, giving his compositions both a tactile immediacy and and a feeling of loose, painterly handling. Particularly effective is his use of light and shadow amid the architectural forms to give them dimension and presence. His website is in Polish, but just use the drop-down menu under “Galeria” to browse galleries. Be aware that the Exhibition 2012 gallery has sub-galleries. You can also find his work on his deviantART gallery, including a number of portraits, and on the site of Galeria Sztuki Napora. For more, see my previous post on Grzegorz Wróbel. Photoshop Genius Erik Johansson Reveals How His Mind-Bending Images Are Made. Want to manipulate photos like a master? 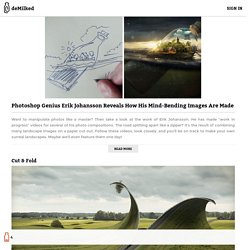 Then take a look at the work of Erik Johansson. He has made “work in progress” videos for several of his photo compositions. The road splitting apart like a zipper? It’s the result of combining many landscape images on a paper cut out. Follow these videos, look closely, and you’ll be on track to make your own surreal landscapes. Dynamic, Figurative Sculptures Balance Precariously on the Streets of Historic Village. From April 4 to June 30, the French village of Mougins was transformed into an open-air art gallery displaying the work of contemporary sculptors Niki de Saint Phalle, Sacha Sosno, Théo Tobiasse, Arman, César, Steph Cop, and Nicolas Lavarenne. 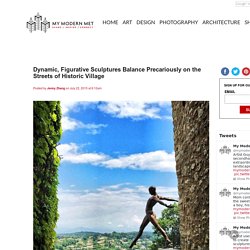 Twenty-one sculptures were installed in village squares, tiny alleyways, and overlooking gorgeous natural landscapes. Created by the City of Mougins in partnership with the Museum of Classical Arts, the special exhibit Mougins Monumental invited visitors to take an art-inspired stroll through a historical village known for attracting famous creatives like Francis Picabia, Pablo Picasso, and Man Ray. Of the 21 sculptures exhibited in Mougins, several were the work of Nicolas Lavarenne, a self-taught sculptor born in 1953.

With a career spanning several decades, Lavarenne is known for his sculptures of human figures balancing precariously in unexpected places. Terrifying Animal Skeletons Crocheted From String Inherited From Dead Family Members. Skeletons aren’t made of yarn – but Caitlin T. McCormack has made a lot of them. Her animal skeletons are crocheted from yarn and then solidified with glue. The works are intricate and look extremely fragile, just like old animal bones that have spent time in the ground. Her works come in several forms, from single skulls (in jars) to complete skeletons to skeleton “families.” Caitlin T. More info: caitlinmccormack.com | instagram | twitter (h/t: laughingsquid) Clever Minimalist Posters Turn Famous Movies into Paper Art - My Modern Met.

Spanish design studio Atipo has created Papeles de cine, a collection of beautifully minimalistic movie posters made of clever paper art. As part of a promotional campaign to announce the new Paper Gallery website by create graphic service provider Minke, each poster uses the unique weight, texture, and color of different sheets of paper to create sleek works of art and design. These "papers for characters" were each manipulated by hand to produce clever representations of iconic films like Frankenstein, Bonnie and Clyde, Jaws, and The Curious Case of Benjamin Button. Everyday Sayings Turned Into Clever Illustrations By Artist Nabhan Abdullatif.

EmailEmail Nabhan Abdullatif, a professional Oman-based graphic designer and illustrator, comes up with brilliant ways to express our most common everyday phrases and slang with cute minimalistic illustrations. Abdullatif specializes in conceptual illustration and vector art, which is evident in his clever visual puns. In Abdullatif’s mind, sayings like “just in case” or “what’s up?” Get interpreted in their most literal forms.

Don’t forget to check Abdullatif’s galleries for more images and his online shop. Russian Artist Adds Her Fat Cat Zarathustra To Iconic Paintings. EmailEmail A few years ago, Russian artist Svetlana Petrova started re-creating the most iconic paintings in art history by adding her beloved fat ginger cat Zarathustra to them. “I lost my mother in 2008 and she left me Zarathustra. I got horrible depression after her death and for two years I was unable to do something creative,” recalls Petrova to BBC. “I’ve had cats before and included them in my work, like playing in theatre shows and I’ve made costumes for them. Bright Idea: Coil Lamp by Castor — KNSTRCT - Carefully Curated Design News.

At the end of a chain reaction, an Apple adaptor links power to Castor’s Coil Lamp – try wrap your head around that one. Lightweight, effortless and effective, simply plug the LED lamp into an Apple adapter and watch it glow. Designer Brian Richer explains that the Mac computer circuit tricks the adapter to turn on, and in turn power the lamp. As he had built up a small collection of adapters over the years, it occurred to him that there must be more they could do – they could let there be light. Hirotoshi Ito’s Incredible Stone Sculptures Totally Rock. Japanese artist Hirotoshi Ito breathes life into stone by transforming it into practically anything but stone itself. Artist Inserts Funny Cartoons Into The Real World With Transparency Sheets.

Adorable Girl Grows Up and Continues to Love Animals Like Her Own Siblings. Artist Creates Beautiful Tattoos That Are Anything But Traditional. EmailEmail The tattoos of a bygone era, championed by sailors, bikers and rebels, have a healthy share of supporters among modern tattoo enthusiasts, but there’s also plenty of room for innovation.