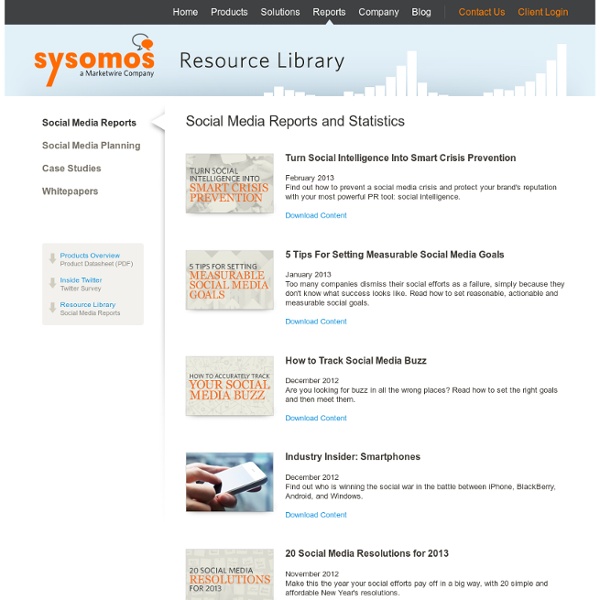 Turn Social Intelligence Into Smart Crisis Prevention Find out how to prevent a social media crisis and protect your brand's reputation with your most powerful PR tool: social intelligence. How to Get Social Media Influencers Talking About Your Brand 6 tips to help you identify and build strong relationships with social influencers. How to Track Social Media Buzz Are you looking for buzz in all the wrong places? 8 Ways to Build Your Brand with Social Media Quick tips for using social media to strengthen your company's brand. 6 Best Practices For Influencer Marketing Getting the right people excited and talking about an organization's products or services has always been one of the best ways to improve brand recognition, expand customer base, and ultimately drive more sales. 5 Tips For Setting Measurable Social Media Goals Too many companies dismiss their social efforts as a failure, simply because they don't know what success looks like.

DIYbio/FAQ From OpenWetWare DIYbio FAQ v1.5: "The biohacker's FAQ" This FAQ for DIYbio is actively maintained by it's editors, and by you! The Importance of Active Community Management - Proved With Real I think most community experts would agree that active community management and ongoing strategy are vital to a community’s health. However, I don’t know if anyone has been able to fully quantify the impact using actual community metrics. Until now – when I decided to analyze some of the 2008 data for my former community during the period of active management and the period of passive management. I was the community manager for a professional community from January 2007 through July 2008. During that time, the community grew from zero to 4,000 members. We were rigorous with the tracking of metrics and updated community analytics weekly through a combination of our platform reports and Google Analytics.

The Five WORST Excuses for Not Using Twitter If you're as pro-Twitter as I am, you've probably heard a lot of your Twitter-hater friends give some pretty crazy excuses for why they won't use Twitter. I myself have some particularly close friends who simply refuse to Tweet - and they're always making excuses for why they won't do it. Luckily I've invested a lot of time and energy into arguing with them - so you don't have to. Check out these five worst excuses for not using Twitter , along with some snappy comebacks you can throw back at them: Twitter’s Official Analytics Product Has Arrived Twitter has started inviting a select group of users to test a new analytics product, Mashable has learned. Such a product has been rumored for some time, and a Twitter executive said earlier this year that Analytics would debut by the end of 2010. With Twitter Analytics, users will be able to see a plethora of data about their account; for example, information about which tweets are most successful, which tweets caused people to unfollow, and who the most influential users are that reply and retweet their messages. In the images below, you can see how some of this data is charted. A bar graph over 6-hour increments shows you mentions, follows and unfollows, for example, and you can filter tweets by categories that are defined as "best," "good," and "all." In what will no doubt come as a blow to the third-party vendors that are already providing similar tools, we’re hearing that the product will be free and that Twitter has no immediate plans to charge.

Understanding the Digital Natives They see life as a game. They enjoy nothing more than outsmarting the system. They don’t trust politicians, medias, nor brands. Social Network Statistics inShare0 Source: Shutterstock Social Networks are among the most powerful examples of socialized media. They create a dynamic ecosystem that incubates and nurtures relationships between people and the content they create and share. As these communities permeate and reshape our lifestyle and how we communicate with one another, we’re involuntarily forcing advertisers and marketers to rapidly evolve how they vie for our attention. Facebook, MySpace, Twitter, Yelp, and other online communities transformed the regimen and practice of marketing “at” people into an opportunity to engage and interact with us – on our terms.

10 Tips To Get Retweeted On Twitter Retweeting is the most effective way of sharing information you like on Twitter. Apart from the obvious, most people ask what makes a retweet different from a tweet? Recently I came across Dan Zarrella's data of retweets, where she helps us further understand why people retweet things, and this might help you. 1. Include Links Retweets tend to contain links, Zarrella explains - 56.69% of retweets contain a link versus 18.96% of normal tweets. Small Business: Why Negative Keywords are Essential, and How they Work If you’ve ever heard me speak at one of our monthly Introduction to Advertising on Bing & Yahoo! Search webinars, you’re likely familiar with my explanation of negative keywords and the observation that in my experience, I believe they are a necessity for all search advertising campaigns. If you’re a fairly advanced search user that understands the hierarchy of negative keywords and already uses them effectively, this blog post may not be for you.

Tools and Metrics You Need to Measure and Monitor Social Media S If you want to be able to track the success of a social media campaign (and for that matter any online marketing campaign) you have to benchmark and measure against something. If you want to start a social media campaign tomorrow then you need to make sure you have the tools and metrics to measure, today. You can’t just use a tool that gives you a snapshot of your overall social media presence, you need something with numbers that you can compare and benchmark against. This is what corporations and executives are looking for. Competitors on Twitter: Evaluate With Your Eyes Wide Open If you’ve done your listening exercises (monitoring the social landscape through keyword searches) you may have discovered your competition is on Twitter. As a part of your own social media strategy and planning audit, it’s important to evaluate what your competition is doing, how they are connecting with influencers and how quickly they’re advancing on this network. Working through a competitive intelligence exercise means getting past the obvious and digging into an audit with your eyes wide open. Of course, you’ll immediately check out how many followers your competitors have and the lists where they appear. And, yes, you should review their tweet stream to figure out their approach. You can also scour through their followers to see the influencers they’ve connected with and the level of engagement.