Digital Inspiration: A Technology Blog on Software and Web Appli 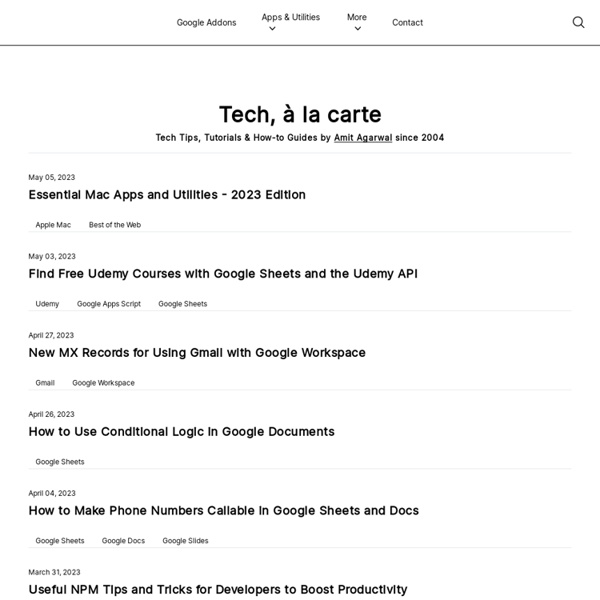 64 Things Every Geek Should Know « Caintech.co.uk If you consider yourself a geek, or aspire to the honor of geekhood, here’s an essential checklist of must-have geek skills. The term ‘geek’, once used to label a circus freak, has morphed in meaning over the years. What was once an unusual profession transferred into a word indicating social awkwardness. As time has gone on, the word has yet again morphed to indicate a new type of individual: someone who is obsessive over one (or more) particular subjects, whether it be science, photography, electronics, computers, media, or any other field. A geek is one who isn’t satisfied knowing only the surface facts, but instead has a visceral desire to learn everything possible about a particular subject.

Lens distortion correction on post-processing Lens distortion is a technical aspect often overlooked by photographers. Strong lens distortion can ruin a good picture, especially when photographing people or architecture. This form of optical aberration is caused by how the lens projects the light rays over the flat sensor or film surface. A perfectly rectilinear lens would project the light rays absolutely aligned on the sensor plane, no matter where on the frame, while a real world lens, always bearing some degree of distortion, bends those rays unequally throughout the frame. This distortion doesn’t depend on the focal length of the lens, although it’s more often seen on wide angles or megazoom lenses. Golden Trumpet Tree - Tabebuia alba. Google is ripping out Chrome's awful new bookmark manager Late last year, Google launched a new bookmark manager for Chrome but the overhaul wasn’t that popular with users. After months of silence, Google has quietly confirmed that it’s ripping out the new bookmark manager and rolling back to the old one. The ill-fated overhaul of Chrome’s bookmark manager When Google launched the new bookmark manager complaints started quickly flowing in on the Google Product Forums that it was confusing and hard to use. Despite the u-turn, the company said that “the team will continue to explore other ways to improve the bookmarks experience” and those that “enjoyed the new experience” can keep it for now by installing this extension.

The 90 best infographics Every picture tells a story, as they say, but sometimes it takes a clever combination of words and pictures to tell a story quickly, concisely and in an entertaining fashion. The best infographics may look like they were simple to create in Photoshop, but designing an effective piece of data visualization is usually anything but. There are several great tools to create infographics, but these examples of infographics from around the web will show you how you can take it a step further and add a bit of style and personality to your data. Some are older than others, but they can still provide some inspiration for those of you looking to create an infographic from scratch. Some are funny, some more serious, and all are inspiring examples of the art. If Star Wars: The Last Jedi has put you in the mood to immediately watch the original movie, hold your horses just one second.

What's the best technical talk you've heard I just watched it and thought it was great. She is well spoken and clear. But I sort of thought this was common knowledge. I made a related comment here: (and before the Ruby Gems YAML exploit, which maybe was kind of prescient) Incidentally, I felt she sort of brushed off computational complexity when once person brought it up. Complexity is just as important as computability/decidability, and it fits very well with her formal language perspective (e.g. regular languages can be recognized in linear time and constant space).

Chat with Your Friends through ms dos Command Prompt - StumbleUpon -: Chat with Friends through ms dos Command Prompt :- 1) All you need is your friend's IP Address and your Command Prompt. 2) Open Notepad and write this code as it is.....! Take Better Pictures with Your Mobile Phone Photography isn’t limited to point and shoot cameras and DSLRs. A lot of phone manufacturers are putting high resolution cameras into their phones making them viable photographic tools. Apple, Samsung, HTC, etc. are pushing the phone photography into a new level. Understanding SSD over-provisioning The over-provisioning of NAND flash memory in solid state drives (SSDs) and flash memory-based accelerator cards (cache) is a required practice in the storage industry owing to the need for a controller to manage the NAND flash memory. This is true for all segments of the computer industry—from ultrabooks and tablets to enterprise and cloud servers. Essentially, over-provisioning allocates a portion of the total flash memory available to the flash storage processor, which it needs to perform various memory management functions. This leaves less usable capacity, of course, but results in superior performance and endurance.

Top 4 Sites To Access Your Favourite Links From One Page There are a hundred and one ways to bookmark your favourite websites, whether it’s using your browser’s native bookmarking system or using an online service like Delicious or Google Bookmarks, each of which has its pros and cons. One con is that after a while, your bookmarks can become hard to manage. Using a visual bookmarking website as your homepage is the best way to access favorites at hand for quick and easy access. Each of these services have their own unique added features, including RSS feeds, inbuilt search, tabs, groups, and bookmarklets for easily adding new bookmarks. Favetop Python: package gdata.photos __builtin__.object AlbumDataGPhotosBaseData CommentDataTagDataUserData PhotoData atom.AtomBase(atom.ExtensionContainer)