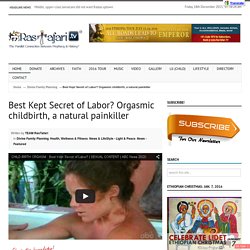 Instead of agony, childbirth can be ecstasy: the LABOR ORGASM! Watch it happens when you transform pain into sensations through natural breathing and hypnobirthing techniques. Watch this film and get in on the worlds best-kept secret: labor and birth can be pleasurable-even ecstatic. Better yet, pleasurable birth enhances the health of both mother and baby and creates a positive foundation for a lifetime. 20 Kids' Books That Defy Gender Stereotypes. From an early age kids are bombarded with messages that rigidly define gender: Boys like pirates and sports and being rough, and girls are sweet princesses who love all things pink and sparkles. 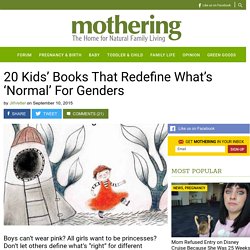 Even many children’s books still promote harmful gender stereotypes for both boys and girls; limiting how they play, dress, and express themselves. But these 20 books break the mold and show the importance of diversity in gender roles, giving all kids a chance to see the many ways they can be themselves, whether they’re a boy who loves pink sparkly things, or a rough and tumble girl who loves sports—or even the other way around. 1. When the Bees Fly Home by Andrea Cheng. Sensitive, artistic Jonathan isn’t sturdy enough to help his father with bee keeping, but when a drought hits, the family struggles to make ends meetand Jonathan uses his art skills to save the day.

Why Brazil Loves Breastfeeding. RIO DE JANEIRO—The other day here, I saw something I rarely encounter back home in Washington. 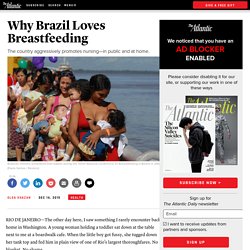 A young woman holding a toddler sat down at the table next to me at a boardwalk cafe. When the little boy got fussy, she tugged down her tank top and fed him in plain view of one of Rio’s largest thoroughfares. No blanket. No shame. It's not just that Cariocas are far less body-conscious than Americans. For women who can’t breastfeed, the country offers “milk banks.” Along with dozens of other countries—but not the U.S. StoryCorps: At The Root Of It All, A Little Girl's 'Grandmapal' Left Her Lifelong Love. Chloe Longfellow, 32, on a recent visit with StoryCorps. 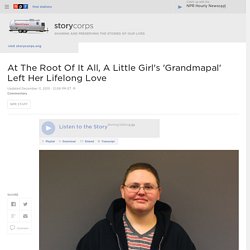 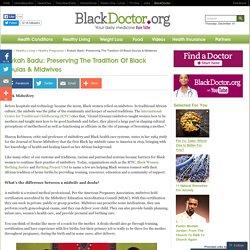 In traditional African culture, the midwife was the pillar of the community and keeper of sacred traditions. The International Center for Traditional Childbearing (ICTC) cites that, “Grand (Granny) midwives taught women how to be mothers and taught men how to be good husbands and father, they played a large part in shaping cultural perceptions of motherhood as well as functioning as officiate in the rite of passage of becoming a mother.” Sharon Robinson, critic and professor of midwifery and Black health care systems, states in her 1984 study for the Journal of Nurse-Midwifery that the first Black lay midwife came to America in 1619, bringing with her knowledge of health and healing based on her African background.

I Feel Guilty for Not Wanting Children. I don’t want children. 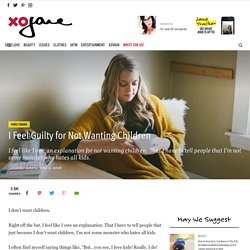 Right off the bat, I feel like I owe an explanation. That I have to tell people that just because I don’t want children, I’m not some monster who hates all kids. We Need to Start Talking About Miscarriage  I knew it was gone the moment I saw the blood. 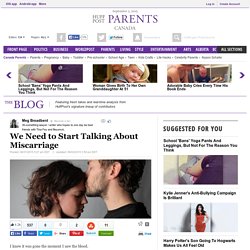 It. It? I don't know. The pregnancy? The fetus? Him. The morning after it happened, I got an alert on my phone from my pregnancy app, just like I did every Saturday. Later that evening I did see the spine. Onician Wood - Onician Wood a partagé un lien. 11 Brutally Honest Reasons Why Millennials Don't Want Kids. When it comes to embarking on the journey of parenthood, lots of millennials are saying, "Meh. 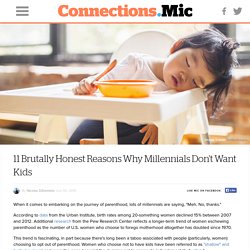 No, thanks. " According to data from the Urban Institute, birth rates among 20-something women declined 15% between 2007 and 2012. Additional research from the Pew Research Center reflects a longer-term trend of women eschewing parenthood as the number of U.S. women who choose to forego motherhood altogether has doubled since 1970. 12 Hilarious Comics That Nail The Reality Of Parenthood. Greeting card artist and dad of two Brian Gordon wanted to create a comic that was a bit more personal than usual. 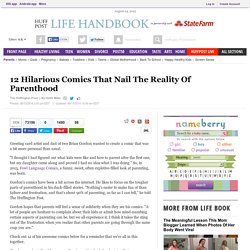 "I thought I had figured out what kids were like and how to parent after the first one, but my daughter came along and proved I had no idea what I was doing. " So, in 2013, Fowl Language Comics, a funny, sweet, often expletive-filled look at parenting, was born. Gordon's comics have been a hit across the internet. Why Child-Free Aunties Are Amazing  My children, like many lucky kids, have an amazing auntie. 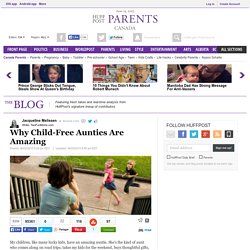 She's the kind of aunt who comes along on road trips, takes my kids for the weekend, buys thoughtful gifts, and organizes living-room dance parties whenever she's over. Your Child Should Never Be Forced to Hug Anyone (Yes, Including a Relative) – Here Are 7 Reasons Why. (Content Warnings: incest, rape, and sexual violence) Two of my good friends had their first baby late this past year. From the get-go, Baby was a cuddly little girl. The Science Of Spanking: What Happens To Spanked Kids When They Grow Up? Teen pregnancy low in 'sleepover' country of the Netherlands. America’s battle over sex education could be boiled down to one question: Would you let your teenager spend the night with his or her sweetheart in your home? When 32 American parents were asked this question, 29 said no, including one mother who blurted out, “No way, Jose!” Said Amy Schalet, author of the new book “Not Under My Roof: Parents, Teens and the Culture of Sex.” But in the Netherlands, where rates of teen pregnancy, birth and abortion are low, 24 out of 26 parents said that yes, under the right circumstances, they would let their teenager spend the night with their steady boyfriend or girlfriend.

“If you are ready … say it honestly, and use the pill,” one Dutch mother told her teenage daughter, who now regularly sleeps with her boyfriend in the family home. Want to Be a Feminist Parent?: 4 Goals to Consider. A few drinks while pregnant isn’t bad, but the new maternal puritanism is. Ironically, I didn’t even need caffeine before I was pregnant. Most mornings my mental cobwebs used to clear themselves within a half-hour without chemical help.

So when, during my first appointment, my midwife asked how much caffeine I drank, I blithely replied, “oh, maybe a few cups a week.” This minimal amount pleased her greatly. Then came extreme pregnancy fatigue, bringing with it the need to either ingest a daily cuppa or sleep away the entire morning. It also brought paranoia and mixed messages. I decided that a morning coffee or tea was fine. His tone wasn’t judgmental, just matter of fact. These concerns come out of a desire that every baby be born perfectly healthy. Both women decided that the mandate to drink absolutely no alcohol is extremely overblown. This isn’t a suggestion that extreme caution give way to extreme abandon – I won’t be sitting in a hot tub eating oysters and drinking champagne anytime soon, alas. Imaginary friends. A New Children's Book Explains What "Witch" Really Means.

Thinking about being a witch for Halloween? Consider forgoing the warts and pointy hat for a more historically accurate costume—like dressing up as Joan of Arc and Anne Boleyn. Throughout the ages, women who transgressed societal norms have been named witches and faced punishments like imprisonment and death. Author and artist Lisa Graves tells their misunderstood stories in History’s Witches, a engaging 32-page book for kids released by Xist Publishing last month. The book uses an engaging, illustrated infographic style to draw readers in. Graves also runs site History Witch, which updates frequently with the tales of both famous and little-known witches in history, complete with their own illustrations.

8 Silliest Things People Say When I Tell Them I Don't Want Kids. October 23, 2013 | The Radical Notion That Children Are People.