IPT Journal - "The Tide Has Turned for The Falsely Accused of Sexual Abuse: A Christian Perspective" Robert G. 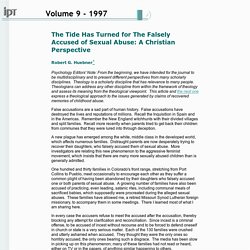 Huebner* Psychology Editors' Note: From the beginning, we have intended for the journal to be multidisciplinary and to present different perspectives from many scholarly disciplines. Theology is a scholarly discipline that has relevance to many people. Theologians can address any other discipline from within the framework of theology and assess its meaning from the theological viewpoint. This article and the next one express a theological approach to the issues generated by claims of recovered memories of childhood abuse.

False accusations are a sad part of human history. A new plague has emerged among the white, middle class in the developed world, which affects numerous families. One hundred and thirty families in Colorado's front range, stretching from Port Collins to Pueblo, meet occasionally to encourage each other as they suffer a common plight of having been abandoned by their daughters who falsely accused one or both parents of sexual abuse. Recent Changes John F. IPT Journal - "The Effects of a False Allegation of Child Sexual Abuse on an Intact Middle Class Family" Darrell W. 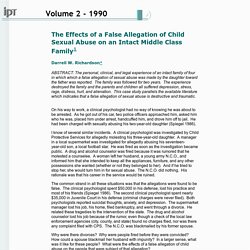 Richardson* ABSTRACT: The personal, clinical, and legal experience of an intact family of four in which which a false allegation of sexual abuse was made by the daughter toward the father was reported. The family was followed for two years. The experience destroyed the family and the parents and children all suffered depression, stress, rage, distress, hurt, and alienation. This case study parallels the available literature which indicates that a false allegation of sexual abuse is destructive and traumatic. On his way to work, a clinical psychologist had no way of knowing he was about to be arrested. I know of several similar incidents. The common strand in all these situations was that the allegations were found to be false. Why were there divorces? This study examined the experience of a formerly intact middle-class family, victimized by false allegations of child and sexual abuse.

The Problem. You Won't Remember, But I Will  How to repair your relationship with your child. We're talking about rebuilding trust here. 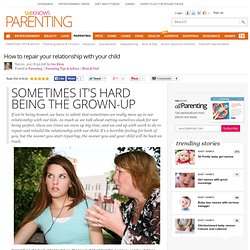 The parent-child relationship is primary, and for whatever reason, your child has lost some trust in you. It's not a being angry about discipline thing, it's not something frivolous or superficial, it's not a lot of things. It is making some mistake -- that you may or may not have realized at the time -- that has deeply hurt your child. Hurt is irrational Your child is hurt and you feel bad -- and those hurt feelings may come out in irrational ways. Careful about guilt. 10 Things to Stop Saying to Your Kids (and What to Say Instead) The Bully Too Close to Home. “Love is not something we give or get; it is something that we nurture and grow, a connection that can only be cultivated between two people when it exists within each one of them – we can only love others as much as we love ourselves.” 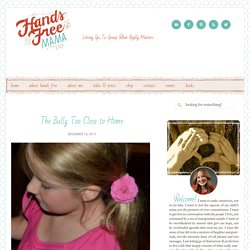 –Brene Brown During the two years of my overly distracted life, I communicated more to a screen than to the people in my family. My schedule was so tightly packed that I constantly found myself saying, “We don’t have time for that.” And because there wasn’t a minute to spare, that meant no time to relax, be silly, or marvel at interesting wonders along our path. I was so focused on my “agenda” that I lost sight of what really mattered.

Calling all the shots was a mean voice in my head. Discussing Teenage Defiance. By James Dobson, Ph.D. 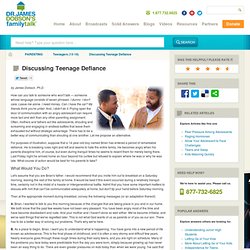 How can you talk to someone who won't talk — someone whose language consists of seven phrases: I dunno. I don't care. Leave me alone. I need money. Can I have the car? For purposes of illustration, suppose that a 14-year-old boy named Brian has entered a period of remarkable defiance. What Would You Do? Let's assume that you are Brian's father. Then at the appropriate moment during breakfast, convey the following messages (or an adaptation thereof): A. B. Empowering Parents. What can you do when your child just refuses to get up and go to school? You’ve yelled, nagged, pleaded and even tried bribing her, but she just digs her heels in and says, “Nope, not going, no matter what you do.” Maybe this has never happened to you—or maybe it happens every day. Many parents may read this scenario and immediately respond, “I’d make my kid go!” But without using physical means, how would you do that? If a child outright refuses to comply, other than grabbing her arm and physically forcing her to do get dressed and get on the bus—which no parent wants to do or ever should do, for that matter—what options does a parent have?

In reality, once we let go of trying to control our child’s behavior and choices, we actually gain much more power. Related: Defiance—or ODD? A very common theme in raising a defiant child, or a child with Oppositional Defiant Disorder, is control. Why Do We Fight Our Child for Control? Pressure from Society. Identifying What Is In Your Control.