Beyond NaNoWriMo: Writing Challenges for Everyone. By Theryn Fleming (Beaver) Every October, the internet buzzes as thousands of writers start thinking about characters and plots in anticipation of National Novel Writing Month. 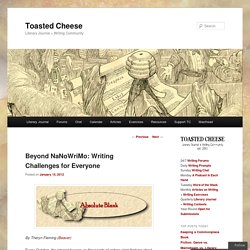 Meanwhile, others start grumbling about why they won’t be participating in NaNoWriMo. We’ve all heard these complaints (or uttered them ourselves): “I’m too busy in November.” “I write, but not fiction (or novels).” And so on. So what’s a writing challenge? While just having a concrete goal to work toward can be motivating in itself, working toward it with a group of people doing the same can more so, because all those doubts you have about your ability to succeed are mitigated. Finally, writing challenges put writing into terms that non-writers can understand. Participating in a writing challenge for a writer is much like participating in a running event for a runner.

Picture Book Dummy Challenge Founded by the #kidlitchat administrators (@kidlitchat) in 2011. List of timed artistic challenges - Wikiwrimo. NaNoWriMo has inspired many timed challenges within and outside of writing. 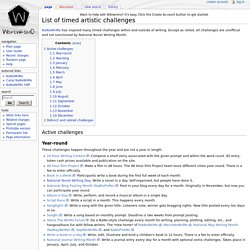 Except as noted, all challenges are unofficial and not sanctioned by National Novel Writing Month. Active challenges Year-round These challenges happen throughout the year and are not a year in length. 24 Hour Writing Contest: Compose a short story associated with the given prompt and within the word count. $5 entry, token cash prizes available and publication on the site.48 Hour Film Project: Make a film in 48 hours. Year-long These challenges start at various times throughout the year and last for a full year. WriYe: Write several novels in a year, often involving setting your own goals.6 Months, 6 Novels: Write a novel every other month, starting in January.Milwordy: The quest to write a million words in a year.The 365 Project: Take a photo every day for a year. January February March April Camp NaNoWriMo: Write a 50,000 word (or other goal) project in a month. May June July August September October Spectober! November. Start your photo journal today!

About WNFIN/NaNonFiWriMo. During the Write Nonfiction in November (WNFIN) Challenge, also known as National Nonfiction Writing Month (NaNonFiWriMo), you are personally challenged to start and complete a work of nonfiction in 30 days. 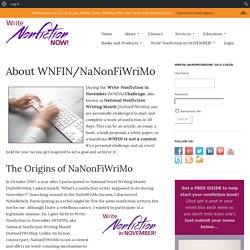 This can be an article, an essay, a book, a book proposal, a white paper, or a manifesto.WNFIN is not a contest. It’s a personal challenge and an event held for you—so you get inspired to set a goal and achieve it. The Origins of NaNonFiWriMo In October 2007, a year after I participated in National Novel Writing Month (NaNoWriMo), I asked myself, “What’s a nonfiction writer supposed to do during November?” Searching around in the NaNoWriMo forums, I discovered NaNoRebels. So, I gave birth to Write Nonfiction in November (WNFIN), aka National Nonfiction Writing Month (NaNonFiWriMo). I feel strongly about educating writers so they can succeed. When November rolled around the next year, I enlisted help—27 expert guest bloggers. As of 2009, this blog, Write Nonfiction NOW! 5 Writing Challenges That Will Help You Dominate 2016. Was your New Year’s resolution to write more? 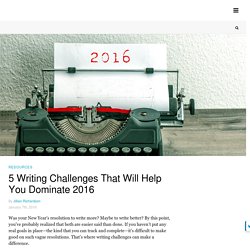 Maybe to write better? By this point, you’ve probably realized that both are easier said than done. If you haven’t put any real goals in place—the kind that you can track and complete—it’s difficult to make good on such vague resolutions. That’s where writing challenges can make a difference. Not only will these challenges give you small milestones to work toward, but some will also give you the opportunity to get in touch with a supportive community if you run into complications. 1.

Once a quarter, the Ultimate Blog Challenge becomes a virtual event mostly run through a Facebook page with about 10,000 members. Participants get daily emails with inspirational prompts as well as the chance to network with fellow bloggers. 2. If you aspire to be the next Great American Novelist but haven’t even finished your outline yet, this mega-challenge is for you.