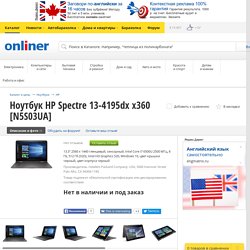 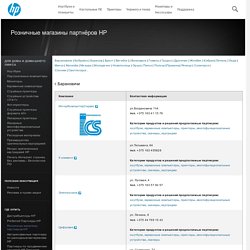 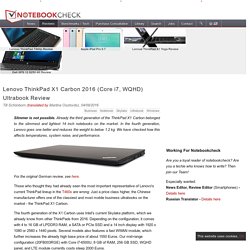 With a net transfer rate of about 50 MB/s (TP-Link Archer C7, 3 meters distance, line of sight), the Carbon cannot completely keep up with the impressive 70 MB/s of the T460s with the same module, but it still achieves a decent result. During our test, we could not complain about range and connection stability. On top of that, our test model has a WWAN card from Sierra Wireless on board, which ensures fast internet connection via UMTS, HSPA+, and LTE Cat. 6 on the move.

As so often, the webcam above the display only features a resolution of 1280 x 720 pixels and the recordings are accordingly blurry. Moreover, images suffers from quite faint colors and visible noise (especially in low light scenarios), but almost all competitors show similar weaknesses. Security Accessories Maintenance. 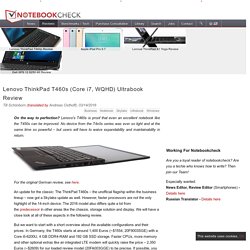 Even though the theoretical maximum transfer rate of 867 Mbps (2x2 802.11ac) did not change compared to the predecessors Wireless-AC 7260/7265, the module manages new records at 70 MB/s in our measurements (TP-Link Archer C7, short distance). Range and signal quality are above average as well. Mobile Internet connections for the T460s are provided by a WWAN module from Huawei, which also supports GNSS location services (like GPS) besides the mobile standards UMTS/HSPA/LTE.

Almost on the expected low level is the quality of the webcam. The Best Notebook Displays As Reviewed By Notebookcheck. Notebookcheck's Top 10 Convertibles. Microsoft's proposal for the next generation notebook has already advanced to the fourth round. 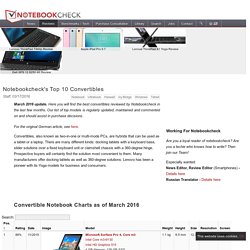 The Microsoft Surface Pro 4 combines tablet and notebook in a very mobile, handy shape. The Pro model of the Surface not only stands out with a steep price, but it also claims best possible performance. Notebook 9 spin (13.3" LED QHD+ / Core ™ i7) Computer (Internal) HDD Capacity. 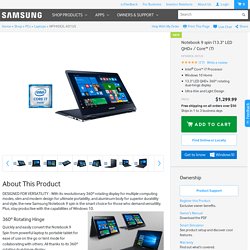 Actual formatted capacity may vary. External Hard Disk Drive (HDD) Capcity. Best ultrabooks and ultraportable laptops of 2016 - buying guide and tips. I never liked lugging around heavy computers, but my work requires me to have some sort of notebook nearby most of the time. 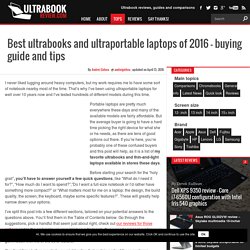 That’s why I’ve been using ultraportable laptops for well over 10 years now and I’ve tested hundreds of different models during this time. Portable laptops are pretty much everywhere these days and many of the available models are fairly affordable. But the average buyer is going to have a hard time picking the right device for what she or he needs, as there are tens of good options out there. If you’re here, you’re probably one of these confused buyers and this post will help, as it is a list of my favorite ultrabooks and thin-and-light laptops available in stores these days. Before starting your search for the “holy grail”, you’ll have to answer yourself a few quick questions, like “What do I need it for?”

I’ve split this post into a few different sections, tailored on your potential answers to the questions above. Table of contents – best 2016 ultrabooks. Samsung ATIV BOOK 9 Spin - an owner's review. The Samsung ATIV BOOK 9 Spin is a recent entry in the premium tier of 2-in-1 ultraportables and a direct competitor for the HP Spectre X360 and the Lenovo Yoga 900. 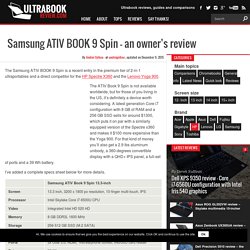 The ATIV Book 9 Spin is not available worldwide, but for those of you living in the US, it’s definitely a device worth considering. A latest generation Core i7 configuration with 8 GB of RAM and a 256 GB SSD sells for around $1300, which puts it on par with a similarly equipped version of the Spectre x360 and makes it $100 more expensive than the Yoga 900. For that kind of money you’ll also get a 2.9 lbs aluminum unibody, a 360-degrees convertible display with a QHD+ IPS panel, a full-set of ports and a 39 Wh battery. I’ve added a complete specs sheet below for more details. Now, if you’re looking for a premium hybrid 13-incher, you probably read our comparison of the Yoga 900 and the Spectre x360, based on our reader’s Ash impressions, who bought both of them in his quest for the perfect ultraportable. Samsung ATIV BOOK 9 Spin - an owner's review. Lenovo Yoga 900 vs HP Spectre X360 - an owner's experience. If you’re in the market for a premium 13-inch convertible with Skylake hardware and don’t have an unlimited budget to spend, the Lenovo Yoga 900 and the HP Spectre x360 are pretty much the only viable option to consider right now. 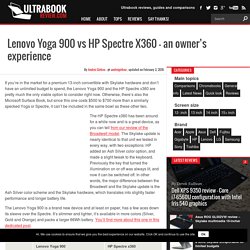 Otherwise, there’s also the Microsoft Surface Book, but since this one costs $500 to $700 more than a similarly specked Yoga or Spectre, it can’t be included in the same bowl as these other two. The HP Spectre x360 has been around for a while now and is a great device, as you can tell from our review of the Broadwell model. The Skylake update is nearly identical to that unit we tested in every way, with two exceptions: HP added an Ash Silver color option, and made a slight tweak to the keyboard.

Previously the key that turned the illumination on or off was always lit, and now it can be switched off. The Lenovo Yoga 900 is a brand new device and at least on paper, has a few aces down its sleeve over the Spectre. But how do these actually compare in daily use? Lenovo Yoga 900 reviews and how it fares against the Yoga 3 Pro. The Yoga 900 is Lenovo’s top-of-the-line consumer ultraportable for the end of 2015 and the first part of 2016. 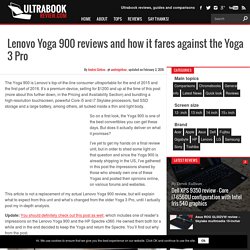 It’s a premium device, selling for $1200 and up at the time of this post (more about this further down, in the Pricing and Availability Section) and bundling a high-resolution touchscreen, powerful Core i5 and i7 Skylake processors, fast SSD storage and a large battery, among others, all tucked inside a thin and light body. So on a first look, the Yoga 900 is one of the best convertibles you can get these days. But does it actually deliver on what it promises? I’ve yet to get my hands on a final review unit, but in order to shed some light on that question and since the Yoga 900 is already shipping in the US, I’ve gathered in this post the impressions shared by those who already own one of these Yogas and posted their opinions online, on various forums and websites.

Best 25 2-in-1 laptops - ultrabook convertibles and tablet hybrids. Convertibles, or 2-in-1 laptops as they are also called, are not necessarily a new breed of portable computers. Tablet PCs have been used in business environments since the 1990’s, but they’ve become a lot more popular among regular users in the later years, as their price has gone down and more form-factors were introduced to the market. We’re going to talk about the best 2-in-1s available today in this post.

But first, let’s see what you should expect from such a device. First of all, convertible ultrabooks need to be slim and light, while able to deliver solid-everyday performance and long battery life, and second, they need to include some sort of convertible or detachable touchscreen. Best ultrabooks and ultraportable laptops of 2016 - buying guide and tips. Notebookcheck's Top Windows Alternatives to the MacBook Pro 13 and 15.

Asus Zenbook UX303LB - gaming ultraportable with Nvidia 940M graphics. The Asus Zenbook UX303LN was one of the the few 13-inch ultraportables that could handle games well in the last year and while Asus has updated the series to Broadwell hardware, they also quietly launched a new model earlier in 2015: the Zenbook UX303LB, with Broadwell processors and newer Nvidia 940M graphics. This series has been available in stores for a few weeks here in Europe and should make it to the US as well by the end of June, based on the scarce info available right now. This post gathers my overall impressions on the product and how I feel it compares to the UX303LN series. There is one thing you should know from the beginning, the Zenbook UX303LB is only a minor update of the UX303LN.

Update: There’s an updated version of the UX303LB, called the Zenbook UX303UB, which is pretty much the same device, but with Skylake hardware inside. Follow this link for more details. The only changes hide inside Let’s take a closer look at the CPUs. Everything else is the same. The complete list of Skylake portable laptops and ultrabooks. There’s a new Intel hardware platform in preparation for the end of 2015 and most of 2016, called Skylake. In the past, I’ve provided you with comprehensive lists of all the ultraportable laptops built on the Intel Haswell and later the Broadwell platforms, and since those posts were highly appreciated, this article does pretty much the same thing for this latest Intel hardware series.

Тип графического адаптера. Сравнить ASUS Zenbook UX303UB-R4094T, HP Spectre 13-4195dx x360 [N5S03UA], HP Spectre 13-4105dx x360 [N1R86UA], ASUS Zenbook UX305UA-FB004R, Lenovo Yoga 900-13ISK [80MK00JTRK], Lenovo Yoga 900-13ISK [80MK00G5PB], Lenovo Yoga 900-13ISK [80MK00G4PB], Lenovo. Selecting the Right USB-Ethernet Adapter for your Computer and Network. You’re a consultant, and you stride into a new client’s office with your Macbook Air, only to discover they’ve disabled WiFi for security reasons. You pull out your Windows tablet in a hotel room, but the only internet available is coming through a wire on the desk. You’re a gamer and you’re tired of watching helplessly as your frozen character dies of WiFi-induced lag. You plug your computer into your brand new Gigabit fiber optic connection, and it’s no faster than before. A USB to Ethernet adapter can be the answer in each of these scenarios.